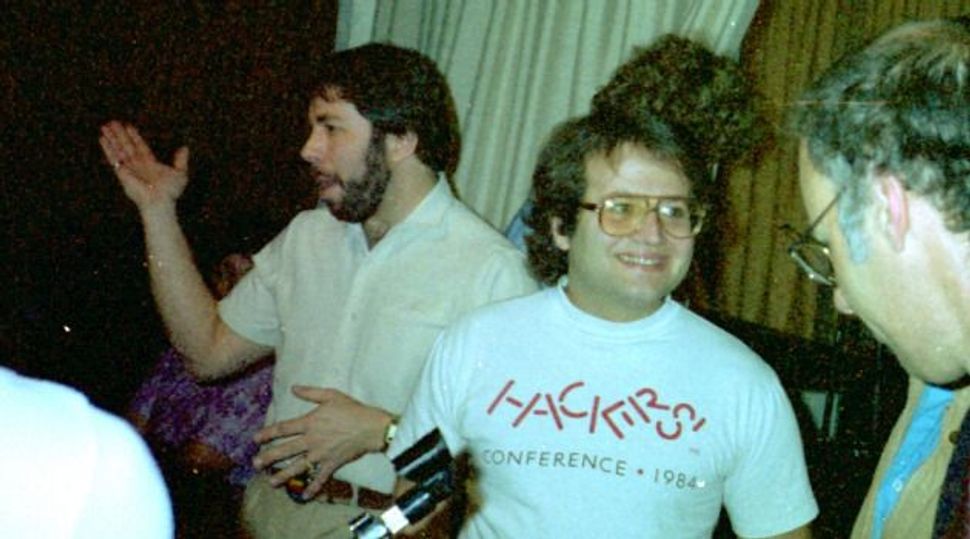 Jewish at Its Core: Andy Herzfeld (right), seen here with Steve Wozniak in 1985, has been called ?the soul of Apple.? Image by Wikimedia Commons

Thirty years ago, a revolutionary Super Bowl commercial by Apple boldly proclaimed that “1984 won’t be like 1984” because of the imminent arrival of the Macintosh computer. Two days later, on January 24, a young Steve Jobs officially introduced the computer that would change the history of personal computing. But behind the charismatic, bow-tied genius (the mock turtleneck would come later), stood one of the most creative, hard-working and diverse group of women and men ever assembled — the original Macintosh team. And if you take peek behind the curtain of Steve Jobs’s “reality distortion field,” you may be surprised to find an unusually Jewish beginning to this iconic computer.

Let’s begin at the beginning, at a place only a few miles from Apple headquarters: the experimental computer lab at Xerox’s Palo Alto Research Center. In 1970, Jacob Goldman, the chief scientist for Xerox, had a far-reaching vision that foresaw the expanding role computers would play in the workplace. A Brooklyn-born son of a jeweler and a Yeshiva University graduate himself, Jack (as he was known) managed to convince the skeptical leadership of Xerox to allow him to establish a facility adjacent to Stanford University, and to recruit top researchers who would invent computing technologies that would revolutionize the computer industry, such as the mouse, networked office, and a graphical user interface that included folders and a desktop.

This laboratory was closed to the public, but a few lucky people in the nascent industry were able to sneak a peak at the groundbreaking work of Xerox’s PARC laboratories. Among them was Steve Jobs, who was so inspired by what he saw at the labs that several of the Mac’s key features were influenced by innovations first created at Goldman’s PARC.

Under Jobs’s leadership, Apple introduced the personal computer to the world. But the task of creating a new, more user-friendly and powerful machine was given to the 31st Apple employee, Jef Raskin. In 1979, Raskin assembled the team that would create the Macintosh (which he named after his favorite apple). In an article for the online DigiBarn Computer Museum, Raskin wrote, “The computer was something on a higher plane entirely… Instead of making it do ones’ bidding by assembling and connecting parts, you made it do what you wanted with words… I come from a culture where the Word was held in esteem, words had nearly magical powers… Reading and writing are taken for granted by almost everybody, but the Jewish culture my non-religious family was embedded in had not forgotten how special language is.”

Raskin wanted to design a computer that would make creation as easy as the spoken word. Both Raskin and Jobs, however, had passionate visions of what this revolutionary machine should be, and their clashes led to Raskin’s departure from Apple in 1982, as Steve Jobs took over the Macintosh project. But the final product bears many of Raskin’s imprints, such as the click and drag interface, use of “fonts,” and the QuickDraw graphics system.

Raskin may be known as the “father of the Macintosh,” but fellow Mac team member Andy Hertzfeld is known as the “soul” of the Mac software group. Hertzfeld wrote much of the code for the original Macintosh operating system, including many elements of its signature graphical user interface. Andy contributed greatly to the feel of the Mac, and the look of its interface is due in large part to Andy’s high school friend, fellow member-of-the-tribe Susan Kare, whom he recruited to design many of the Mac’s original icons and typefaces, including the Chicago font (used from the first Mac all the way through the original iPod), the command key symbol, and the iconic (literally) happy face that greeted each and every user upon startup.

There were other Jewish team members, too, such as Joanna Hoffman, daughter of Polish film director Jerzy Hoffman. She was the Macintosh’s first head of marketing whom Mac evangelist Guy Kawasaki called “the [Mac] division’s conscience.”

Every Apple fanboy (myself included) will always miss Steve Jobs pulling back the curtain on another magical device each winter. But I take at least a little solace in remembering the Jewish heart, soul and conscience of the original Macintosh, and the talented engineers, artists and others who helped usher in the age of wonder that Jobs so masterfully perpetuated for all the years that he was at the helm of Apple.

*Eric Schulmiller has served as Cantor of The Reconstructionist Synagogue of the North Shore for the past 15 years.