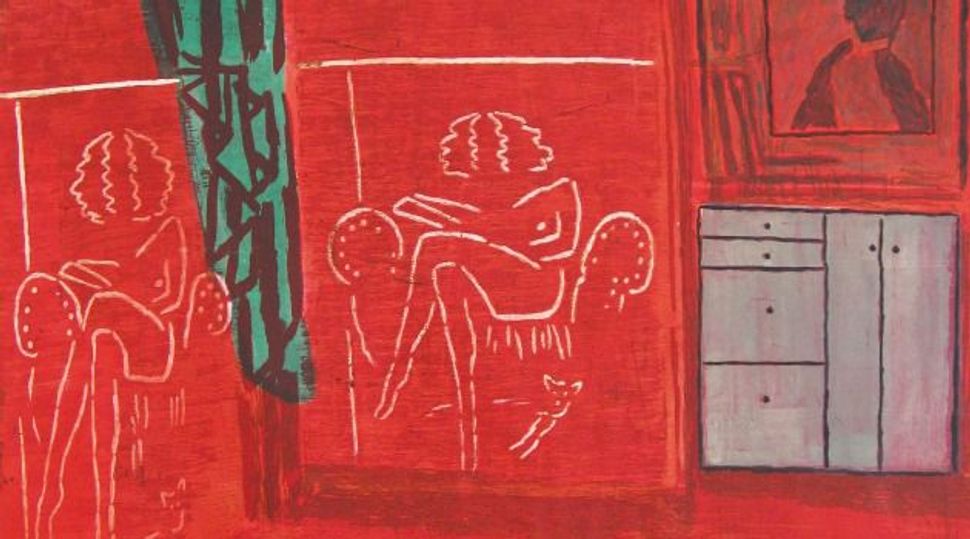 Recently, the Jerusalem Print Workshop — long the first port of call for those working in the medium of print — celebrated its 40th anniversary. For Israeli artists, the only first-rate alternative to the workshop is the [Gottesman Etching Center,][2] which opened its doors in 1993. Now, at the suggestion of Israeli artist Asaf Ben Zvi, both workshops have joined together for an exhibition at the Open Museum for Israeli Art in Tefen.

The excellent exhibit, co-curated by Irena Gordon, in-house curator at the Jerusalem Print Workshop, and Ruthi Ofek, curator at the Open Museum, presents 120 works and a selection of artist books, all of which were created at the workshops.

The Jerusalem Print Workshop and the Gottesman Etching Center both provide an atmosphere devoted to the creation and study of the print medium, while their different locations — the former on the seam line of East and West Jerusalem; the other in the more pastoral setting of Kibbutz Cabri — offer artists alternative places in which to work.

Printmaking has a rich, centuries-old tradition. The engravings and etchings of Albrecht Dürer and Francisco Goya are high points in European art. Contemporary artists such as Andy Warhol and William Kentridge have also incorporated printmaking into their practices. As Gordon writes in the catalogue text for this exhibition, “printmaking draws artists working in a wide range of mediums… and ever since the eighteenth century has been present at every aesthetic, social and political juncture in western culture.”

Print holds an unusual position in relation to the other traditional forms of expression in the plastic arts. Unlike painting or sculpture, it is essentially a shared activity involving a partnership between artist and master printer. The workmanlike setting of a print workshop — with its cast-iron printing presses and all manner of tools and materials — facilitates this partnership by serving as a meeting point between artist and artisan.

At the exhibition opening, artist and curator Larry Abramson reflected on his continued interest in the medium: “I think it’s the sense of community, working with other people. As an artist you often work alone in a studio, but at the print workshop there are always other eyes, observing and participating in the process.”

Artists are invited to the workshops for an unspecified period of time, often lasting up to a year or more, with the intention of creating a series of prints. There are many techniques open to the artist, such as etching, lithography, aquatint and screen printing, to name a few. Often there is a period of acclimatization for the artist as he or she, assisted by the master printer, engages with the various techniques on offer to discover which is best suited to his or her ideas. The printer assists the artist, enabling the creative act through the technical process. The process culminates when the metal plate on which the artist has been working is pressed onto paper and runs through the printing press.

Printing techniques, old and new, are seen in the many artworks at the Open Museum. The majority of the exhibiting artists use traditional methods, but several artists incorporate new mediums into their work. David Adika, Hila Lulu Lin and Maya Attoun incorporate photographs and photo-etchings; Yigal Ozeri and Khen Shish use mixed media and collage in their vibrantly colored and decorative works.

More traditional techniques can be seen in the woodcuts of Orit Hofshi and Erez Israeli. A print titled “Cessation” by Hofshi shows a seated figure set against a rugged, harsh terrain. Hofshi uses Japanese paper-cutting knives to make incisions of various depths on the woodblock, creating a black and white landscape alive with turbulent lines showing a dense mass of foliage and rocks.

A similar vigor of execution can be seen in the etchings of Ofer Lellouche. Lellouche views the print medium as a rigorously physical process akin to that of sculpture. The self-portrait on display is an almost faceless figure emerging out of a rough cross-hatching of interwoven lines — the result of etching and scraping on the metal plate. Throughout his career, Lellouche has drawn and painted many such abstracted figures, which appear uncertain in and of the world around them.

Both workshops encourage visiting artists to explore their respective locales and natural vegetation. Artists such as Abramson, Zadok Ben David and Sharon Poliakine consistently use images from nature in their work. Poliakine’s highly distinctive etching style can be seen in her renderings of sprawling, dangling plants and enmeshed figures. For Abramson, the Israeli landscape is a somewhat less maze-like, but no less complicated place. Israel’s political situation has often informed his work. On display are two of a series of prints Abramson created in 2003, titled “Rose of Jericho.” Abramson uses the rose as a metaphor for the city’s troubled history. In one print the rose seems to hover in space on the page; also seen are several small, black innocuous-looking spots. The accompanying print features a black ink wash that progressively covers the rose, creating a dark and ominous blot on the landscape.

For both the Jerusalem Print Workshop and the Gottesman Etching Center, the exhibition successfully highlights their devotion and commitment to a medium that generally takes a back seat to painting, sculpture and photography.

Furthermore, in its presentation of some of the medium’s newer aspects, both workshops enhance connections with other mediums and continue to forward one of their aims — to advance and develop the language of printmaking.