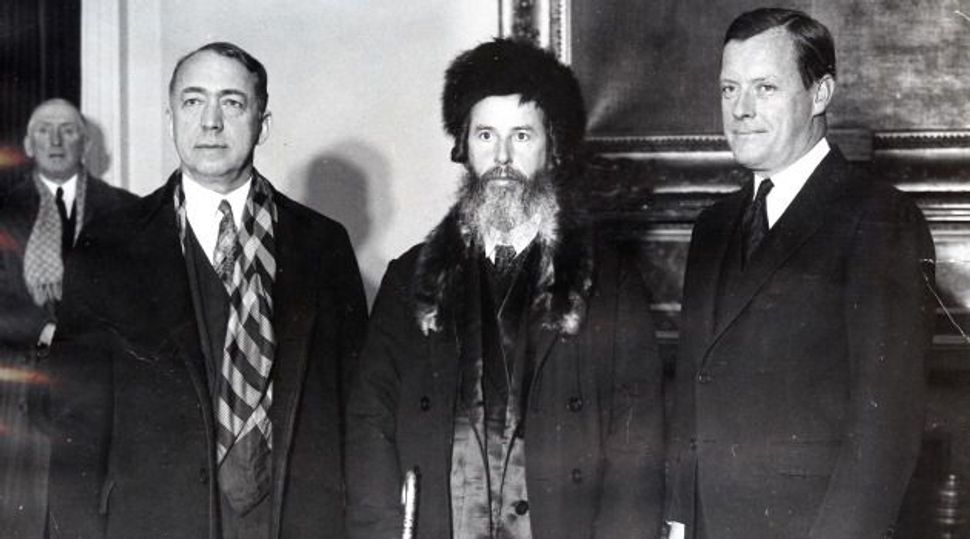 Thirty-year-old Rebecca Edelman, a resident of the new Jewish town of Boro Park, in Brooklyn, was in Manhattan and needed to take a Third Avenue tram. As she entered the car, she went to throw a dime into the change box. She missed, and the dime fell into the floor grate. Since a tram ride costs only 5 cents, Edelman asked the conductor for her change, a nickel. Having seen her miss the box, the conductor told her that because she didn’t actually pay, she couldn’t get back her change. Incensed, Edelman grabbed the conductor’s blue cap, slipped it into the folds of her skirt and jumped off the tram. The conductor gave chase and, in fact, caught her. He demanded his cap back, but she refused. He had Edelman arrested, and although she wasn’t charged, the judge gave her a good chewing-out, warning her not to steal conductors’ caps.

Roosevelt Is the Jewish Pope

“The Jewish Pope Roosevelt,” is how the Nazi newspaper Essener Nationalzeitung is referring to President Franklin D. Roosevelt. The paper, which is controlled by German Field Marshal Hermann Goering, gave Roosevelt the “Jewish Pope” appellation because of the fact that the Jewish youth organization Young Israel dedicated a Torah to him in recognition of his leadership, humanitarianism and defense of human rights. The same paper headlined an article about the sale of 600 airplanes to France as “The Dark Machinations of the American President.” Another Nazi newspaper, Das Schwarze Korps, took Roosevelt to task for his anti-Nazi stand, making the claim that the United States was in cahoots with the Soviet secret services to wreak terror in Puerto Rico.

In a Tel Aviv courtroom, Hirsch Barenblat, the conductor of the Israel National Opera, was found guilty on charges of collaborating with the Nazis. According to testimony, Barenblat, who was head of the Jewish police in Bendzin, Poland, during the war, turned over Jews to the Nazis for execution. Barenblat arrived in Israel in 1958. When a former Bendzin Ghetto resident recognized him while he was conducting an opera, Barenblat was arrested. The court determined that he was charged in 1942 with making sure that Jews selected for the death camps did not escape or sneak in with the group selected to live. By participating in this activity, Barenblat was responsible for helping the Nazis. Last August he was cleared of the charges.