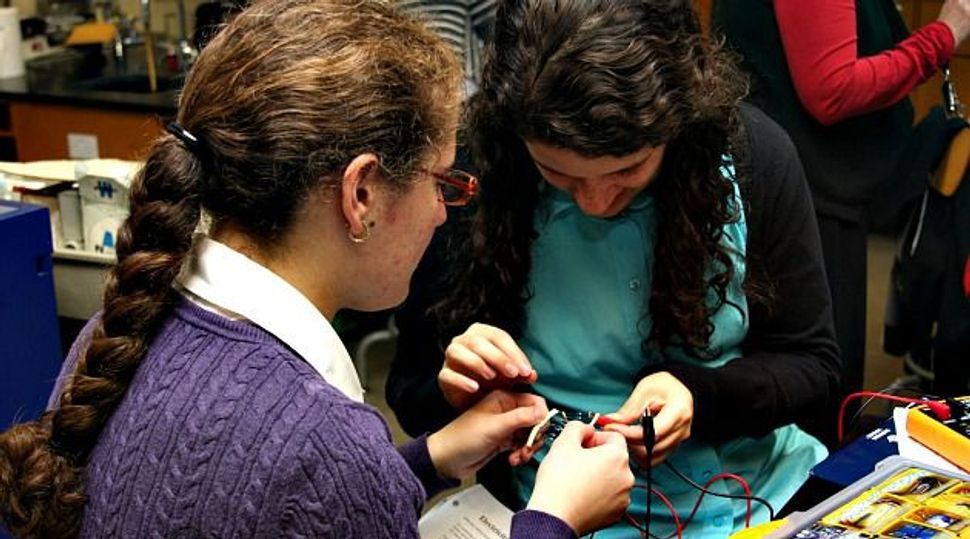 The classrooms that Adam Jerozolim visits each week don’t have neat rows of desks and chairs. There are no teachers standing at the front.

Instead, he said, they each “look like a mad scientist’s lab”: computer chips everywhere; a mass of light bulbs, Legos and circuit boards strewn about. The students are huddled around tables, staring into laptops, as they discuss their latest creations. The teachers move around, coaching them and answering questions.

They are all participating in a new program run by the Center for Initiatives in Jewish Education, designed to adapt Israel’s highly successful model of high school engineering education to Jewish schools in the United States. While President Obama and others have decried the slippage of American students in the areas of science, technology, engineering and math — STEM for short — it is rare to find a full-fledged engineering classroom outside higher education.

Begun in 2011, the two-year program currently operates in 27 schools, in areas ranging from California to North Carolina. Jerozolim, a professional engineer who once designed hydraulic systems for nuclear submarines, serves as a mentor to teachers in 12 schools in the New York City area that participate in the program.

“We’re definitely ahead of the curve,” he told the Forward in a telephone interview. “We’re a full-fledged, 100% STEM integration.”

The approach is practically unheard of in the United States, where advanced placement courses in STEM are just beginning at the high school level. Engineering — the “E” part of the acronym — often gets short shrift.

Discussing engineering, a 2009 report by the National Academy of Engineering and the National Research Council said that “few people even think of it as a K–12 subject.” The report called engineering “almost invisible” in schools. That is changing slowly. The College Board is exploring an advanced placement engineering course; also, pre-collegiate engineering programs, like Project Lead the Way’s Pathway to Engineering and Engineering is Elementary, have grown in recent years.

The advantage of the CIJE-Tech Engineering and Bio-medical Technology program is that it builds on one of Israel’s most successful educational experiments. CIJE’s program is adapted and licensed from the Israel Sci-Tech Schools Network, also known as ORT Israel. Founded in 1949, shortly after Israel’s founding, Sci-Tech is the largest nongovernmental school system in the country, enrolling one out of every 10 high school students and producing the largest number of practical engineers in Israel.

The CIJE program contains scant traditional front-of-the room teaching. Instead, classes revolve around solving practical problems that students work on in teams. As such, the program reflects a growing movement in education to reflect a world where the knowledge that teachers and textbooks once transmitted is now instantly accessible by smartphone.

“I don’t think I teach anymore, so much as coach,” said Danny Aviv, a teacher at the Solomon Schechter School of Westchester, in Hartsdale, N.Y. “I teach rudimentary concepts in programming, electronics and physics, and then say to students, ‘Let’s think of an idea and do it.’”

Students in his classroom, which he likens to the “downtown loft of a high-tech startup,” compete in teams to address practical problems. Early in the first year, for example, teams vie to see which bridge made of paper and tape can withstand the most weight. By the end of the year, that vision culminates in a sophisticated capstone project. With a budget of $100 each, projects have included a walking stick for the blind that senses obstacles ahead, and a rubber duck that monitors bath water temperature to keep it safe for small children.

Along the way, teachers have noted an interesting trend: Book-smart students often struggle in the program, while many of those who drift in more traditional courses thrive.

“Students who don’t do well in the American educational system, who don’t like to sit down and read a book, do great in our classes,” Jerozolim said. “It’s about creativity and problem-solving. Kids who can’t sit down and listen to history for an hour can do this for five hours.”

The approach appeals to parents as well. Some schools tout the engineering program as a key selling point in their recruitment efforts. CIJE officials say they are having a hard time keeping up with demand.

At the Tarbut V’Torah Community Day School, in Irvine, Calif., 42 of an eligible 90 students applied for the STEM program this year, allowing officials to be very selective. In the end, 32 students were chosen for this year’s pilot. Each student had to take a critical thinking test as part of the application process.

The approach speaks to Idit Ferder, whose daughter, Romi, hopes to become a neurologist. Romi started CIJE-Tech at Tarbut this year.

A native of Israel, Ferder recognized some of the values she associates with her own schooling. “It’s about thinking outside the box, making sure you face obstacles on your own and trying to figure stuff out without being spoon-fed the answer,” she said. “That’s exactly the way you handle yourself, day to day, when you have a job. You have a problem. You need to work with other people. You need to find a solution.”

But such programs are expensive, and this is one reason that engineering has been slow to catch on at the K–12 levels in the United States. They require up-to-date materials, as well as training for teachers who seldom took engineering courses in college. That is the reason for the mentor program. Teachers also receive intense training in New York and are invited to Israel to observe the original Sci-Tech program and affiliated industry contacts.

While acknowledging that the program has “taken off unbelievably,” Judy Lebovits, CIJE’s director and vice president, said the organization is looking for additional funding to keep up with demand. Recently, when officials from a school in Toronto expressed interest in joining the program, Lebovits told them they couldn’t afford to add new schools this year. “People keep wanting to go into the program, and we can’t pay for it,” she said.

For Aviv, whose degrees are in biology, genetics and Jewish education, the unexpected foray into engineering has re-energized his career. A teacher in one of the first seven schools to offer the program, he now leads five courses in engineering at Solomon Schechter. He likes teaching students to think for themselves and, in the process, he is carving out a unique niche for Jewish education in the United States.

“The best thing that CIJE-Tech is bringing to our schools is that it is giving the Jewish day schools something distinct,” Aviv said. “In Westchester, we’re competing with a lot of really good academic institutions. It gives us something which — for now, at least — is unique to us.”

Andrew Brownstein is an education journalist working in the Washington, D.C., area. Contact him at brownstein@forward.com