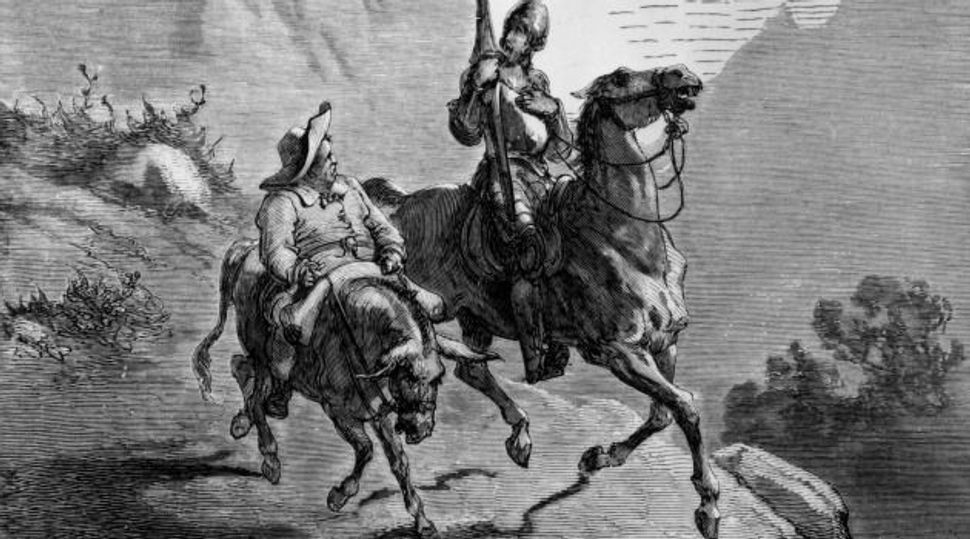 Impossible Dreamers: The adventures of Don Quixote and Sancho Panza seem to have been influenced by stories in the Zohar. Image by Getty Images

Was Don Quixote’s impossible dream a Yiddisher one? The French author Dominique Aubier, whose study “Don Quixote: Prophet of Israel” has just been reprinted, apparently thinks so.

Aubier’s book, which originally appeared in 1966, is based on the thesis now generally accepted by literary historians that the author of “Don Quixote,” Miguel de Cervantes, likely hailed from a family of conversos, or converts, Spanish Jews who in 1492 were faced with the choice of leaving their homeland or staying on as Christians. Extrapolating from this likelihood, Aubier advanced controversial theories, for example that “Don Quixote” contains numerous references to the Kabbalah and other Jewish themes. The protagonist’s very name, according to Aubier, is derived from the Aramaic word qeshot, meaning truth or certainty, often used in the Zohar, a key text in Kabbalah.

Critics of Aubier’s ideas are plentiful among Spanish literature experts (the Cervantes scholar Daniel Eisenberg has termed her book “highly misleading”), who point out that it is near impossible that Cervantes could have had access to Jewish mystical literature in Spain. When “Don Quixote” was originally published, from 1605 to 1610, observant Jews had long since been expelled from the country. Among Aubier’s other suggestions is one concerning Dulcinea del Toboso, Don Quixote’s ideal woman who was in reality a peasant-like “brawny girl,” as Quixote’s servant Sancho Panza described her. Aubier states that Dulcinea symbolizes the Shekhinah, which in talmudic tradition has been described as representing feminine attributes of God’s presence. “Don Quixote: Prophet of Israel” also offers an etymology for Dulcinea’s town El Toboso as deriving from the Hebrew words tov and sod, or good and hidden meaning.

Aubier reads “Don Quixote” as an intentional gloss on the Zohar, claiming that if readers accept that Cervantes “proceeds from a dynamic engagement with the concepts of the Zohar, themselves resulting from a dialectic dependence on Talmudic concepts, which in turn sprang from an active engagement with the text of Moses’ book, it is then on the totality of Hebrew thought — in all its uniqueness, its unity of spirit, its inner faithfulness to principles clarified by slow and prodigious exegesis — that the attentive reader of ‘Don Quixote’ must rely in order at last to be free to release Cervantes’ meaning from the profound symbols with which it is encoded.”

Aubier’s fervent, elevated tone is also present on more recent Kabbalah-inspired video analyses posted on YouTube. In one of these, Aubier, a sturdy elderly Frenchwoman who speaks in a pronounced Provençal accent, describes what the numbers on the New York street address of the then-accused felon Dominique Strauss-Kahn signify in Kabbalah lore. Aubier was born Marie-Louise Labiste in 1922 and adopted her present name after joining the French Resistance in Grenoble. (In 1945, Aubier published a collection of stories based on her Resistance experiences that would probably also make intriguing reading today.) Aubier admits to being neither a Hebraist nor a professional scholar of Kabbalah. Yet some Cervantes specialists are taking her arguments about “Don Quixote” increasingly seriously.

“Don Quixote and Sancho Panza Were Walking on the Way,” a 2009 article by Nathan Wolski in Shofar: An Interdisciplinary Journal of Jewish Studies, denies that Cervantes had intended to hide kabbalistic references in “Quixote.” Wolski concedes that both “Quixote,” about a wandering knight, and the 13th century Sefer ha-Zohar (Book of Splendor), published in Spain by Moses de León, are picaresque in that they consist of discussions sparked by events encountered on journeys. Wolski notes: “In the Zohar itself, the Kabbalists are often portrayed as knights of Torah and knights of the Shekhinah, and the Zohar frequently employs medieval military imagery to depict its wandering heroes… The Torah is compared to a beautiful maiden or princess hidden deep within her palace, while the Kabbalist is described as her lover passing by her gate constantly.”

Most of the stories in the Zohar begin by stating that two rabbis were “walking on the way.” Wolski describes the Zohar as a “proto-mystical novel recounting the adventures and expositions of Rabbi Shimon and his disciples, the Companions… For both the Zohar and Don Quixote then, walking and speaking are concurrent and constitutive activities of the journey… [T]hese correspondences derive from a shared Spanish-Jewish-converso literary legacy spanning more than three centuries.”

“Is There a Hidden Jewish Meaning in Don Quixote?” in Cervantes: Bulletin of the Cervantes Society of America also explored the works’ shared thematics as pioneered by Aubier. The article, written by Michael McGaha, argues that Cervantes intended to depict Don Quixote as a converso, although Aubier did not establish how Cervantes might have acquired any knowledge of the Zohar. Aubier’s theses have received scant wholehearted support in academia, one exception being Ruth Reichelberg, a professor at Bar Ilan University and author of “Don Quixote, or the Novel About a Concealed Jew.”

Still, Jewish readers need no convincing of Don Quixote’s inherent Yiddishkeit, especially with regard to the modern Hebrew translation by the poet Chaim Nachman Bialik (1873-1934). Working from an abridged Russian translation of Cervantes’ masterpiece — Bialik could not read Spanish — he cut the novel by over one-half. In a letter to a friend, Bialik stated: “I read [“Don Quixote”] in Russian when I first came to Odessa as a teenage yeshiva boy, trying to become a poet. I was living in poverty in Odessa, and the book had enthralled me… Dostoyevsky made me weep and Cervantes made me laugh. I alternated between laughing and crying.”

The novelist Vladimir Nabokov termed “Don Quixote” a “cruel and crude old book,” an observation justified by a readily available online summary of the novel’s action: “Don Quixote promises to make a balsam to cure Sancho… Don Quixote mixes ingredients and drinks the potion. He vomits immediately and passes out… Sancho also takes the potion, and although it makes him tremendously ill, he does not vomit… Don Quixote rushes into the battle and kills seven sheep before two shepherds throw stones at him and knock out several of his teeth… Don Quixote takes more of the balsam, and as Sancho comes close to see how badly his master’s teeth have been injured, Don Quixote vomits on him. Nauseous, Sancho then vomits on Don Quixote.”

Yet in appetizing English-language versions by the acclaimed Jewish translators J. M. Cohen, Burton Raffel and Edith Grossman, “Don Quixote” is no stomach turner. The literature-obsessed knight of doleful countenance was a man of the book, simultaneously a schlemiel and schlemazel, who seems destined to remain irresistible to Jewish readers. Even Nabokov, in his “Lectures on Don Quixote,” admitted that by the novel’s end, “we do not laugh at [Don Quixote] any longer. His blazon is pity, his banner is beauty. He stands for everything that is gentle, forlorn, pure, unselfish and gallant.”