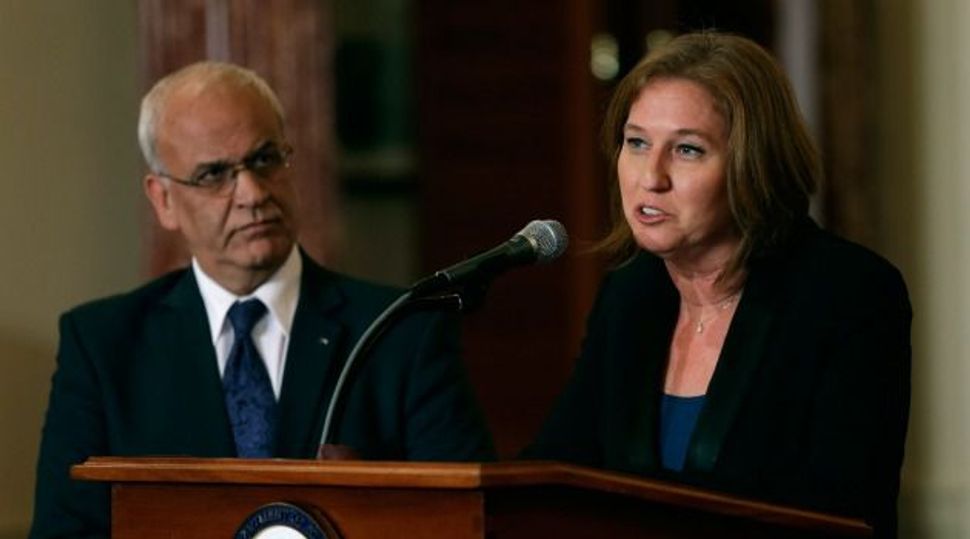 Israeli peace negotiator Tzipi Livni and her Palestinian counterpart, Saeb Erekat, had an emotional exchange the other day at a meeting of the 47th annual Munich Security Conference. It started when Livni used the traditional Jewish terms “Judea” and “Samaria” to refer to the area known to Palestinians and most of the world as “the West Bank.” Erekat, who was born in the West Bank city of Jericho, accused Livni of verbally expropriating Palestinian land for Jewish history, and Livni replied that this is “not about historical representation. Those areas in the West Bank which we call Judea and Samaria are part of our history, and we will not be able to convince you of that, just as you will not be able to convince us of your historical narrative.” To which Erekat angrily shot back: “You are talking about historical narratives? Yes, it is [about that]. I am the son of Jericho. Last year I celebrated my city’s 10,000th birthday. I am proud to be a descendant of the Canaanites who lived in Jericho 5,550 years before Joshua burned it, and I will not alter my history.”

It may seem picayune to point out that, although archaeologists and historians do believe that the earliest settlement at Jericho dates to nearly 10,000 years ago, Joshua, if he existed at all, lived more than 8,500, not 5,500, years later — let alone to note that no one knows who, ethnically, the inhabitants of early Jericho were or what Saeb Erekat’s biological relationship to them might be. After all, what’s 3,000 years here or there when we are talking about historical narratives?

But that’s precisely the point. Once upon a time, it was generally accepted that there were historical facts and there were stories, and that another word for a story was a narrative. Today, however, the word “narrative” has taken on a new meaning. This might be defined as “Someone’s version of the facts that mustn’t be challenged, because everyone is entitled to a version of his own.”

Saeb Erekat thinks he’s a descendant of the Canaanites? (Historically speaking, he’s just as likely to descend from Bedouin tribes from Transjordan or the Arabian Desert that settled in the Jordan Valley not that long ago — or, for that matter, from the Jewish community that was still living in Jericho as late as in the seventh century C.E.) It’s his opinion that Joshua razed Jericho several millennia before there were any Israelites? At least he and Tzipi Livni agree on one thing: That’s his “narrative” and he has a right to it.

How relatively new this meaning of “narrative” is can be seen from the fact that it’s not in print dictionaries. Even on the Internet, you’ll have trouble finding it. The closest I managed to come was in the online Oxford Dictionary, whose fourth definition of “narrative” is “a representation of a particular situation or process in such a way as to reflect or conform to an overarching set of aims or values,” backed by the example “[The] Labour [Party] needs to find a new narrative.” But although this is indeed a common and also fairly new meaning of “narrative,” it doesn’t quite reflect Saeb Erekat’s use of it — which is more like that of Krista Ratcliffe, a professor of English at Marquette University, who writes in a blog about something in her field: “That’s my narrative [of it] and I hold it dear. When [Indiana University professor of English] Chris Farris dared to suggest to me over the phone that perhaps my narrative didn’t really exist for everyone… I replied rather defensively, ‘Well, it exists for me.’”

Such a use of “narrative” derives, I think, from two sources. One is “narrative therapy,” a school of psychotherapy, initially developed in the 1970s and ’80s, that views personal identity as a construct shaped by the stories, conscious and unconscious, that we tell ourselves; as it has gained in popularity, so have expressions like “That’s my narrative” in the sense of “That’s how I see it” or “That’s who I am.” The other source is the whole cultural enterprise of postmodernism, with its emphasis on the subjective nature of perception and the meaninglessness of all concepts of objective truth. I have my “narrative,” you have yours — let’s not argue about what’s true.

But while some arguments cannot determine the truth, others can. Among these are arguments about the likely dates of Jericho’s several destructions at the hands of conquerors (none of which seems to overlap the period of Joshua), and about the various strands, if not exact proportions, of the different populations that compose today’s Palestinians and Jews. Perhaps Tzipi Livni was merely being diplomatic when she declined to try convincing Saeb Erekat that his “narrative” was flawed. One would like to think so. The conventional Zionist “narrative” is surely flawed in places, too, but if it cannot be factually defended as approximating the truth more than do its anti-Zionist contenders, Israel will have a hard time maintaining its determination and morale in the face of all the onslaughts on it.