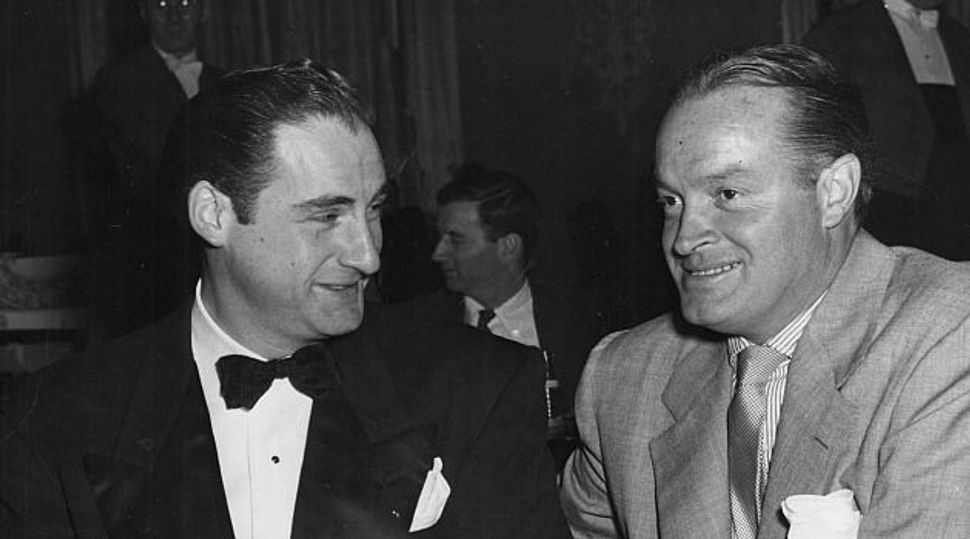 Sid and Bob: Sid Caesar shares a joke with Bob Hope in 1960. Image by getty images

Sid Caesar, who has died at the age of 91, was more than just a pioneer of TV comedy. As his memoirs “Where Have I Been: An Autobiography” (Crown Publishers, 1982) and “Caesar’s Hours: My Life in Comedy, With Love and Laughter” (PublicAffairs, 2003) recount, his achievement was a blend of second generation immigrant Jewish experience, jazz music, and repercussions of the Holocaust.

He was born Isaac Sidney Caesar in 1922 to Ida Raphael, born in Russia, and Max Caesar, from Poland, who ran a 24-hour luncheonette in Yonkers. According to family lore, their name Caesar was given to his father by an immigration official at Ellis Island. Early exposure to the linguistic Babel of the immigrant experience at the luncheonette made Caesar able to mimic foreign sounds for comic effect. In a working class family with two older brothers, Caesar grew up lacking a strong sense of individuality or self-worth, a typical background for a clown.

His friend and colleague Carl Reiner told an interviewer for the Archive of American Television in 1997 that as a child, Caesar’s nickname in the family was the Yiddish term for “piece of crap” : “[Caesar] wasn’t handled right as a kid by his parents and his brothers… He told me this once: ‘My middle name was shtick drek.’” Reiner went on to explain that Caesar was “the youngest and he didn’t get a lot of attention and so he didn’t develop those social skills that most people have, but he could act the social skills.”

Caesar found an early identity as a big band tenor sax player. In his beginnings as a comedian, a wild bebop energy infused his performances, and like many jazz players, his artistry was fueled by a longtime addiction to alcohol and pills. As a musician-comedian, sound effects became Caesar’s specialty, whether noisy planes or incomprehensible foreign languages.

Like an instrumentalist creating amusingly original vocal riffs in the tradition of Louis Armstrong Caesar added physical force and passionate intensity, with the stage presence of a young Marlon Brando. Other Jewish comedians of the era with parallel routines such as Jules Munshin paled in comparison to Caesar’s sheer visceral impact. Few comedians could hold the stage with Caesar, among them being the strapping and hyper-energetic Reiner.

Despite his landmark star status on TV, Caesar’s talents were essentially those of a stage performer, with a rage fueled by early family conflict, amplified by service in World War II. Although he was sheltered from combat in the Coast Guard, Caesar experienced the Holocaust like all American Jews, and only a few years after the war ended in 1945, he was repeatedly ridiculing Germans on TV, with characters prefiguring Mel Brooks’ “The Producers” and Brooks’ 1980s remake of Ernst Lubitsch’s “To Be or Not to Be.”

On his early “Your Show of Shows” (1950–1954) and later shows, Caesar surrounded himself with all-Jewish writing teams who were personally experienced in the traumas of modern Jewish history. Caesar’s head writer on “Your Show of Shows” was Mel Tolkin (1913–2007), born Shmuel Tolchinsky in a shtetl near Odessa,Ukraine, where he experienced anti-Semitic pogroms. Later analyzing this persecution which drove his family to North America, Tolkin described it as creating a “condition where humor becomes anger made acceptable with a joke.”

Among other rage-filled writers for Caesar was his friend Mel Brooks, recovering from World War II combat experiences, and the more introverted choler of Larry Gelbart, Neil Simon, and others. Contrary to legend, a young Woody Allen only wrote for Caesar 1950s TV specials, but never for the main series “Your Show of Shows” or “Caesar’s Hour.” The interactions of all these verbally gifted Jews with chips on their shoulders was as inspiring as the product they created, and Reiner offered a version of the experience in his classic 1960s TV sitcom “The Dick Van Dyke Show,” with Reiner himself playing the role of vainglorious star, modeled after Caesar.

Caesar’s writers’ room likewise inspired the 1982 comedy film “My Favorite Year” produced by Brooks, and Neil Simon’s Broadway play “Laughter on the 23rd Floor” (1993). These legendary echoes of Caesar have proven lasting, despite a flood of recent DVD releases celebrating his real-life comedy..

Discussing his sources, Caesar told “The Jewish Chronicle” in 2010: “There’s a lot of fun that you can bring out in being Jewish. But I didn’t want to make fun of being Jewish. There’s a fine line…I used to see people davening in shul and they’d snap the book shut when they’d finished. Like they’d won a race. Then look around to see if anyone else had finished. I used to find that very funny…Jews appreciate humor because in their life it’s not too funny. We’ve been trodden down for a long time, thousands of years. So we’ve had to turn that around because if you take it all too seriously you’re going to eat yourself. And we’re very good at being self-deprecating. Either we do it or somebody’s going to do it for us. We might as well do it first.”

Caesar’s demons drove him off television, but his genius made him an irreplaceable, unforgettable talent.