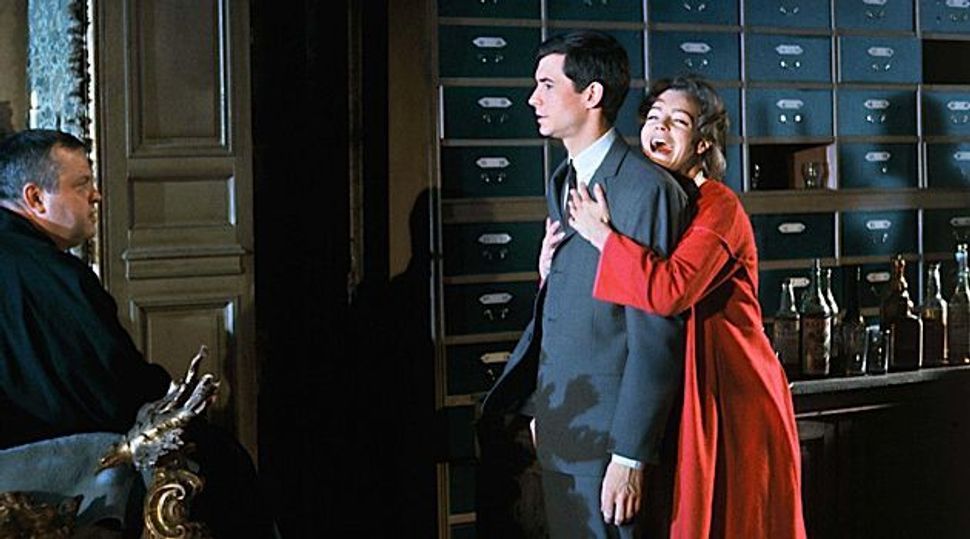 Kafkaesque Performance: Anthony Perkins on the set of ?The Trial? with Jeanne Moreau and director Orson Welles. Image by AP Photo

Observers of the convergence of Jewish and mainstream American culture will be keeping a close watch on this year’s Academy Awards in which — for the first time in movie history as far as the Forward can tell — the two leading contenders for the Best Actor award are non-Jewish actors playing Jewish characters.

In “American Hustle,” Christian Bale gives an uncharacteristically sympathetic performance as Irving Rosenfeld, a schlumpy con artist who looks as if he might have been drawn by Dave Berg in a 1970s issue of Mad Magazine. Meanwhile, in “The Wolf of Wall Street,” Leonardo DiCaprio plays what seems to be an amped-up version of, well, Leonardo DiCaprio, even if he happens to be named Jordan Belfort. For our money, DiCaprio’s is the more entertaining performance, while Bale provides the more impressive feat of acting.

Either way, this has led us to try to compile a brief and thoroughly subjective list of the best gentile actors in Jewish roles. There is, of course, a problem with definitions. What defines “Jewish,” for example?

And, while we’re on the subject, what do we mean by “best”? If we take it to mean most memorable and iconic, then we’d have to include, say, Charlton Heston as Moses. If we take “best” to mean an actually good display of acting, we’d have to lop Mr. Heston off our list.

We’ve also left off some fairly obvious contenders like, say, Sir Ben Kingsley in “Schindler’s List” — which strikes us as a fine and competent performance but not among the actor’s most memorable. We briefly considered Joe Mantegna’s turn as a detective in David Mamet’s “Homicide,” a film we liked when it first came out but one we imagine hasn’t aged very well. So, with apologies for our difficulties with definitions and our inherent prejudices, we present, in chronological order, our Top 11 Non-Jewish Actors in Jewish Roles.

1. Charlie Chaplin as the Jewish Barber in “The Great Dictator” (1940)
One of the greatest films of all time in which Chaplin plays both a version of his signature Little Tramp character and the Tomainian dictator Adenoid Hynkel. Chaplin blends comedy and pathos with — in the film’s final speech — a needed glimmer of hope. For the record, we’re discounting unproven rumors about Chaplin’s possible Jewish heritage.

2. Anthony Perkins as Josef K. in “The Trial” (1962)
Perkins’s signature herky-jerky, nervous shtick had a hit-or-miss quality to it. He will be forever etched into moviegoers’ minds as the archetypal creep in “Psycho.” But he is remembered less fondly — if at all — for his impersonation of troubled ballplayer Jimmy Piersall in “Fear Strikes Out.” To our mind, his starring role as Franz Kafka’s persecuted hero in Orson Welles’s classic represents the pinnacle of his career.

3. Dominique Sanda as Micòl Finzi-Contini in “The Garden of the Finzi-Continis” (1970)
Vittorio De Sica’s classic is, to our minds, one of the most beautifully made and understated films about the Holocaust. It is anchored by a slew of terrific performances, most notably Sanda’s.

4. Louis de Funès as Victor Pivert in “The Mad Adventures of Rabbi Jacob” (1973)
Well, he wasn’t playing a Jew as much as he was playing a bigot pretending to be a rabbi. Even so, the improbable international success of this insane caper was largely due to de Funès’s manic performance in the title role.

5. Graham Chapman as Brian Cohen in “Life of Brian” (1979)
Brian Cohen may not have made for a convincing savior, but Chapman’s understated turn as “the man who wouldn’t be Christ” elevated this Monty Python film to classic status. Clearly, the front-runner as chosen by the Judean People’s Front and the People’s Front of Judea.

6. Roberto Benigni as Guido Orefice in “Life is Beautiful” (1997)
A morally dubious and saccharine misappropriation of the Holocaust? Well, maybe, even though the story did have roots in Benigni’s family story. Still, Benigni’s portrayal of a Jewish bookstore owner is a comic tour de force. And even if it wasn’t, we’d still include it for the Italian actor-director’s walk to the stage to collect the Best Actor statuette during the Academy Awards, which ranks among the most entertaining moments in Oscar history.

7. Thora Birch as Enid Coleslaw in “Ghost World” (2001)
Scarlett Johansson may have been the actress who became a star after Terry Zwigoff’s adaptation of Daniel Clowes’s graphic novel. But Birch’s endearingly dour take on Coleslaw (whose name is an anagram for Daniel Clowes) made this one of the best comedies of the early 21st century. Oh, and for the purposes of our discussion, we’re going to include this one despite the reports that one of Birch’s grandparents was apparently Jewish.

8. Cate Blanchett as Bob Dylan in “I’m Not There” (2007)
Apart from the terrific soundtrack, Todd Haynes’s meditation on the Bob Dylan myth seems more film school exercise than full-fledged film. Nevertheless, the performance Blanchett turns in as the Bard during his “Like a Rolling Stone” period marks the one segment where the film goes electric.

9. Tom Cruise as Les Grossman in “Tropic Thunder” (2008)
The rumor is that Harvey Weinstein was the inspiration for Cruise’s turn as a bald, bearded, loud-mouthed Hollywood producer who suggests a maniacal version of Christian Bale’s performance in “American Hustle.” Either way, this is one of Cruise’s most engaging comic roles, and even if much of the movie wasn’t totally worth the price of admission, the Les Grossman dance sequence certainly was.

10. Barbara Sukowa as Hannah Arendt in “Hannah Arendt” (2012) and Rosa Luxemburg in “Rosa Luxemburg” (1986)
As one of the leading voices of New German Cinema, director Margarethe von Trotta has distinguished herself as one of the great interpreters of German history and culture. And, her collaborations with Barbara Sukowa seem every bit as significant to us as the one between, say, Martin Scorsese and Robert DeNiro.

11. Ben Cross as Harold Abrahams in “Chariots of Fire” (1981), and Anjelica Huston as Tamara Broder in “Enemies: A Love Story” (1989)
Leaving some names off this list was easy — John Turturro as Moe Flatbush in “Mo’ Better Blues” comes to mind. But there were too many to keep this as a simple 10. Score the last one as a tie.