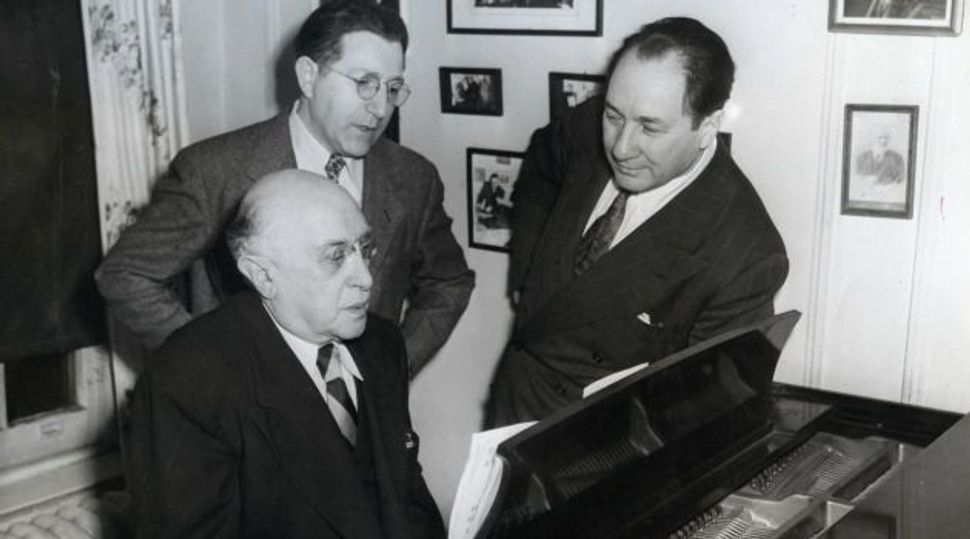 Rehearsals: Tuning up for the Festival of Jewish Arts held at Carnegie Hall, composer and pianist Jacob Weinberg with conductor Isidor Freed (back), and basso Sidor Belarsky (right). Image by Louis Sperling/Forward Association

After only eight months in the country, 17-year-old immigrant Arthur Goldman was sentenced to a stint in jail after being arrested as a pimp. His unfortunate story has more to do with his aunt, Fanny Bailik, who lived with Goldman in a tenement on Norfolk Street in Lower Manhattan. Bailik was apparently in charge, and she arranged for Minnie Bressler, a cook at a nearby restaurant, to use their apartment to service customers. Whenever one of these customers showed up, Bailik would send Goldman to the restaurant to fetch Bressler, who would do her business and then go back to cooking. When a pair of local detectives noticed how Bressler shuttled back and forth between the restaurant and the tenement, they went to inquire. Bailik asked if they were interested in Bressler. In fact, they were. The detectives arrested all three of them. Bressler and Goldman wound up in jail. Bailik, inexplicably, was set free.

British Plan To Give Up Palestine

It is being reported from London that the British have formulated a strategy to allow the creation of a state governed by Arabs, which would guarantee national minority rights to Jewish citizens. They are planning a conference that would include both Arabs and Jews and create the constitution of a new state. In the interim, a government comprising five Arab and two Jewish delegates would administer the country under the auspices of the British Colonial Ministry. Also, Jewish immigration to Palestine would be cut sharply so that the Jews can remain a minority in Palestine. Additionally, purchases of land by Jews will be positively curtailed in certain areas.

Famed American playwright Arthur Miller, who has been attending the trial of Nazis who served at the Auschwitz concentration camp, said that the Nazi episode is the central event of our time. “That which took place at Auschwitz touches on fundamental human relations, whether they be Nazis and Jews, whites and blacks, French and Algerians, or Russians and Hungarians. The problem is death, guilt, the responsibility of humanity for its behavior.” Miller added that he hopes that Germany and the rest of the world can solve the Nazi problem not by burying it, not by forgetting, but by putting it on trial, like the one taking place in Germany right now. It will, however, take generations of living in peace.