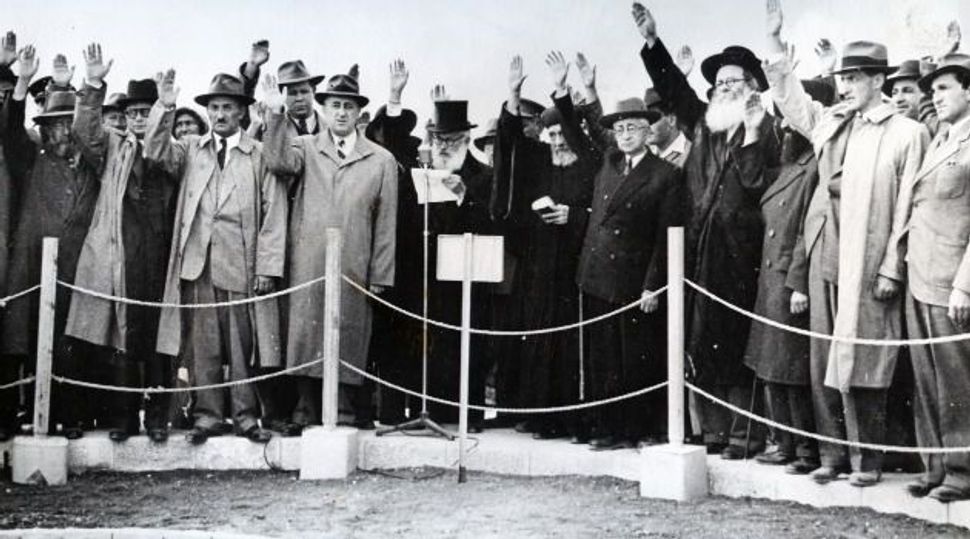 Rabbinical Protest: A group of prominent Jerusalem Jewish rabbis and political leaders took an oath in front of Theodor Herzl?s tomb to protest the internationalisation of Jerusalem. Image by Forward Association

A second witness in the Leo Frank case in Atlanta has come forward to say that prosecutors swayed him to provide false testimony during the trial that led to Frank’s conviction. A 15-year-old paper boy, George Epps, now contends that he was coached to testify that, on a vacation day, he rode in a car with the victim, Mary Phagan, to the pencil factory where she worked. Under oath, George testified that he asked Mary if she was going to the factory to meet her lover, since it was not a workday. He claimed she responded that she was going to pick up her paycheck, and that she confided her distaste for the superintendent, Leo Frank, who, she said, winked at her and always waited for her by the door after work. According to George, prosecutors invented the testimony in order to convict Frank. Just a few days ago, Helen Ferguson, who had also testified against Frank, said the same thing about the prosecutors.

The Nazi government has published a decree announcing that Jews who had previously been fired from their workplaces will now be conscripted for forced labor. How this will be arranged was not explained. What is clear is that under the rule of the Nazis, German workers have been turned into slaves. The government appears to be saying that Jews can work for their country until they emigrate. But it is hardly believable that the Nazis have suddenly decided to pity the Jews, making sure they find some way to serve the Hitler regime. The Jews’ response to the new decree is fear. They know very well that forced labor under Nazi contractors will be worse than slavery, as it was for Jews in Egypt. The Nazi authorities also refuted a claim that 100 Jews leave Germany each day. Ironically, the Nazis use every method available, legal and not, to drive the Jews out of their country.

A wave of panic has overtaken Syrian Jewry after the murder by an Arab fanatic of a 17-year-old Jewish boy in broad daylight in the middle of Damascus. The boy’s brother was seriously wounded while attempting to help him. This assault is yet another in a number of anti-Jewish attacks that have taken place recently in Syria. The two brothers, Yitzhak and Yosef Basani, were on their way home from synagogue when a well-known fanatic stabbed them near the entrance of the Jewish Quarter. Many Damascus Jews know the murderer, as do the police, for his frequent threats against Jews. The police, however, did nothing to curb his excesses. Yosef Basani’s funeral was transformed into a Jewish demonstration the likes of which has not been seen in Damascus: Hundreds of Jews followed the procession to the cemetery, where they laid flowers on the grave. Damascus police attempted to stop the demonstration, but they were foiled.