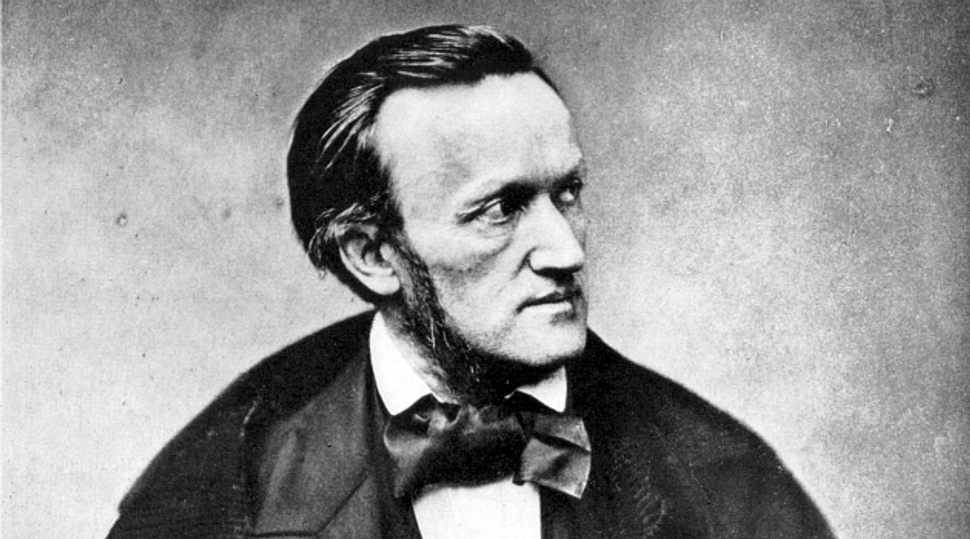 Austria or Bust: The exhibit shows how Jewish Wagnerism existed in Vienna until the Third Reich. Image by Getty Images

There’s an episode of “Curb Your Enthusiasm” in which Larry David is caught whistling Wagner’s “Siegfried Idyll” to his wife in front of a movie theater. A hysterical and unhinged nudnik accosts him, spouting the common litany of charges against Wagner (“history’s biggest anti-Semite,” “millions of Jews marched to the gas chambers with Wagner’s music playing”). While clearly satirical in intent, the “Curb” moment does illustrate the polarizing effect of Wagner’s music on Jewish listeners (and non-listeners).

Perhaps the best-known example of this is in Israel, where musicians uphold a boycott on performances of the composer’s music despite some recent attempts to break it. (It will be interesting to see how Israel marks Richard Strauss’s 150th birthday later this year. Although a less public anti-Semite than Wagner, Strauss had uncomfortably close relations to the Third Reich, both lending his cultural prestige to the Third Reich and profiting from its patronage.)

While it is well known that there are many Jewish Wagnerians — including two of today’s leading Wagner interpreters, James Levine and Daniel Barenboim — one might not be aware of just how far back the Jewish fascination with Wagner’s music and, at times, even his ideology, goes. The role played by Jews in the establishment and furthering of the Wagner cult in late 19th and early 20th century Vienna is the topic of a “Euphoria and Unease: Jewish Vienna and Richard Wagner,” on view at the Vienna Jewish Museum until March 16.

As curated by Andrea Winklber, the exhibit deals with many of Wagner’s well-known Jewish enthusiasts, including Gustav Mahler and Theodor Herzl (both avid Wagnerians) as well as figures less remembered today, like Victor Adler, founder of the Social Democratic Workers’ Party. While Wagner was being harnessed by right-wing ideologues, Adler read socialist messages into Wagner’s operas, in which he found an outpouring of sympathy for the proletariat.

As one of the most musically important German-speaking cities in Europe, Vienna quickly became one of the foremost centers of Wagner adulation. The Wagner Societies that sprung up in the city as early as 1871 (in other words, during the composer’s own lifetime) had numerous Jewish members and patrons.

Figures like composer Karl Goldmark, poet Siegfried Lipiner, and industrialist Friedrich Eckstein would meet at a vegetarian restaurant (in deference to the composer’s dietary preferences) to discuss the Master. Eckstein even made a pilgrimage on foot to Bayreuth for the 1882 premiere of “Parsifal,” Wagner’s final and arguably most ideologically suspect opera.

“I wanted people to discover how many Jewish Wagnerians there were in Vienna and the types of contradictions this entailed for being a Jewish Wagnerian. Everyone was aware [even back then] of the fact that Wagner was a nasty anti-Semite. And despite this, I find it astounding when you look at so many composers and artists who built their own work on his foundation,” Winkelbauer said.

Mahler’s appointment as director of the Vienna Court Opera in 1897 ushered in a new age of Wagner productions. For the first time, Wagner’s operas were performed there uncut. He also brought the Secessionist artist Alfred Roller onboard to furnish startlingly modern designs.

The museum displays the composer-conductor’s heavily marked full score of “Tristan,” one of the most impressive objects on display. (In a particularly satisfying irony, Adolf Hitler, an avid Wagnerian who credited the city with making him a confirmed anti-Semite, saw his first “Tristan,” in the legendary Roller production, conducted by Mahler.)

Herzl had his eureka moment during a performance of “Tannhäuser” and dashed home afterwards to start writing “Der Judenstaat.” What exactly the link was in Herzl’s excitable mind between the medieval minnesinger and the necessity of a Jewish home in Palestine is anyone’s guess. For whatever reason, the portrait of a closed community of artist-statesmen in this early, less nationalistic Wagner opera, fired Herzl’s vision.

A more disturbing case was the self-loathing Otto Weininger, whose twisted gender theories as outlined in the tome “Sex and Character” were fashionable throughout fin-de-siècle Europe. Arguing that the Jews were inherently weak and effeminate people, he famously wrote, “The most manly Jew is more feminine than the least manly Aryan.” Himself Jewish, he committed suicide in 1903, an act that seems, at least in part, to have been inspired by seeing “Parsifal” at Bayreuth.

By placing Herzl and Weininger side-by-side, the exhibit argues that very different Jews in Vienna drew from Wagner’s “operas, writing and status as a political artist, both inspiration and justification for their actions,” to quote from an exhibition sign.

Wisely, the exhibit does not attempt to divine the origins of Wagner’s vociferous anti-Semitism. That said, the composers Giacomo Meyerbeer and Felix Mendelssohn do get a well-merited mention as the two main targets of Wagner’s racist tract, “Judaism in Music.” There’s also information about the innovations in synagogue music instigated by cantors Salomon Sulzer in Vienna and Louis Lewandowski in Berlin, well-known figures who Wagner would have had in mind when writing the essay. Additionally, ample space is given to two Viennese journalists who inspired Wagner’s ire. The first, and better known of these is the music critic Eduard Hanslick, who objected to Wagner’s Gesamtkunstwerk aspiration, which he considered fundamentally opposed to music’s pure form. Wagner returned the favor by using the Jewish critic as his model for the buffoonish character of Sixtus Beckmesser in “Die Meistersinger von Nürnberg,” his only comedy. The second was Daniel Spitzer, a satirist and feature writer who humiliated the composer by publishing letters to his seamstress that contained absurdly precise instructions about luxurious fabrics, colors and textures. The letters were so popular that Spitzer continued running them even after Wagner was forced to flee Vienna (incidentally, disguised as a woman) because of his mounting debts.

The exhibit shows how Jewish Wagnerism existed in Vienna up until the Third Reich. We learn about many of the Jewish singers and conductors active in the 1920s and 1930s. The best known of these are Bruno Walter and bass-baritone Friedrich Schorr, the Wotan of choice at Bayreuth between 1925 and 1931. Also featured are Wagner enthusiasts like the theater director Emil Geyer (who was shot in 1942 at Mauthausen), modern architect Josef Frank and the musicologist Guido Adler. Stella Junker-Weissenberg’s flapper-era sketches for Wagner costumes are the most fascinating artifacts of this era. And there’s a telling postcard by avant-garde photographer Dora Horovitz, writing to Vienna in 1940 to lament how she misses Bayreuth from her exile in San Jose.

In the final section of the exhibit, video monitors play excerpts from opera productions, movies and TV shows (including the aforementioned “Curb” one), and documentaries, including Stephen Fry’s “Wagner & Me” and Hilan Warshaw’s recent “Wagner’s Jews.” Adorning the walls are well-chosen quotes from various figures weighing in on the debate. Alongside the famous Woody Allen quip, “I can’t listen to that much Wagner. I start getting the urge to conquer Poland,” there is a serious reflection by Max Brod, who refused to read Wagner’s racist tracts so as not to “tarnish my pure impression of an exemplary artistic revelation.”

Ultimately, “Euphoria and Unease” establishes that the discussion of how to deal with Wagner’s anti-Semitism — and its consequences — is by no means over. Alongside recent critical scholarship and unorthodox methods of staging Wagner’s operas, “Euphoria and Unease” furthers this iconoclastic approach to Wagner, by examining those Jews who put their belief in a great artist and sworn enemy, and by revealing the contractions and, at times, self-denial that this entailed. There is as little to be gained by turning Wagner into a bogeyman as by holding him up as the be-all-and-end-all of high culture. “We didn’t want to make a tribute to Wagner. If the exhibit is at all a tribute,” said Winklbauer, “then it’s a tribute to all those who used Wagner to help create their own culture.”

A.J. Goldmann is a freelance writer based in Berlin. He is a frequent contributor to the Forward.