Our Month With the Lemba, Zimbabwe’s Jewish Tribe 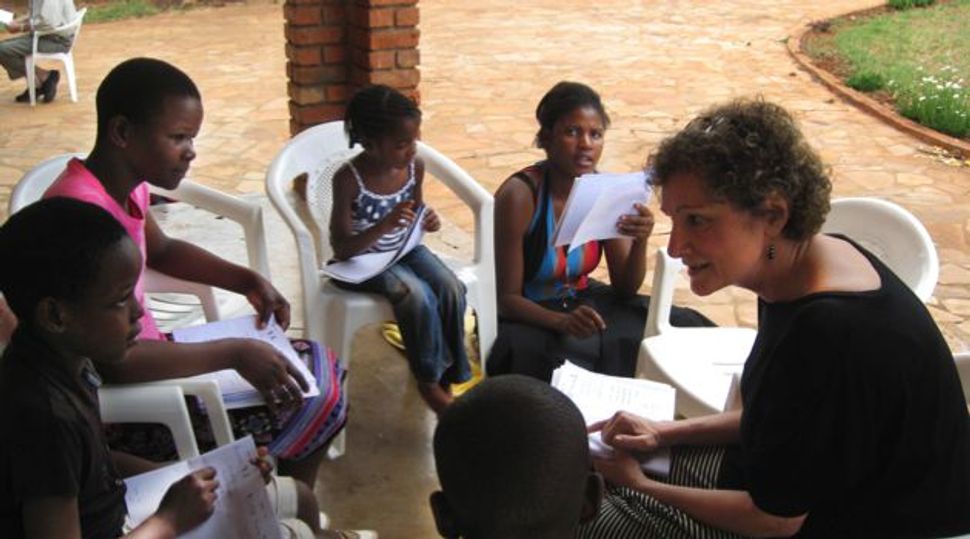 A Teaching Moment: Elaine Berg meets with Lemba children in Harare, Zimbabwe. Image by Courtesy of Irwin and Elaine Berg

Zimbabwe is not a popular tourist destination for Americans Jews, or Americans at all. But in October of last year, we — a retired lawyer and a retired health care executive from New York City — went there to meet with an emerging Jewish community with ancient roots, the Lemba.

Modreck Maeresera, one of the leaders of the Lemba, had invited us to Zimbabwe to spend a month with him and his tribe. He is a 38-year-old Lemba, who was formally converted to Judaism by a beit din on a month-long trip to the United States, during which we first met him.

Our trip, and Maeresera’s to the United States, were both facilitated by Kulanu, a not-for-profit organization dedicated to supporting isolated and emerging Jewish communities around the world. We have been active members of Kulanu almost since its inception in the early 1990s, and have traveled to Uganda, Mali, Ethiopia, China and South America with it.

We had known about the Lemba, having read Tudor Parfitt’s book, “Journey to the Vanished City: The Search for a Lost Tribe of Israel.” Both the oral history and the customs of the Lemba make clear their Jewish origins, though only some Lemba consider themselves Jewish.

Saturday is their day of rest, sexual relations between men and women are forbidden during the woman’s menstrual period, they observe most Jewish dietary laws, the manner in which they slaughter and drain animals shows a familiarity with kosher rules, and they believe in an abstract and singular God. They also circumcise their male children at age 8, a symbolic gesture toward the eight-day Jewish circumcision rule.

Tribal tradition holds that the Lemba people, who are now scattered across Zimbabwe and South Africa and number in the tens of thousands, originated in the Holy Land and came to Africa via Yemen. The original group was made up of just seven or eight male traders, who eventually married African women. In an article published in The American Journal of Human Genetics in 1996, geneticist Trefor Jenkins showed that 50 percent of the Lemba Y chromosomes were Semitic in origin. He also proved the veracity of the Lemba legend that their founding group consisted of seven or eight men.

Further DNA testing confirmed Jenkins’s results. DNA tests of Jewish Cohanim, or descendants of the Israelite priestly class, show that over 50 percent have a specific marker known as the Cohen Modal Haplotype. The tests showed that Cohanim who carried the CMH were descended from a single common male who lived about 3,000 years ago in the Middle East. (This would coincide with the time that Solomon built the First Temple.)

According to Lemba tradition, a male named Buba was the founder of the Buba priestly clan. CMH was found in more than 50 percent of the Buba clan. It appears that Buba was a Cohen.

We found a great deal of enthusiasm on the part of those we met — mainly Maeresera’s contacts in the community — for learning about “traditional” Judaism. In addition to the formal lessons, we spent many hours just talking about ideas, customs, and history. This is clearly a group that is embracing a new future with sincerity and commitment.

They told us they saw our presence as a message from the world Jewish community that they were being accepted as Jews. They also demonstrated great pride in being Lemba and a desire to preserve as many of their own traditions as possible.

Of course, we learned from the Lemba, too. Living with Maeresera and his extended family of eight — including three children under the age of four — in housing provided by Kulanu in Harare, we shared meals of rice, potatoes, eggs, or the national dish, a polenta-like paste called sadza. The four women of the household were busy with chores all day. Since water was not readily available, just washing dishes and handwashing clothing required a huge effort, including filling and moving large vats of water collected when water was available, and then heating them over a gas stove.

Our greatest surprise was that Harare, once a wealthy and sophisticated city, suffered from a lack of municipal services. Water and electricity were available sporadically, the streets were full of potholes, and the streetlights only worked in midtown and near the airport. The United States dollar has been Zimbabwe’s official currency since 2009. However, there is almost no coinage in the country, so when you shop, change is often given in candy, gum or pens.

The Lemba live in a Christian society. The schools they attend, especially the better schools run by churches, and even those supported by the state, teach Christianity. Many Lemba have converted to Christianity even while retaining some of their particular traditions such as circumcision and kosher eating practices. “Messianic” protestant missionaries have now targeted those Lemba who have not yet converted.

Our students — we taught about 15 people during our time in Zimbabwe — expressed concern that the current generation is not keeping the beliefs and traditions of the Lemba as strictly as prior generations. This is a result of the economic conditions in the country, the migration from traditional villages to cities, and the globalizing force of Internet, media, and exposure to other values that affects populations around the world.

This tendency to stray has been noted by the elders who have been struggling to find ways to combat it. Some believe that in order to survive, the Lemba must rejoin the world Jewish community.

In Zimbabwe, the “traditional” Jewish community knows of the Lemba, but for many reasons (some of them halachic) it has not accepted them.

These white European Jews came to the country prior to the 1930s for economic reasons, and some as survivors of the Holocaust. They found success as farmers, business people and factory owners. The mid-1960s saw the demographic pinnacle of Jewish life in Zimbabwe (then Rhodesia), with over 7,000 Jews in the country. A rich Jewish life developed there, with Ashkenazi and Sephardi communities living in harmony. Today, largely as a result of the violent land reform in the 1990s, there are fewer than 300 Jews in Harare, the capital, about 50 in Bulawayo, the second largest city, and virtually none elsewhere in the country. In Harare, there continues to be separate Ashkenazi and Sephardi synagogues, but the communities have merged. They conduct services together, alternating synagogues, yet despite this are barely able to scratch up a minyan for Shabbat.

Two-thirds of the Harare Jews are older than 65 — their children have left for the United Kingdom, Israel, the United States and Australia. The last bar mitzvah is said to have taken place in 2006. Their once flourishing Hebrew school now educates a vast majority of non-Jewish children.

As far as we know, there had been no communication between the Lemba and the local Jewish community until our visit, when we brought Maeresera to Shabbat services in the Sephardic synagogue in Harare. Irwin and Maeresera sat in the second row in the synagogue — Elaine sat separately with the women — and the group of 12 worshippers welcomed Maeresera. We understand that a member of the synagogue is helping Maeresera continue his Hebrew lessons.

We believe that just as the Lemba will benefit from a closer association with the global Jewish community, so too will their inclusion enrich the Jewish world at large. Beyond a desire to foster inclusivity and welcome those who embrace a Jewish identity, there is a practical reason that we should invite them. We are 13 million people in a world of six billion. The Lemba are a welcome addition.

However, there are considerable but not insurmountable problems in welcoming the Lemba. Many Lemba, particularly those we met and taught, now consider themselves Jews and refer to themselves as Jews. Many find the idea that they must convert before they are accepted as Jews insulting. There is considerable discussion among them over whether they should accept conversion.

It has been an enormous privilege and honor for us to be on the cusp of the resurfacing of this ancient but emerging group of Jews, who we hope will play an important role in the future of our people.

Our Month With the Lemba, Zimbabwe’s Jewish Tribe