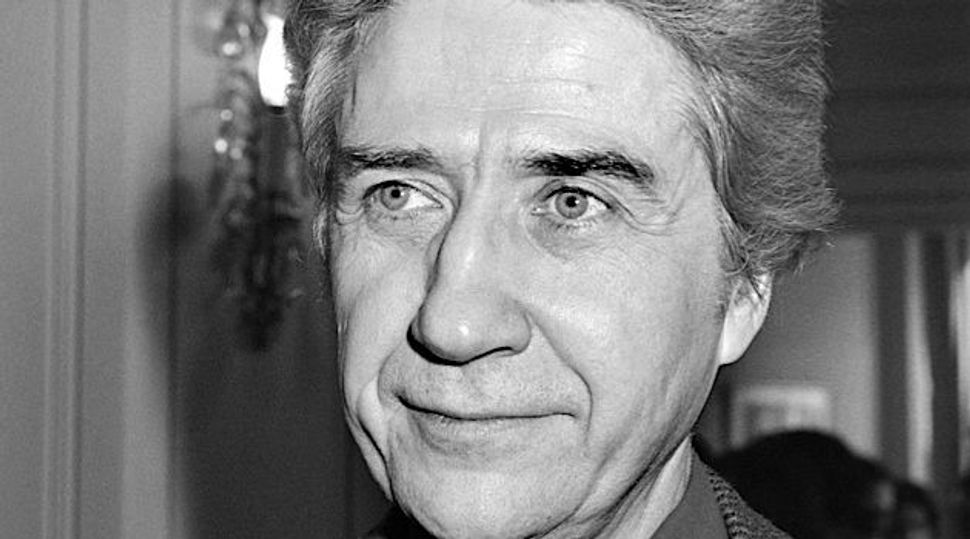 Paris Belongs to Us: The director Alain Resnais as seen in 1977. Image by Getty Images

The French film director Alain Resnais, who died on March 1 at age 91, had a complex relationship with Jews. For many years, his 1955 film “Night and Fog” was shown in classrooms as an approach to understanding the horrors of Nazi concentration camps. Yet Resnais’s aims were both more and less than this purpose, and had surprisingly little to do with Jews per se.

Son of a Catholic pharmacist, Resnais was born in 1922 in Vannes, in western France. He spent the war years studying film editing at the Institute for Advanced Cinematographic Studies (L’Institut des hautes études cinématographiques) founded in 1943 under the auspices of the Vichy collaborationist government. Resnais was repelled by the German occupation of his homeland; one of his early short films, “Guernica” (1950) shows images by Pablo Picasso which prefigure his celebrated monumental anti-Fascist painting “Guernica.” Resnais always rejected the “auteur” theory of cinema, in which a director is purportedly a sole creator of a film, preferring to work with a team of creators, mixing poetry, music, recitation, and other arts. This was true of “Guernica” and many other later films, including “Night and Fog.”

Asked by one interviewer whether he had not innovated this use of still images and other media in documentaries, Resnais demurred, pointing out that he had worked as an assistant on “Paris 1900,” a 1947 French documentary directed by Nicole Vedrès, who had used a similar approach. Resnais felt that concentration camps must be alluded to symbolically, rather than literally, onscreen. In a 2012 interview, André Heinrich, Resnais’ assistant on “Night and Fog,” recalled the director’s extreme reluctance to make a film on concentration camps, since he was neither Jewish nor a deportee for political reasons. When the non-Jewish poet Jean Cayrol (1911–2005), whose activity in the French Resistance resulted in his being deported to the Mauthausen-Gusen concentration camp in 1942, agreed to write the film’s narration, then Resnais finally agreed. Critics have justifiably objected that Cayrol’s narration confuses concentration camps and extermination camps, and abstains from discussing the Holocaust as a specifically Jewish tragedy. Indeed, the word “Jew” is only pronounced once in the 32 minute film, during a list of murdered victims: “Stern, a Jewish student from Amsterdam.”

Possibly more objectionable today is the aestheticizing tendency of the film, understandable from a director whose previous works largely consisted of short films about artists. Still, Paul Celan agreed to translate the narration for the German version of “Night and Fog,” and the French government, under pressure from postwar Germany, tried to prevent the film from premiering at the Cannes Film Festival, suggesting that in 1955, even metaphorical, aesthetic evocations of concentration camps disconcerted many.

As Resnais’s art developed, he seemed to embrace the murkiness of human fallibility, especially in Marguerite Duras’ cloudy screenplay for “Hiroshima mon Amour” (1959) in which a French actress (Emmanuelle Riva) confesses that her love affair with a Nazi soldier in Occupied France resulted in her head being shaven as punishment by her compatriots after the Allied victory. Wartime experience remained an essential subject for Resnais after his 1969 marriage to Florence Malraux, the daughter of the French Jewish author Clara Malraux (born Clara Goldschmidt; 1897-1982), the only offspring of her ill-fated marriage with writer André Malraux.

Although Resnais’s marriage to Florence Malraux would likewise ended in divorce, he also formed artistic alliances which kept anti-Fascism as a key theme in his filmmaking. One such was Jorge Semprún (1923–2011), a Spanish author and Resistant as well as survivor of Buchenwald. Semprun would write the screenplays for Resnais’s films “The War Is Over” (1966), about left-wing opponents of the Spanish dictator Francisco Franco, and “Stavisky” (1974) in which Jean-Paul Belmondo played a glamorized version of the 1930s Polish Jewish swindler Alexandre Stavisky, whose crooked dealings inspired much anti-Semitic commentary in prewar Europe.

In Resnais’ later films, even when the subject matter was not specifically Jewish, an aura of wartime struggles against Fascism remained as a context. In “Mélo” (1986), a highly theatrical tragic love story was adapted from a 1929 play by the French Jewish author Henri Bernstein (1876-1953). If less villainous than Stavisky, Bernstein’s life offered a morally mixed message. In 1911, when Bernstein’s play “After Me” was performed at the Comédie-Française, the French fascist association Action française protested that a Jewish author, and one who had deserted military service – as Bernstein had – did not deserve such a production. Bernstein spent the war in luxurious exile at New York’s Waldorf-Astoria, from which he penned a biting essay about Marshal Pétain, head of the collaborationist Vichy government. Bernstein also shocked one visitor, the actor Jean-Pierre Aumont, by his ostentatiously swanky lifestyle at a time of hardship for his homeland, and by how little he appeared to be concerned by the war in Europe.

One of Resnais’s later projects closest to his heart was also one of the least successful critically: “I Want to Go Home” (1989), with screenplay by the American Jewish cartoonist Jules Feiffer, about a comic strip artist, played by American Jewish screenwriter and lyricist Adolph Green, on a trip abroad. Himself a devotee of comic strips, from which he claimed to have learned the basics of cinema vocabulary, Resnais enthusiastically embraced Feiffer’s tetchy, kvetchy imaginings. Happier altogether was a 1992 TV documentary about George Gershwin, again featuring Adolph Green, in which the American Jewish composer’s fatal brain tumor inspired some unexpectedly arty film effects. Sympathizing with imperfect Jews onscreen despite their varying flaws, from Stavisky and Bernstein to Feiffer, Resnais retained a refreshingly nonjudgmental attitude. Apparently there was one exception to this tolerant attitude: the Austrian-born Jewish author and translator Frédéric de Towarnicki (1920-2008), a specialist in the philosophy of Martin Heidegger who spent a decade during the 1960s toiling on a never-to-be-filmed screenplay for Resnais. The project collapsed in acrimony and the former colleagues were not on speaking terms for the remainder of their long lives. The case of Towarnicki – whose screenplay was finally published in 2007 — apart, Resnais displayed intermittent, but admirably steady, inspiration from Jewish themes and protagonists.