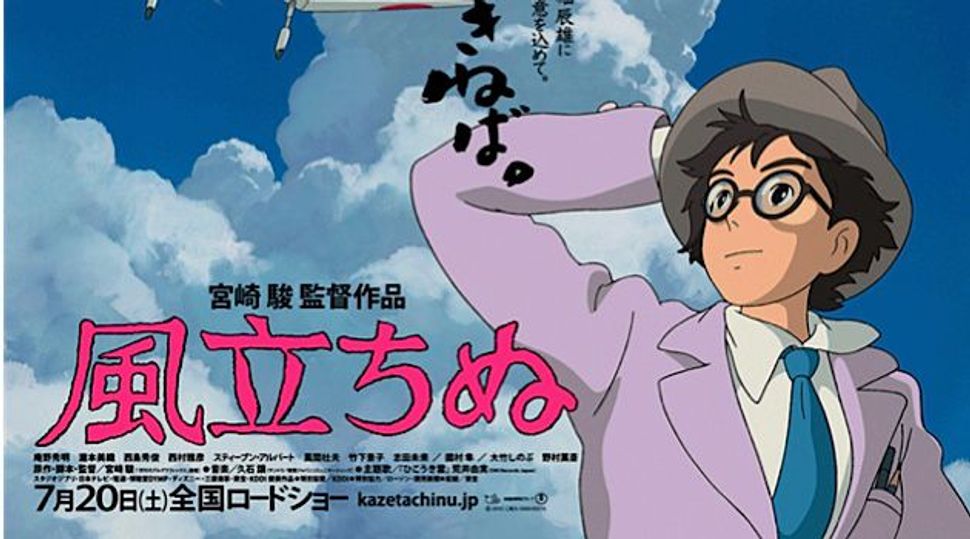 A Mighty Wind: Japanese filmmaker Hayao Miyazaki says his latest film ?The Wind Rises? will be his last. Image by Studio Ghibli

There is much that is unusual about Hayao Miyazaki’s latest film, which the master says will be his last. It takes place in our own world, not the mythical past of “Princess Mononoke” or the magical universe of “Spirited Away.” It has a mostly adult, male protagonist, unlike those in many of Miyazaki’s other movies. And it has attracted its share of controversy.

But there is much that is familiar as well: visuals so stunning one’s mouth literally drops open, a complexity of characters who are impossible to fully condemn or applaud, and the sense, upon leaving the theater, that Miyazaki is one of the great storytellers of our time.

This new film, “The Wind Rises,” is a counterpart to almost all of Miyazaki’s oeuvre. Where his overriding themes include the importance of nature and innocence, “The Wind Rises” is about the loss of both. If this were any other Miyazaki film, its hero, Jiro, would have been the villain. It is a story of an artist — but one whose moral blindness is at once understandable and indefensible.

Jiro is based on the real-life aeronautical engineer Jiro Horikoshi, who invented the Japanese Zero fighter, which played a significant and deadly role in World War II. But as depicted by Miyazaki, he is not a warmonger but a dreamer: Prevented from being a pilot because of his nearsightedness, he turns to engineering, and quickly becomes entranced by the beauty of design. In several sequences, we see what Jiro sees when he looks at airplanes: the harmony of the mechanisms, the play of wind, and also the flaws in the planes’ design.

As we quickly come to understand, however, Jiro’s artistry is not exercised in a vacuum. Rather, it is put to use by a militaristic enterprise, which he himself knows to be morally suspect. Yet what is he to do? He is of his time and place: He sees his country suffer from earthquakes and economic deprivation, and this is what he is called upon to do. Should he deliberately fail at his task, as Oskar Schindler’s factory was reputed to have done? He would only be replaced and ruined.

The title of the film comes from a poem by Paul Valéry: “The wind rises; we must try to live.” The wind here is literal, of course, as there are likely few narrative films with greater attentiveness to aerodynamics. But it is also figurative: It is fate that pulls Jiro into war, and that pulls him toward and then away from his beloved Nahoko.

The wind is all of history, too, which sets the stage for Jiro’s existential dilemma. What choice does he have but to do his best and pursue his artistic vision — even though he knows that ultimately, it is being co-opted for dubious ends?

I was reminded, watching Jiro debate the morality of his position, of something Ehud Barak notoriously said back in the 1990s. A reporter asked him what he would have done, had he been Palestinian. After some deliberation, the Israeli prime minister said he probably would have joined Fatah, if not Hamas. When controversy ensued, Barak doubled down. What do you think I would have done, he asked, simply become a farmer?

As with Barak’s interview, Miyazaki’s film has provoked controversy for its nuanced and complex portrayal of someone whose design, after all, was secondarily responsible for the deaths of many Chinese, American and other soldiers and civilians. There are many people who want to see life in terms of black and white, heroes and villains.

A similar controversy, in fact, has recently enveloped the German TV miniseries “Our Mothers, Our Fathers.” Like “The Wind Rises,” the German series depicts the moral complexity of being a German coming of age in the 1930s. Of course, in hindsight, it’s easy for all of us to praise the Oskar Schindlers and condemn everyone else. (Though even Spielberg’s film showed some of Schindler’s moral ambiguity.) But without the benefit of hindsight, the characters actually living out their lives may be doing the best they can, in a context that is terrible.

Much the same can be said of Claude Lanzmann’s “The Last of the Unjust,” which focuses on Judenrat member Benjamin Murmelstein, whom we might judge as a Nazi collaborator, or praise as someone who tried as best he could to save lives — or, perhaps, recognize as someone placed in an impossible position by history, who nonetheless attempted to “try to live” true to his ideals.

Jiro is not quite Murmelstein. He registers dismay at Japanese militarism, and disgust at German fascism. (The Japanese sense of cultural inferiority relative to Germany is palpable in the film, and not something I had been aware of previously.) He seems to know that the war will bring ruin to his beloved home country. But he diligently pursues his work, impelled by his artistic dream. The film neither condemns nor forgives him.

The counterpoint to Jiro’s maxim of “we must try to live” comes in the form of the German engineer Junkers. Jiro meets Junkers briefly, but later learns that he has run afoul of the government, and is likely to be killed. In real life, this is exactly what happened: Junkers refused to turn certain technology over to the Nazis, and died under house arrest.

Amid all of this moral ambiguity, perhaps the clearest ethical voice belongs to a likely Jewish refugee from Germany, nicknamed Castorp, after the hero of Thomas Mann’s “The Magic Mountain.” Jiro and Nahoko encounter Castorp at a sanatorium where Nahoko is trying to recover from tuberculosis (hence the nickname — “The Magic Mountain” is set in a sanatorium as well).

It’s not made explicit that Castorp is Jewish, but he has a stereotypically huge nose, and is the only German-speaking character who is critical of the Nazi and imperial Japanese regimes. He functions almost like a prophet. “Here we can forget Manchuria,” he says to Jiro, “forget leaving the League of Nations, forget making enemies of the world, forget the coming annihilation.” Castorp and Jiro are awake to the unfolding of history, yet powerless to stop it.

I have focused on the ethical implications of “The Wind Rises,” perhaps to the detriment of its visual beauty, gentle humor, and sense of tragedy. This may be unfair to the film; even in defending it against its critics, I risk reducing it to a moral polemic. Really, “The Wind Rises” is an aesthetic and thematic capstone to an already brilliant career. Due to the controversy, Disney has barely distributed the film at all. Catch it if you can (preferably with subtitles, rather than dubbed) before the wind rises and blows this masterpiece away.

Jay Michaelson is a contributing editor of the Forward. He is most recently the author of “Evolving Dharma.”