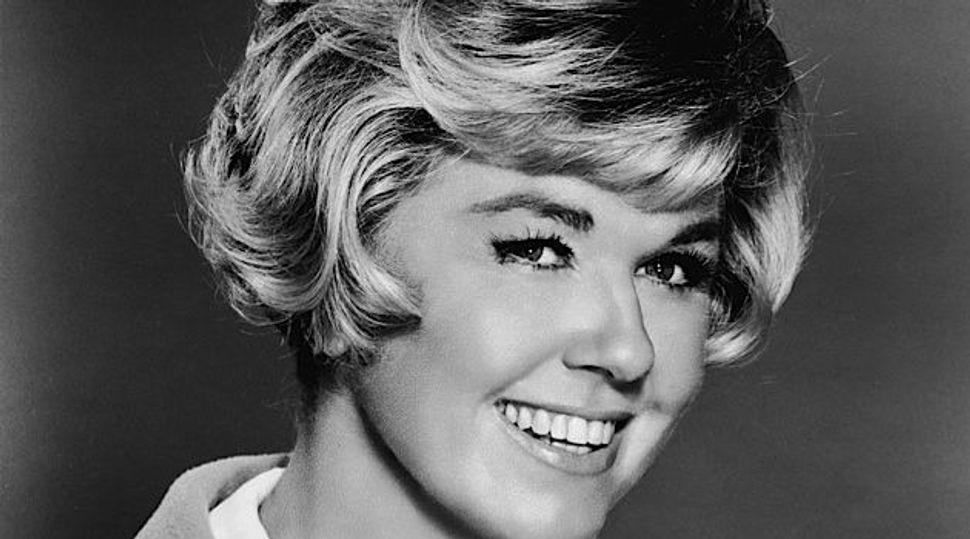 Color Her American: In the mid-1950s, formerly dark-haired American Jewish women seized the opportunity to look like Doris Day. Image by Getty Images

A few months ago, I happened across a reference to the late 19th century notion that the Jews suffered disproportionately from colorblindness. This malady, it was argued at the time, explained a lot about them, most especially their putative penchant for things bold and flashy or what we today would most likely call “bling.”

Whether true or false, popular belief in the etiology of taste set me thinking about the ways in which color is as much a symbolic property as a physical one, a form of delineation that is simultaneously cultural and material.

Attributing colorblindness to the Jews was but one of many instances throughout Jewish history in which color was deployed by the powers that be to distinguish the Jews from everyone else. Rendering them visually as well as theologically a people apart, the forcible wearing of reds and yellows also stamped the Jews as an alien other.

Consider, for instance, the popularity of “Color Me Beautiful,” a how-to manual on looking one’s best. Back in the late 1980s and early 1990s, virtually every Jewish woman I knew owned a copy — and for good reason. It took the guesswork out of getting dressed. All you needed to know was whether you were an “Autumn,” a “Winter,” a “Spring,” or a “Summer,” a category of being that came with its very own portable, color chart.

A newfangled spin on the calorie counters of yesteryear, the chart fit handily into your handbag where, when the occasion warranted, it could be easily retrieved and put to good use. Reassuring as well as accessible, the “Color Me Beautiful” color code reduced the possibility of a fashion faux pas: If you stayed well within the lines and stuck to the color palette associated with your type, success was assured.

The judicious use of color didn’t just make things right. It also made them better — and blonder. Hair coloring had been around for ages, but the practice had been associated with the demimonde, not with the girl next door. The introduction of a product known as Miss Clairol changed that association: Coloring one’s hair became as respectable as the wearing of lipstick. When this no-muss, no-fuss hair dye took the American marketplace by storm in the mid-1950s, formerly dark-haired American Jewish women seized the opportunity to look like Doris Day.

Egging them on was one of their number, the Brooklyn-born Shirley Polykoff. The daughter of immigrants from Ukraine, she was a junior copywriter at Foote, Cone & Belding when it landed the Clairol account and assigned it to her. Having lightened her locks for years, she was no stranger to the power of transformation and used that knowledge to good advantage by coming up with the slogan “Does she… or doesn’t she?” According to Malcolm Gladwell in “True Colors,” a droll and lively piece on Polykoff and other Jewish women in the advertising business, Polykoff’s winning slogan was actually midwifed by her Yiddish-speaking mother-in-law. Upon meeting Polykoff for the first time, she inquired of her son whether or not his prospective bride “painted” her hair. “Shirley Polykoff was humiliated,” Gladwell writes. “In her mind she could hear her future mother-in-law: Fahrbt zi der huer? Oder farhbt zi nisht? Does she color her hair? Or doesn’t she?”

Many advertising jingles and slogans undoubtedly grew out of the soil of domestic relations, but none had quite as powerful an impact as this one, which took the physical sting and the emotional shame out of coloring one’s hair. Later still, as Clairol continued to introduce new hair coloring products into the market, Polykoff kept pace, encouraging American women to believe that “If I’ve only one life, let me live it as a blonde!”

According to Polykoff’s daughter, whose astute observations appear in Gladwell’s piece, her mother wasn’t attempting to escape her Jewish background so much as improve her life. “She wasn’t trying to pass,” related Alix Nelson Frick. “But she believed in the dream… Her idea was that you should be whatever you want to be, including being a blonde.”

In the New World, where consumer goods were enmeshed in the gears of Americanization, the process of personal transformation verged on being “nice ’n easy.”