What George W. Bush Really Said to Jews for Jesus 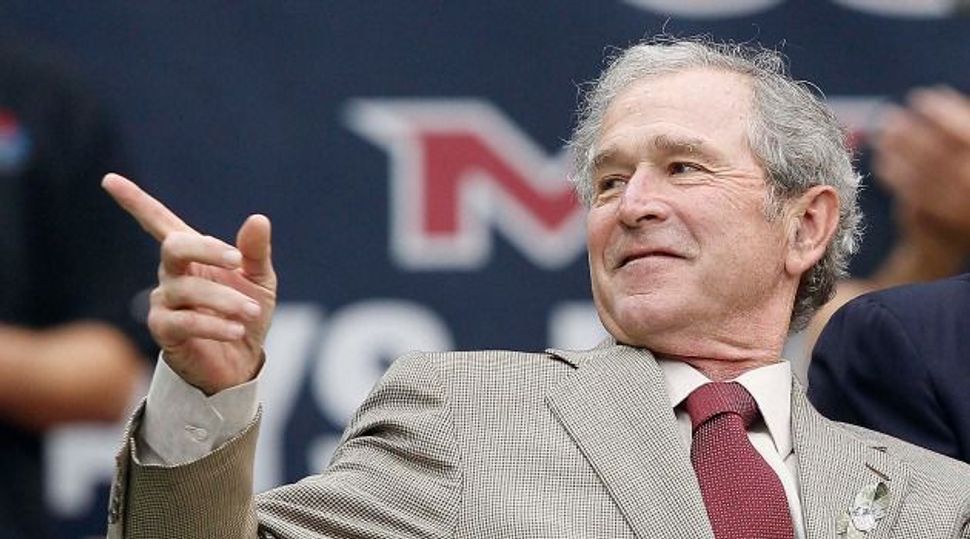 W: Sure does love his cheddar. And Jews. Image by getty images

The Messianic Jewish Bible Institute in Dallas hosted George W. Bush as the keynote speaker at its annual fundraiser on November 14, 2013. He spoke to the group’s mission of bringing “Jewish people into a personal relationship of faith with Yeshua the Messiah.” Until now the speech has been the subject of a strict embargo but, using the latest covert techniques, Backward editor Ian Fist and intrepid reporter Eli Nemic rescued the following transcript.

It’s such a pleasure to be here talking to the Jews for Cheeses. I, too, am a big fan of kosher cheddar.

What’s that? It’s Jews for Jesus? Well, okay then. Uh-huh. Okay, I see. Just a little misunderstanding is all. I love ’em both.

So you all believe in Jesus but you’re Jewish? That’s just incredible. We need more of you — I don’t know how you do it. But then I don’t know whether to believe it’s not butter or not. It’s so creamy, but then they call it I Can’t Believe It’s Not Butter.

Now my friends, since you won’t let me talk about cheese, I’d like to talk more about Jesus. You see, Jesus and I have a great deal in common: For example, both our names start with the same letter. And I’ve always identified with Jesus, because like him, I’m the Son, not the Father — that’s Herbert Walker. Dick Cheney? Well, he’s the Holy Ghost.

But it turns out Dick isn’t holy, after all. I discovered this one night while I was on my computer, thinking about Dick’s relationship to Jesus. Kids, never Google “The Gospel According to Dick.”

[General laughter, followed by descriptions of the Bush ranch in Crawford, Texas, techniques for rounding up cattle and painting in the shower.]

Now some people are worried that I’m here talking to Jews for Jesus and that I’m going to burn some political bridges, but I want to tell you now that actually, some of my best friends are Jesus.

I want you to know, I’m on your side, folks. I love the Jews, and I think more should become like you all and embrace the Lord. In that spirit I’ve been writing letters to famous Jews, encouraging them to befriend Jesus. I’d like to read you the letter I wrote to Woody Allen last night.

Here’s the letter! Dear Woody, I just loved “Midnight in Paris.” Think how much better it would be if the main character were Jesus. Or if you hadn’t married your daughter. Sincerely, George W. Bush.

Dear Joe Lieberman, Remember when you ran for vice president? You died politically and were never resurrected. Jesus was resurrected. Accept him. GWB.

Another: Dear Abe Foxman, Jesus never retired. Neither should you. Sincerely, GWB.

Talking of retirements, Philip Roth retired. He’s one of yours, and he’s a fascinating fellow. He writes all about this friend of his. See, this guy Portnoy, he’s got — well, he’s got what we would call ants in his pants, ya know what I mean? He just — just loves women, especially women who aren’t Jewish. He calls them shiksas. And he also — he has this story in the book, about how he gets so riled up, he decides to — well, I don’t want to offend you people, but he takes some liver, and what he does to it — well, he doesn’t eat it, I can tell you that. No wait, he does eat it, afterward. Now, we don’t do that in Texas. But that’s what it’s like being Jewish. And that’s why I, well, that’s why we all should help those people.

So, in the words of Sigmund Freud, I have a dream. Heh. And in that dream, all the Jews in the world will embrace if not all of our scriptures, at least our Old Testament. And to help that happen I have some good news for you. And you all’re Jews who believe in Good News! Eighteen months ago Laura and I decided to take the nuclear option. We bought JDate, and now the J stands for Jesus. So I encourage you all to go back to your communities, join JDate, join your local Jesus Christ Centers and go ahead, love a Jew and bring them to cheeses.

What George W. Bush Really Said to Jews for Jesus