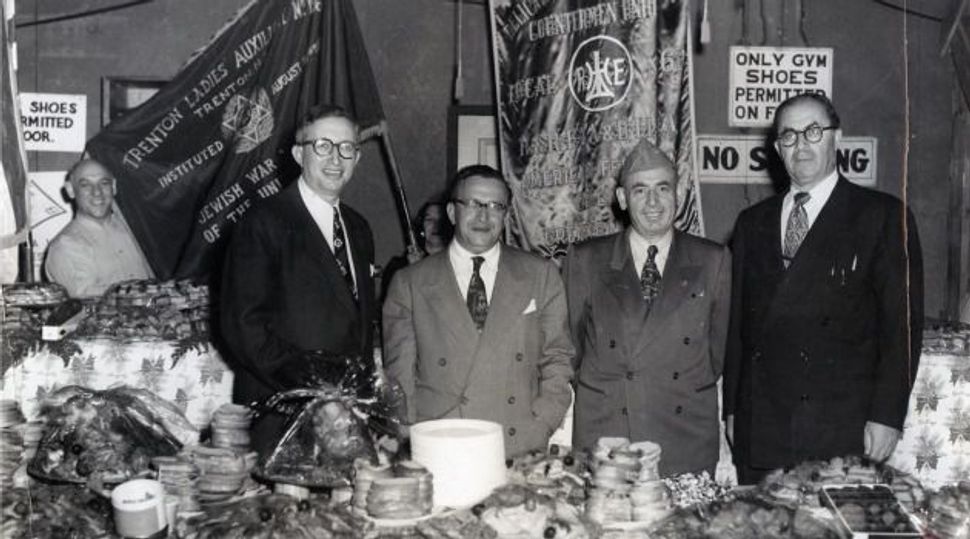 Holiday Feast: Purim celebration at Fort Dix, New Jersey, organized by the Trade Union Council and the Jewish War Veterans Organization, who supplied the food for the festivities attended by Jewish veterans and active service men and women. Image by Lou Sperling/Forward Association

Brooklyn-born Leo Frank, superintendent of a pencil factory in Atlanta, was sentenced a week ago for the murder of 13-year-old Mary Phagan, an employee of the factory. At Frank’s sentencing, the judge asked him if he had anything to say. He responded: “False stories have been spread about me. These falsehoods influenced the thoughts of a large mob of people. It was from this mob that a jury was chosen. Once they were in the courtroom, they were influenced even more by false and damaging lies. These poisonous lies crept into the brains of the jury and robbed them of their ability to judge me fairly. If the state and the law demand my life as a sacrifice for the spilled blood of the little girl, then it is left for me to die with courage. I am innocent of this crime, and it will be proved in the future. I am ready to hear your decision.” Frank stood emotionless as the judge pronounced the death sentence.

Six months ago, Italy’s fascist government decreed that any Jew who entered the country after 1919 and is less than 65 years old must leave. Last Saturday the six-month mark passed, and some 5,000 Jewish refugees were forced to leave, but they had nowhere to go. Hoping that France would accept them, most of the refugees headed toward the border. However, they are currently wandering about in the mountains between Italy and France, because French gendarmes are preventing them from entering. It is understood that some of the refugees managed to sneak over the border and are hiding in small villages. Hundreds of others were forced back into Italy, where they are being fined and threatened with prison. There are said to be many women and children among the refugees, all of whom are suffering from cold and hunger.

The Soviet newspaper Trud accused the Israeli Embassy in Moscow of disseminating anti-Soviet material through the city’s main synagogue. Specifically, the paper claimed that Avrom Agmon, first secretary of the Israeli Embassy, distributed nationalistic Zionist literature and spread false rumors about the realities of life in the Soviet Union. Trud also claimed that Agmon took anti-Soviet tracts, wrapped them in prayer shawls and left them sitting on benches for people to find. In addition, the paper printed a letter allegedly written by the synagogue’s administrator, N.M. Paler, demanding that the Israeli Embassy and its staff members cease and desist from bringing such poisonous political materials into the synagogue.