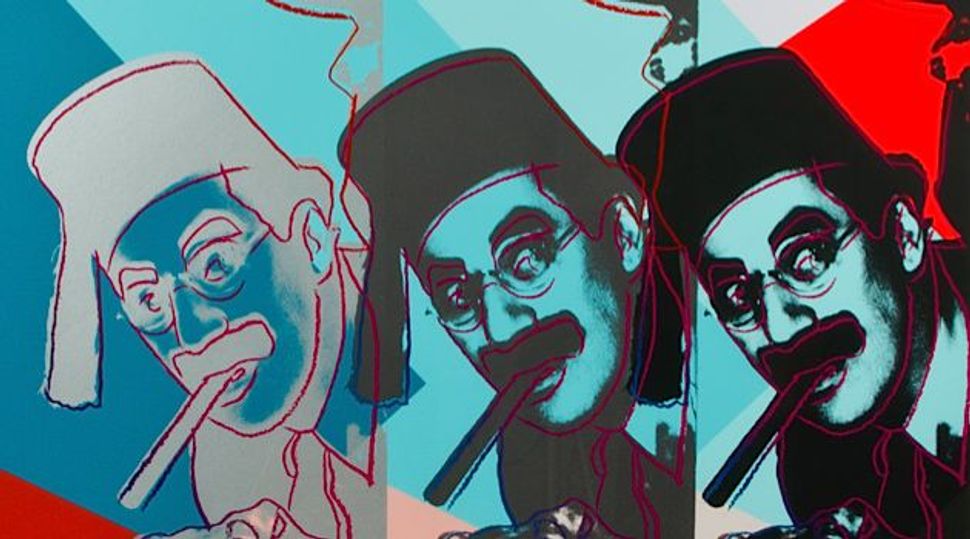 When Andy Warhol’s “10 Portraits of Jews of the Twentieth Century” was originally exhibited at the Jewish Museum in New York in 1980, it was popular with the Jewish public, but generated controversy among art critics.

Hilton Kramer and Robert Hughes accused Warhol of pandering to the synagogue circuit. Kramer wrote: “The show is vulgar. It reeks of commercialism, and its contribution to art is nil.” Thirty-four years later, these portraits are appearing at the Jewish Museum Milwaukee, which turns out to be a remarkably fitting place for this exhibit.

The museum’s permanent exhibit describes the migration of Jews from Europe to [Milwaukee]( (http://mam.org/warhol/ ‘Milwaukee’) ) starting in the early 1840s. One of these Jews, Goldie Mabowehz (Golda Meir), left Russia in 1906 with her mothers and sisters to join her father in Milwaukee. At age 14 she ran away to be with her sister in Denver, and then returned to Milwaukee for high school where she joined and became a leader of Milwaukee’s Labor Zionists. She moved to Palestine in 1921 before becoming prime minister of Israel in 1969.

On display are photos of Meir as a young girl in Milwaukee. In seeing these images from Meir’s life, I had an epiphany as to why Warhol decided to create this series, in light of the fact that he never created any similar series featuring subjects of a particular ethnicity (other than a series of black transvestites in “Ladies and Gentleman”): He saw himself — his own yearning to forge a new, spectacular, identity — in these Jews.

Much has been written asking why Warhol was drawn to creating this series of Jews. Warhol’s friend and art dealer Ron Feldman suggested the idea to him, but why did Warhol pursue it? And why did he choose to depict these Jews in particular?

Famously, Warhol quipped that he selected these particular Jews because he “liked their faces.” But there’s more to it than that. The Jews he chose came from immigrant backgrounds; all of their parents or grandparents made their living by their hands; they were butchers, carpenters, mechanics, grain merchants (except for Martin Buber, who broke with the religiosity of his grandfather, a talmudic scholar, to pursue secular studies and moved away from his homeland). Yet these 10 (or 12 if you consider the three Marx brothers included in one portrait) forged new paths by creating for themselves a rich, creative life of the mind.

Warhol himself had Roman Catholic parents who came from Czechoslovakia and grew up in working-class Pittsburgh, Pa. As Kynaston McShine writes in “Andy Warhol, A Retrospective,” “from an early age, he seems to have been interested in adopting another identity, having experienced the problems of being himself — of being linguistically, culturally and religiously different.”

In his early works, he was drawn to “metaphors of metamorphosis and self-transcendence,” portraying Superman, who transforms himself from Clark Kent, and Popeye, who becomes a new man by eating spinach. Like Warhol, these 10 Jews were able to transform themselves on a remarkable level and create their own individual paths to fame by sheer intelligence and determination, not by inheritance.

Warhol’s attraction to Meir makes the Jewish Museum Milwaukee a fitting site to exhibit his prints. Indeed, Meir’s presence hovers over the entire museum like a floating figure in a Chagall painting. When you enter the museum, you first see an enormous hanging tapestry created by Chagall in 1973. On the upper right of the tapestry are two female faces. The museum notes quote Chagall: “In painting the woman, I have thought of the women of the Bible, of Madame Golda Meir, and of all the valiant women of the earth.”

The Chagall tapestry sets up surprising resonances for the Warhol exhibit. When you enter the room where the prints are displayed, you immediately see two windows, each broken into four squares or rectangles of bright blue, red, yellow and purple. These windows evoke Chagall’s stained-glass windows. In turn, the colors of Warhol’s prints (except for the austere grays of the Einstein portrait) mirror those that Chagall uses in his stained glass windows. In Warhol’s Buber portrait, the philosopher’s face suggests Chagall’s prophet figure.

To create these prints, Warhol started with a source photograph, enlarged the print, and made a freehand line drawing onto the subject’s face. He then collaged fragments of colored paper onto the drawing and made silk screens of them. The effect is ironic because silk screens, a medium he frequently used, involve a photomechanical process that removes the artist’s touch. Roy Lichtenstein, another pop artist, left his images without the record of his hand so that they looked as if they were created by a machine. Warhol uses subtle benday dots in the shadows of these faces, one of Lichtenstein’s hallmarks, and a printing technique derived from pulp comic books of the 1950s and 1960s. With the benday dot, Warhol makes a connection between these self-transformative Jews and comic book superheroes.

However, with these portraits, we can also see Warhol’s human touch in his rendering of the curvy lines in Meir’s hair and in Buber’s beard. It’s as if Warhol couldn’t resist leaving a trace of himself in his subjects. The scribbled lines energize, rather than mechanize, these portraits. The effect of hanging these portraits in one room is the powerful feeling that these figures have been re-animated. The faces push up against the surface, creating an immediacy with the viewer. The riotous color and geometric shapes, and the solid presence of these weighty Jewish heads made me feel that these figures were somehow alive and about to engage in conversation. It’s a Last Supper of Genius Jews without the table and the food. For a moment, in that small room in the middle of Milwaukee, I felt as if I were surrounded by family.

Laura Hodes is a writer and an attorney living in Chicago.