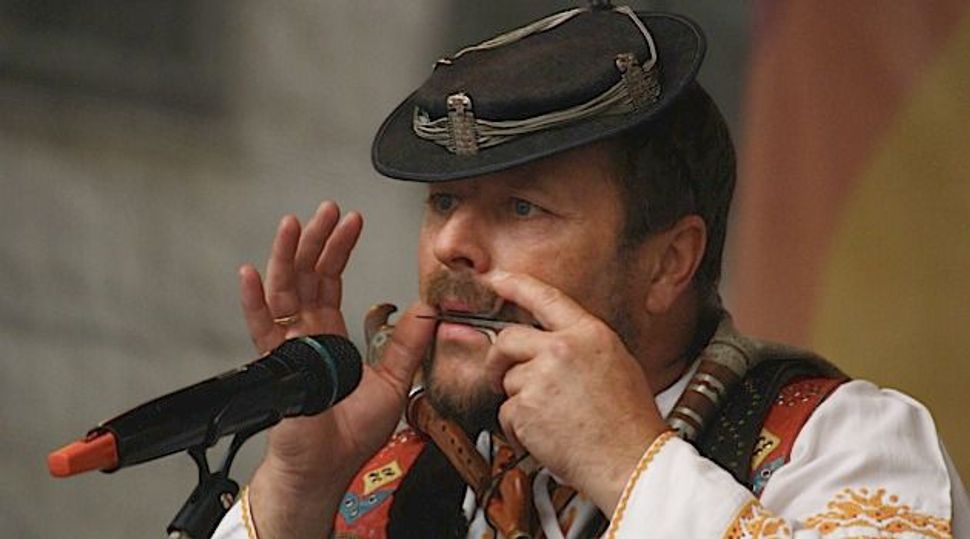 Jacob Sivak, Distinguished Professor Emeritus in the School of Optometry at the University of Waterloo in Ontario, writes:

“The Jew’s harp is a simple but common musical instrument that I acquired a few years ago, and I am intrigued by its name. Although I can find no reference to any linkage between it and Jews or Judaism, I wonder whether the connection might be its resemblance to various clamps used in circumcision — especially the one known as a Mogen clamp. This resemblance is more obvious in images of older or antique devices. Do you think this is where the Jew’s harp could have gotten its name from?”

Jew’s harps and circumcision clamps, I must say, are two things I have never had much experience with. But it’s never too late to educate oneself, and here is some of what I’ve learned.

To begin with, there is a bewildering variety of each, as might be expected of two devices with long histories extending over much of the globe. One of the oldest of all musical instruments still played today, the Jew’s harp most likely originated in Central Asia or China, from which it spread, before the discovery of the Americas, as far east as the Philippines and as far west as England and Ireland. Basically, it consists of a flexible strip of wood or metal slotted into an often horseshoe- or harp-shaped frame, the closed end of which serves the musician as a grip; placed between the teeth, and vibrated by a finger with the mouth serving as a resonator, this strip can produce melodies via changes in the position of the cheeks, lips and tongue. Because of its small size, inexpensiveness and relatively simple technique, the Jew’s harp, before becoming the rather rare instrument it is today, was extremely popular throughout Europe. Folk songs were played on it, musical compositions were written for it (including a concerto by Beethoven’s teacher Johann Georg Albrechts Berger) and as late as 1935, 1.5 million Jew’s harps were still being produced and sold annually in Europe alone.

The European Jew’s harp had a wide assortment of names, including Maultrommel in German, munnharpa in Norwegian, guimbarde in French, sciacciapienseri in Italy (with such dialectal variations as Sicilian marranzanu, Lombardian viabό and Campanian tromba degli zingari), biribao in Spanish and barimbau in Portuguese. Only in English, however, where the terms “Jew’s harp” and “Jew’s trump” (short for trumpet) first appear in the late 16th century, was the instrument ever associated with Jews. (One also finds the variations “jaw harp” and “juice harp,” but these terms appeared considerably later than “Jew’s harp” and are almost certainly corruptions of it.)

And yet, as Professor Sivak observes, Jew’s harps have nothing musically to do with Jews and were never considered Jewish instruments. Whence, then, their name? Two main theories have been proposed:

1) Jew’s harps were originally disseminated in England by Jewish peddlers, who carried them in their packs along with dozens of other household items sold door to door.

2) The “Jew’s” of Jew’s harp come from “gewgaw” (traditionally pronounced “gyewgaw”), a word that had, as far back as the 15th century, the secondary meaning of a flute or a shepherd’s pipe. Hence, when Jew’s harps were initially introduced into England, they were called, because of their shape, “gewgaw harps,” which eventually turned into “Jew-gaw harps” and then “Jew’s harps.”

The second of these explanations seems to me more likely, as there were practically no Jews, let alone Jewish peddlers, living in England when the Jew’s harp was introduced there. (The Jews were expelled from England in 1290 and not officially readmitted until 1655.) The “gyew” of gewgaw changing to “Jew,” on the other hand, would have been perfectly natural.

And now, along comes Professor Spivak with a third theory. What shall we make of it?

A circumcision clamp is a device for stretching the foreskin of the circumcised baby away from the glans of the penis and holding it tightly in place while the cutting is performed. The number of different kinds of circumcision clamps in existence (most of them modern medical inventions) is even greater than the different kinds of Jew’s harps; among them, the Mogen clamp, traditionally used by Jews over the centuries, is one of the oldest and simplest. (Its name comes from the Hebrew word magen, a guard or shield.) Essentially it is a piece of metal with a handle and a narrow slit through which the foreskin is pulled while the rest of the penis is protected, and there is indeed a certain resemblance between it and some Jew’s harps.

Can the Mogen clamp, then, have given the Jew’s harp its name? Although it’s an ingenious theory, it’s even less probable than the Jewish peddler hypothesis, because where would a 16th-century Englishman have had a chance to see a circumcision? “If you prick us,” Shakespeare’s Venetian merchant Shylock asks, “do we not bleed?” and every Jewish male child would certainly agree — but though Shylock was first represented by an actor in London in 1598, he could not have lived there openly until decades later. Gewgaw remains our default choice.