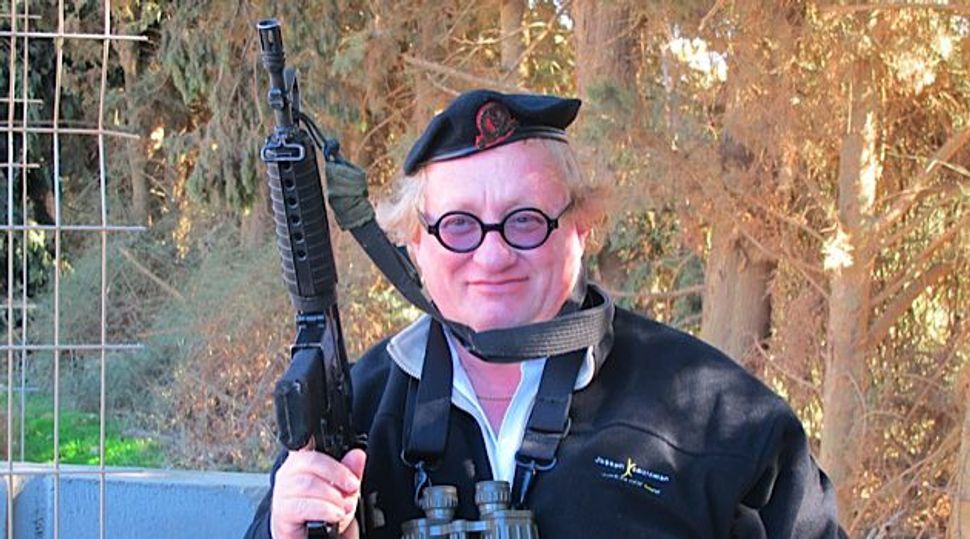 For days on end I have spent my time with countless Bedouins in the Negev, brought there by various NGO activists who wanted me to see how badly the Bedouins are treated by the Israeli Jews, and now I feel it’s time I meet a Bedouin who loves to represent himself, and his people, without any NGO helpers by his side.

So, I go north to meet Lt. Col. Magdi Mazarib, commander of the IDF’s trackers unit — a unit made up of Arabs who stand guard at Israel’s borders, risking their lives to protect Jews from Arab infiltrators. It sounds like a fairytale to me and I want to see if these people actually exist.

Magdi sits in his army camp’s office, a huge smile on his face. Young Bedouins, all IDF soldiers, seem to drink every word coming out of his lips with much desire and the utmost respect.

This Magdi is a character, no doubt. As I walk in I see him using a rosary and I ask him if he’s Christian. “Would you like to have the rosary?” he replies, and hands it to me. Holding it in my hands I realize that this is a misbaha, an Islamic rosary, which has numerous beads for the 99 names of Allah.

I enjoy the feel of the rosary in my hands and we go on talking.

Are the Bedouins loyal to the state of Israel? I ask him.

“I’m an Arab, a proud Arab, a Muslim, a Sunni. And I am an Israeli too. These terms don’t contradict.”

I tell him that when I lived in this country, over 30 years ago, I never met a Bedouin who said, “I am Palestinian.” But that changed, didn’t it? Almost all of the Bedouins I meet these days define themselves as Palestinians.

Magdi does not seem impressed with my discovery: “A woman is loyal only to one man, not to two,” he tells me.

I tell Magdi that I talked with Bedouins in the Negev and they said to me, “The Jews are controlling us and we don’t want the Jews.”

“Which villages in the Negev did you go to?”

But before he explains Abu Kweider to me, he gives me a little lesson:

“We are Bedouins, we are not Druze.” Bedouin villages are made of tribes, he tells me, and the village called Abu Kweider is no exception.

Who are the Abu Kweiders?

“A family that’s originally from Gaza. If you want to know my opinion: They are not Bedouin!”

Good to know. And who is Magdi? “I am not a Zionist like the settlers are,” he tells me. “I am an Israeli. I respect the state, I even respect the Israeli anthem. When the Israeli football team succeeds I’m happy and I want them to get into the World Cup. I love Maccabi Tel Aviv very much.”

“Why then are you not a Zionist?”

Magdi is a Bedouin, of course, who started his career in the IDF as a tracker, just like his father, and many others in his family. He rose in the ranks to become the chief commander of the trackers, but soon he will quit his job and move on to a university to study communication, to translate his army success into civilian success. Yet, unlike some Israeli Jews, his dream of success is inside Israel, not in Europe or America.

“It is our great luck — and I’m not trying to use flattery here, believe you me — that it so happened that we and the Jews are living together here,” he says. “It is our generation’s great fortune — my family, my parents and that of my grandparents’ — to be together with the Jews and live in Israel. Look around us, look at the Middle East, a region that has recently gone back 500 years. Israel is the only reasonable, healthy country in this region. This is a fact. The state of Israel is good for the Muslims, for the Christians and for the Jews. By the way: The Jews have not come here, to this place, for no reason. When you dig deep in the earth of this land, you see evidence of the Jews who have been living here many years ago. The Jews of our time, who came here from Europe, have their roots in this land. One thousand years ago there was a synagogue here, and 2,000 years ago there was a synagogue there. All in this land. The root of the Jews is here. And that’s why they came here last century. The Jews did not go to Turkey and said: ‘We demand Turkey for ourselves.’ They came here, to this country, to their ancient home.”

Magdi might not call himself “Zionist,” but he is the biggest Zionist I’ve ever met.

We drink some good Arab coffee, prepared by his soldiers, and abruptly he shares a personal story with me. “My wife’s mother,” he tells me, “is a Polish Jew.”

The Bedouin soldiers laugh as they imagine the Polish Jewish lady in a Bedouin tent.

“Do you speak Yiddish?” I ask him.

Another burst of laughter.

But Magdi keeps a serious face. “My wife’s grandmother,” he says, “is a Holocaust survivor.”

This is the last thing I expected to hear from Sheikh Magdi.

I came here to hear about trackers but he speaks Holocaust unto me. And before the conversation shifts into stories about Auschwitz and Lodz, I quickly change the topic.

“Why are the Bedouins trackers?” I ask. “Do you have better noses?”

“It has nothing to do with the nose or the eye. To be a tracker you need to have a suspicious nature, and the Bedouins are suspicious people. We are people who, by our tradition, have experienced blood revenges and honor killings, and when we see a strange car stopping next to our home, all the fuses in our heads light up and we immediately ask: Who is that man and why is here? Immediately we walk over to the man and say: ‘Can I help you?’ This quality, this suspicious nature, is what I need at the (Israeli) border; that’s the soldier I want to have!”

I ask Magdi if he could take me to his place of work, the Lebanese border.

We get into his army jeep and he drives. The landscape is gorgeous, tainted only by a fence that we drive along. Israel is on one side of the fence, Lebanon on the other. I spot yellow flags on the Lebanese side. No, they are not the flags of Lebanon but of Hezballah. It is amazing to see: The army facing Israel at the border is Hezbollah, not the Lebanese army.

“Could you take me to the part of the border, right next to where the Lebanese and Hezbollah are?” I ask him.

He drives me to the nearest point of the border into Lebanese territory, where we get off.

“Look at the top of the hill facing us. What do you see?” he asks.

“Do any of the houses remind you of something?”

The one with the dome —

“Right. That’s a replica of the Al-Aqsa mosque. They built it to tease the Jews.”

Next to us I see a black structure that resembles a map of Palestine, covered with paper-printed pictures of different people, probably shahids (martyrs), and below them is a message written in awfully bad Hebrew: “Sure we return.”

I ask Magdi if he would mind lending me his assault rifle, just for a little bit. I want to know if Magdi trusts me, and how much.

Magdi, the chief of the Suspicious People, hands me his rifle — with the bullets in it.

This is against the rules, and every soldier knows it. But Magdi has no rules — except his trust or suspicion.

To complete my little game I put his hat on my head. Then I hold his rifle, pointing it in whichever direction, and Magdi looks at me, smiling.

Magdi, you see, doesn’t need NGO activists to translate him. His smile is the biggest translator I have ever seen.

I hand him back his rifle and his hat but keep the rosary tight in my pocket. If I ever doubt that Arabs and Jews can live together, the rosary will be there to assure me.

Tuvia Tenenbom, author of “I Sleep in Hitler’s Room” is working on his next book “Alone Among Jews.”