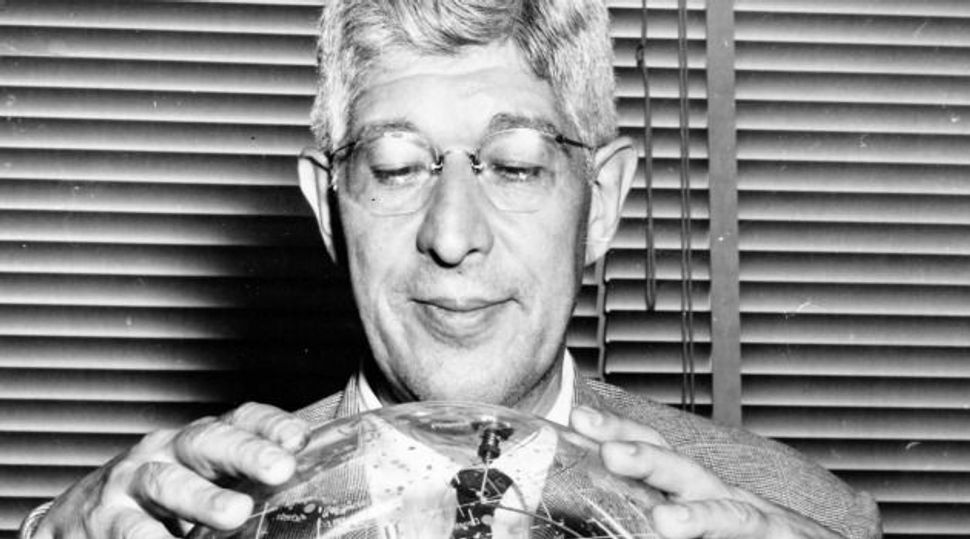 Out to Space: Dr. Joseph Kaplan, a Hungarian born, Jewish astrophysicist, was active in the United States Satellite Project creating the first American satellite to orbit earth. He also founded the Institute for Geophysics at the University of California. Image by Forward Association

Shooting in the Shvitz

Isaac Schwimmer, a civil engineer who lives on East 7th Street, was taking a shvitz in the Turkish baths on Third Street near Avenue A. Apparently overcome by the heat, Schwimmer fell asleep in the steam room. He awoke to find his diamond ring missing. Furious, he accused Spunky Congers and Louis Bernstein of stealing his ring while he was asleep. The two men claimed not to know anything about it. Schwimmer called the police and told them the story after they arrived, demanding that the officers arrest Congers and Bernstein. But without any evidence, it wasn’t possible to make an arrest, and the two men were told they could leave. Unable to control his anger, Schwimmer pulled out a revolver and shot them. Both were rushed to Bellevue Hospital, where the doctors said they would almost certainly die of their wounds. Schwimmer was placed under arrest.

Kissing New York’s ground after disembarking from the ship, “City of Baltimore,” the famed Viennese composer Hermann Leopoldi said: “How thrilled I am, how happy! Here I can breath freely. In Germany everyone carries a weapon in hand.” Leopoldi was one of the most well-known and successful composers of popular song until the Nazis took over Austria last year and he was forced to stop working. He was arrested and sent to the Dachau concentration camp for four months. He was later transferred to Buchenwald, a different concentration camp, for another five months. Leopoldi’s wife and daughter, who had arrived earlier, met him at the port. The family will settle in the Bronx.

According to a witness at the ongoing “Auschwitz trial” of Nazi criminals in Frankfurt, West Germany, prisoners were sometimes made to sing and dance before being sent to the gas chambers. The witness, Herman Biermanski, was a political prisoner who fought against Francisco Franco in the Spanish Civil War. He was first arrested in Berlin in 1940 and placed in a cell with one Wilhelm Boger, who was in jail for theft. Boger is one of the Nazis currently on trial in Frankfurt. During his testimony, Biermanski pointed out Boger as one who forced dozens of Gypsies into the gas chambers. He testified that he saw Boger shoot victims at close range, including a German woman who had been married to a Jew.