‘Divergent’ Is a Cautionary Tale for Jews 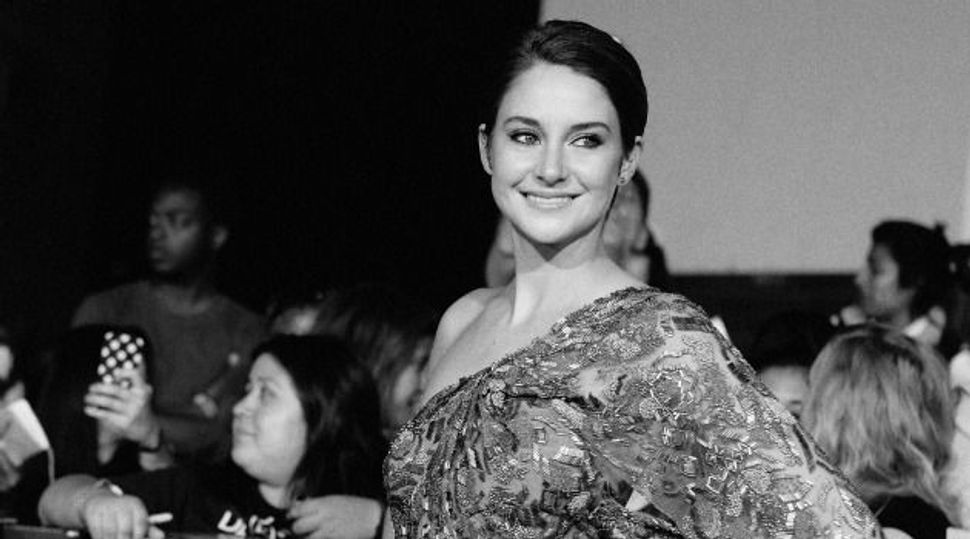 Prior Knowledge: Shailene Woodley plays Beatrice Prior in the adaptation of Veronica Roth?s novel. Image by Getty Images

A few years ago, I wrote about how a little film called “Twilight” was the quintessential Jewish story: inappropriate boyfriends, unusual dietary habits and an outrageously lavish wedding. I’d now like to remove my tongue from my cheek and draw your attention to a more serious lesson the Jewish community can take from young adult fiction.

This weekend saw the release of “Divergent,” the adaptation of Veronica Roth’s bestselling dystopian novel. Set in near-future Chicago, the society is divided into five factions based on personality: Abnegation (the selfless, who run the government), Amity (the peaceful, who farm the land), Candor (the honest, who regulate the law), Dauntless (the brave, who make up the army) and Erudite (the knowledgeable, who pursue education). Each faction has its own customs, uniforms, foods and daily routines — and inter-sect mingling is highly frowned upon.

At the age of 16, all citizens take a test that tells them which faction best suits them, after which they are fully initiated into a faction— either that of their parents, or another of their choosing. Those who walk away are called defects, and there’s no going back. The society honors this maxim above all: faction over blood.

The protagonist Beatrice Prior (played by Shailene Woodley) is raised in Abnegation, where she wears loose gray clothing, refrains from touching other people and isn’t allowed to look in the mirror too often. Feeling confused and stifled in her home community, she chooses Dauntless, where she can run free, tattoo her skin and strengthen her mind and body to protect others. But she doesn’t belong wholly in either faction. Her aptitude test revealed that she is drawn equally to Abnegation, Dauntless and Erudite. She is Divergent.

As such, she becomes a hunted member of society. “The brilliance of the faction system is that conformity to the faction removes the threat of anyone exercising their independent will,” Jeanine Matthews (played by Kate Winslet), leader of Erudite and the story’s antagonist, explains in the movie. “Divergents threaten that system.”

The factions were founded after a devastating war in order to prevent future conflict and to teach people how to be good again, value by value. Before long, however, the factions turn against each other, poisoning minds with both harmful propaganda and a will-controlling injectable serum. It quickly becomes obvious that each trait is ultimately meaningless when kept isolated from the other values that together build a strong, respectable and cohesive society.

Let “Divergent” be a cautionary tale for Judaism.

Like the story’s factions, religion’s different sects have sprung up at various stages through history as the result of adversity or persecution. But today it sometimes seems that Judaism’s factions are still at war — not with an external enemy, but with each other.

The news is full of stories of Jewish civil war. Earlier this month, the Israeli government passed a bill that removes Haredi exemption from army service, meaning the ultra-Orthodox will no longer be able to avoid the draft by studying in yeshiva, exacerbating the tensions between Israel’s religious and secular communities. Not long before that, the Israeli city of Bet Shemesh was similarly and seriously divided between mayoral candidates representing a variety of Jewish identities. And late last year, the British Jewish community tore at each other’s throats over whether the Limmud conference was an appropriate representation of Judaism after Chief Rabbi Ephraim Mirvis confirmed he would attend the event.

Those are the stories that make headlines. Off the page there are innumerable incidents of inter-sect intolerance and of shunning, or even sullying, those who are considered to practice the “wrong” form of Judaism.

Is making it home in time for Shabbat more important than helping a struggling woman carry a stroller up the subway stairs? Is avoiding all morsels of bread on Passover more meaningful than accepting a gay, trans or female person as equal in your society? Is fighting to defend Israel more respectable than dedicating your life to learning in yeshiva? And is keeping a member pledged to your faction without freedom of his or her own identity of any value at all?

If you’re seeking an answer to why young Jews are turning away from traditional Judaism, look no further than “Divergent.”

In the story, those who defect from their faction to join a rival community are seen as harsh rejecters of their parents’ values, and those who are Divergent are considered downright dangerous. The same can be said of traditional Judaism, which tends to frown upon those who follow their own faith path if it deviates from that of their upbringing. But forging your own identity would be an admirable endeavor, not seen as a stab in the back, if there were less divisive animosities between the factions. In fact, I think the idea of divergence is becoming particularly pertinent for my generation.

Last year’s much-discussed Pew Study about American Judaism showed that younger Jews are far more likely than their elders to identify as a Jew of no religion — 32% of people born after 1980, compared to 19% of their parents’ generation and 14% of their grandparents’. These Jews of no religion are about half as likely as their religious counterparts to feel a responsibility to caring for other Jews, and a tiny fraction as likely to donate to a Jewish organization or become a member of a synagogue.

I’m a member of that “millennial” generation, and to which faction of Jewish society I belong is a question I ask myself regularly. I was raised in an observant Modern Orthodox community, which I share with my family and many of my closest friends. As a young, liberal woman, my comfort zone lies further toward the Conservative community. Philosophically, I find myself drawn toward atheism or agnosticism. And practically — well, I’m still working that one out.

I sometimes wonder if I spend more time trying to define my Judaism than actually living, studying and appreciating it. When others ask, I usually reply that I’m post-denominational. But now I have a better answer. I’m Divergent.

Lauren Davidson is a freelance journalist based in New York.

‘Divergent’ Is a Cautionary Tale for Jews