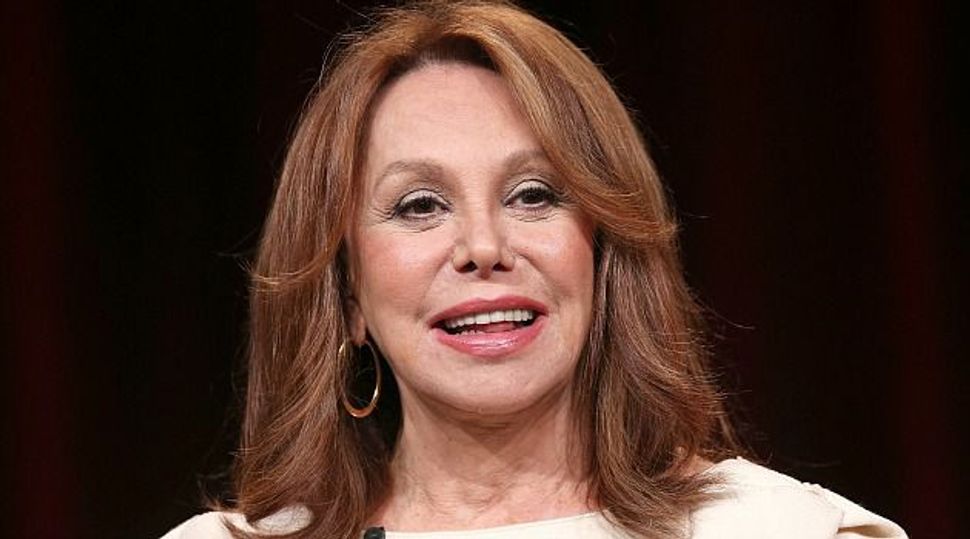 Marlo?s Show: Marlo Thomas (above) collaborated with the overwhelmingly Jewish editors of Ms. Magazine to produce the TV special ?Free To Be You and Me.? Image by Getty Images

Forty years ago, when Marlo Thomas met with executives at ABC Television after turning in the final cut of “Free to Be… You and Me,” the one-hour special they’d commissioned based on her best-selling children’s album, they told her, in that way the business people who control our media so often do, that they loved it and that she had to utterly change it. They wanted her to cut three segments.

One was “Parents Are People,” which showed Harry Belafonte and Thomas performing various traditionally male or female jobs in such a way as to challenge their gender specificity. The executives took issue with one brief shot in the middle of the song depicting the two of them pushing baby carriages across Fifth Avenue. This, apparently, might be misinterpreted to imply that they were married; America’s children, the executives believed, weren’t ready for positive images of miscegenation.

Typical and shameful, yes, but less central to the message of “Free to Be…” than their other concern, which involved the songs “It’s Alright to Cry” and “William’s Doll.”

In “It’s Alright to Cry,” a towering Rosie Grier smiles pacifically at the camera and croons about the cathartic power of tears. “I know some big boys who cry too,” he proclaims over a montage of world leaders, sports heroes and macho men breaking down and bawling. This softened image of masculinity was problem enough for the execs.

What was worse was the message conveyed by “William’s Doll,” a Broadway-style story song written by Sheldon Harnick, the lyricist for “Fiddler on the Roof,” about a small boy who’s good at all the things boys are supposed to be good at — baseball, primarily — but really just wants a doll “to wash and clean and dress and feed.” This was what really got the executives’ backs up. They told Thomas that if they allowed “William’s Doll” to air on national television, they’d be responsible for turning every boy in America into a “sissy.”

Thomas refused to change a thing and had enough clout at the time to get her way. The show aired as planned and the rest is history.

What’s interesting to me about this story is that the television special was produced in 1974 as a collaboration between Thomas and the forthrightly feminist, overwhelmingly Jewish editors of Ms. Magazine (both Gloria Steinem and Letty Cottin Pogrebin helped mold “Free to Be…”), and explicitly strove to empower little girls to believe that they could do anything and be anyone their hearts desired. Yet the controversy was caused not by the show’s challenge to traditional notions of femininity but by the way it dealt with masculinity.

By ’74, the ethos of the second-wave feminism that saturates “Free to Be…” had become a zeitgeisty trope in the national conversation. This is not to say that feminist goals had been achieved (they hadn’t, and haven’t still), just that they existed within a preexisting, culturally relevant context. People expected the editors of Ms. to tell little girls they could grow up to be doctors and police officers.But to tell little boys they could be sensitive and kind and interested in girlish activities? This was unacceptably transgressive.

And it may not have turned us all into “sissies,” but those execs were right. It profoundly molded many straight men who were little boys when the show came out.

I may not have grown up to be Alan Alda, but I long for a world in which others are people first and competitors never. I hold the arts and culture in higher esteem than I do money. I don’t believe men are inherently better or more capable than women. I wince and physically recoil when I see other men acting macho or piggish.

Watching it now, 40 years on, I’m struck not only by the way it challenges gender norms, but by the racial diversity of its cast, as exemplified by the mix of black and white and Latino and Asian children twirling on the Central Park carousel in the opening number. And the kids all seem classless. They were probably rich or at very least comfortably part of the artistic class that New York City still made room for in those days — the children of the cultural elite who trafficked in the same worlds as Thomas and the Ms. Editors — but the fashions of the early ’70s were so terrible that they all look like they go to public school. In segment after segment — the “Parents are People” song described above, “When We Grow Up,” in which Roberta Flack and (ironically) Michael Jackson sing about how “we don’t have to change at all,” and “Sisters and Brothers,” in which the Voices of East Harlem, an assortment of African-American and Latino teenagers dance with a token white girl and proclaim, “Ain’t we lucky, everybody, looking out for everyone” — gender and race and class are all mixed up together into a larger stew of acceptance.

Because here’s the thing. “Free to Be…” is about more than gender. It’s the product of a time before the left atomized into factions warring amongst themselves over cultural power and academic funding, a time when the philosophical underpinnings of secular humanism and class consciousness (both of which owe much of their intellectual heft to the great secular Jewish thinkers of the 20th century) united progressive movements in a common cause. Forty years on, “Free to Be…” is a cultural touchstone, the apotheosis of the particular ideals of that particularly idealistic moment in American history, a vision of the new classless, color-blind, equal society that might rise from the rubble of all the institutions that were in the process of being torn down.

What was truly radical about “Free to Be…” was that instead of arguing for a world in which the problems of class, race and gender had been solved, it transported children to this better world and let them live there. They could watch it repeatedly, demanding to listen to its catchy tunes a hundred times in a row, as children do, until the vision became their own. Thomas and her compatriots gambled on the possibility that, by placing children in an imaginary world where the struggle was over, these children might grow up to have different, more equitable cultural assumptions. We, the children of the 1970s, would assume that the show’s mild-mannered, communitarian vision of a world in which kindness trumped competition, and sexual, racial and class distinctions didn’t exist, was simply the way things were.

The problem turned out to be that when the boys who were raised on “Free to Be…” grew up, the executives and hedge fund managers and frat boys who saw sensitivity as a weakness not only still existed, but as agents of capital, they also had tightened their grip, if not on the culture, then on the markets and industries that we sensitive, artistic flowers had to engage with in order to survive. And no matter how much we might have wanted the world to magically transform into a garden of rainbows and free hugs and equality for all when we came of age, they weren’t going to just sit and let that happen. If they couldn’t control the prevailing cultural attitudes, they could at least control the way they were instituted, stripping out the compassion, with all the suspicious leftist notions of economic justice compassion implied, and reframing goals on capitalistic rather than humanistic terms.

We’ve absorbed the lessons of the self. We each in our way know how to loudly proclaim our own individual right to be ourselves. But we’ve got a long, long way to go on the looking out for everyone front.

Meanwhile, we can listen to the album and watch the show and shamelessly cry for a world that could have been as we dream of a God who may never come.