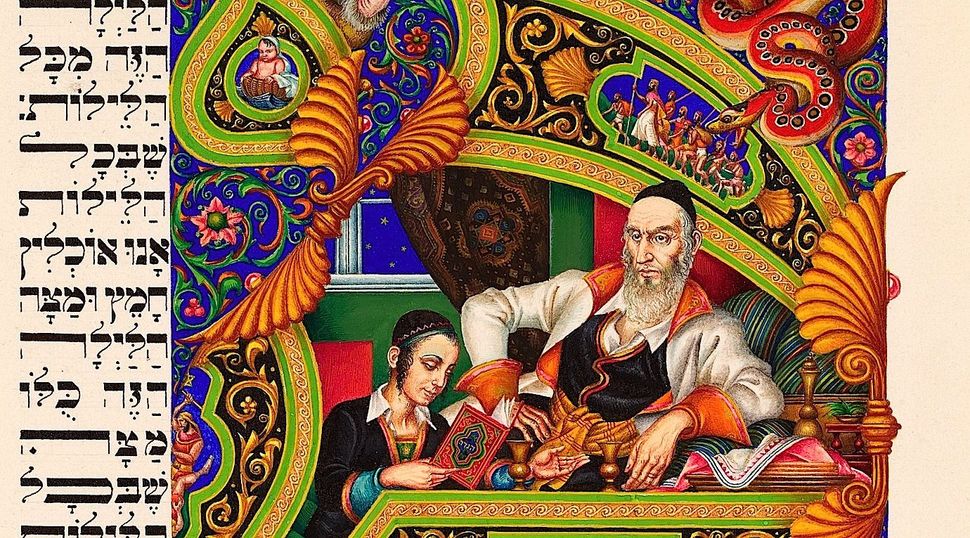 Tens of thousands of copies of “The Szyk Haggadah” have been read at Passover Seders around the world; but the original pages of the book, hand-lettered and hand-painted in the 1930s, have not been shown in public for 60 years. Now all 48 watercolors and gouaches created by a brilliant Polish-born illustrator can be seen in “Arthur Szyk and the Art of the Haggadah” at San Francisco’s Contemporary Jewish Museum. Szyk’s book has rightly been compared to treasured illuminated manuscripts from the Middle Ages — with a major difference that his text and pictures were designed for reproduction and use at modern Seders.

Along with Szyk’s masterful depiction of biblical history and Seder rituals, the exhibition also remembers the artist’s own period of exodus, which began in Poland and took him to England, Canada and the United States. Szyk (1894-1951) saw alarming parallels between ancient Egypt and Nazi Germany, and created his Haggadah in response. Hitler’s mustache appeared on Pharaoh’s face in one early sketch. Desert serpents wore swastikas in Szyk’s vision of Egypt. The illustrator became an activist in the ’30s, promoting resistance to tyranny through his Passover imagery.

Initially Szyk encountered some resistance himself. Publishers in Poland, afraid of his swastika-tattooed snakes or Nazi reactions to them, wouldn’t print those images; he painted the emblems out, and left Poland for England in 1937. Despite the magnificent illustrations Szyk had completed by then, publishers did not line up at his door in England, either. The artist wrote that he was “completely financially ruined” by lack of support for the project in 1938. Eventually friends in London and Lviv, Ukraine raised money to cover self-publication of the first “Szyk Haggadah,” a limited edition of 250 copies sold for $500 each in 1940. Today you can buy a deluxe edition for $8,800, or a handsome paperback version with new translation and commentary for $17.

At the Contemporary Jewish Museum, separately framed pages display Szyk’s gorgeous renderings of Exodus, and feats by Moses, Miriam, later rabbis and the goat made famous by “Had Gadya”; all are pictured amid Hebrew calligraphy, intricate border decorations, and ornate initial letters fit for the finest illuminated manuscript. The cast of characters also includes 20th-century East European Jews seated at Seder tables, a few pioneers in Palestine, and a wicked son wearing a Hitleresque mustache. Bright hues of yellowish-orange, green and red enliven scenes of the struggle for freedom and justice. The parted Red Sea is bright blue.

Szyk’s gifts as a manuscript illuminator and miniaturist are best understood by a close look at the original pages. It seems almost impossible that a man’s hand — no printing press — shaped the perfectly lettered words and finely detailed images. Spectators might want to bring a magnifying glass (or use one provided by the museum) for that close look. Szyk’s miniature paintings give credence to the belief that small is beautiful. A row of pyramids and the Egyptian desert fit into space the size of a postage stamp. Page size rarely exceeds 5 1/2 by 6 1/2 inches. Irvin Ungar, an expert on Szyk, says the artist painted with a brush that had only one hair. He used other brushes and quill pens, too; but whatever implement he held, Szyk was able to paint almost microscopic details and adeptly captured large events in small spaces. Commenting on Walter Benjamin’s fascination with miniatures — which Szyk seems to have shared — Hannah Arendt wrote that Benjamin took “delight that two grains of wheat should contain the entire Shema Israel [engraved on them]” since a small object could “contain in the most concentrated form everything else.” Szyk may not have fit everything into his Passover scenes, but he added details not found in other Haggadot. Holding the severed head of Goliath, David (not usually a Passover character) appears twice as one of the victors over oppressors. With more graphic violence, the artist shows Moses clubbing an Egyptian overseer who mistreated a slave; Szyk clearly sees a need for militant Hebrew leadership, and celebrates it.

The illustration titled “God’s Promise” adds an unusually somber portrait of victory to the story: At the top of a pile of war wreckage, above human skulls, Roman helmets, and ancient weapons, we see the Ten Commandments and a wary Passover celebrant looking over the ruins. The biblical promise of justice after centuries of oppression had not been fulfilled when “God’s Promise” and Szyk’s other 47 pages were first printed in 1940. Bombs were falling on London, but that didn’t stop the presses from rolling out this contribution to the Allied war effort.

After he moved to the United States, Szyk launched another, more comic offensive against Hitler. His caricatures ridiculing dictators on the covers of Time, Collier’s, and the Chicago Sun reached millions of Americans during World War II. A hint of his satiric sensibility can be seen in a “Szyk Haggadah” painting that parodies Leonardo da Vinci’s “Last Supper.” Christ’s position at the table has been taken by Rabbi Akiba, who sits at Seder with four other rabbis drinking wine and discussing messianic redemption. The Messiah has not yet arrived.

As if to answer why Szyk’s Haggadah is different from all others, one section of the art gallery displays a variety of other Seder manuals. Some rival Szyk in their political activism. “The Freedom Seder” rests adjacent to “Freedom from Diety Language, A Renewal Haggadah Which Omits Words of Deification” and a “Passover and Ramadan Liberation” booklet. Kibbutz and Israeli army Haggadot including “The New American Haggadah” and “The Santa Cruz Haggadah,” and rare antique publications add to the mix. Many of these volumes are visually more compelling than the popular Maxwell House edition of the Passover story. But if you judge the books by their calligraphy and their illustrations, Szyk’s is easily the most beautiful Haggadah in the room.