All The 2014 Haggadah Info You’ll Ever Need 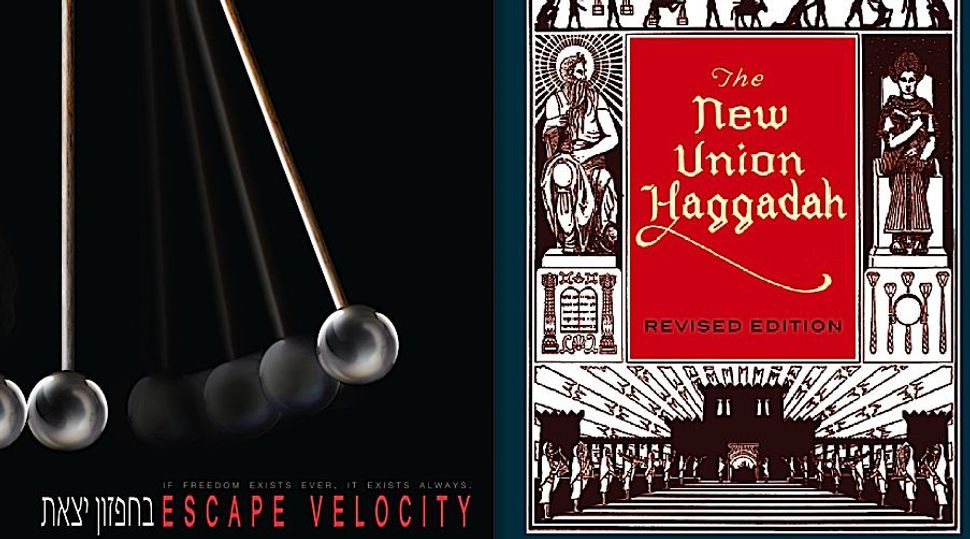 New Vs. Old: This year?s crop of Haggadot includes everything from the old-fashioned to the post-apocalyptic.

Remember 2011? Back then, I breathlessly wrote in these pages about a new Haggadah that was online. And then, last year, a Haggadah app for your ipad. Remember when that was new?

This year, for the first time, the majority of new Passover Haggadot are no longer on paper. And yet, oddly enough, I found myself gravitating to the most traditional new entries of all — the Reform movement’s revised Union Haggadah and an old-school, print volume with commentaries from three very different rabbis.

First things first. Haggadot.com has, in the three years since its launch, become a well-oiled Pesadik machine. Templates, video clips, clean web design — there is no longer any excuse for not making your own Haggadah, mixing and matching from the wealth of online resources, like making a Passover playlist. Haggadot.com is no longer just a start-up — to me, it’s the industry standard. Now I’m ready for Machzor.com.

There are also a bevy of Seder apps, some which lead participants through a straightforward Seder, (Kosher Penguin’s “Haggadah for Passover”), others with games for kids (StoryChimes’s “Passover — the Journey to Freedom”), and others that recite and sing the whole Haggadah for you (“A Cantor’s Seder”). This in addition to Melcher Media’s “The Haggadah,” which was glowingly reviewed last year and is still a wonderful way into the Seder ritual.

Of course, Passover technologization is all well and good, but perhaps in danger of self-parody. I have visions of families tapping Go on the “Cantor’s Seder” and leaving Emanuel Perlman to sing to himself while the real-life attendees schmooze about March Madness. And not every Haggadah needs to be virtualized. The late Edgar Bronfman’s idiosyncratic “Bronfman Haggadah” — which I reviewed last year — is only marginally enhanced by appearing on your iPad as opposed to its handsome Rizzoli edition. The text itself is still quite interesting, but did we need an app?

Likewise, the “Ultimate Digital Haggadah,” released too late for our Haggadah roundup last year, is an exquisite visual presentation (with accompanying narration). But without transliteration, decorations, or the layered interpretations of Melcher’s “The Haggadah,” it is a beautiful artifact — not so different from a paper Haggadah. However, props must be given to the marketing team of the “Ultimate Digital Haggadah” for coming up with the slogan “From Abject Servitude to App-solute Freedom.”

Perhaps my favorite Passover app isn’t a Haggadah at all, but Rusty Brick, Inc.’s “No Chametz,” which includes the Orthodox laws of finding, destroying and selling chametz, a step-by-step guide to the process, and even a handy flashlight. Alas, intended for a frum audience, “No Chametz” doesn’t include transliterations. Maybe next year. But it’s a good example of a simple application that is enhanced by technology, rather than merely adapted to it.

So that leaves this year’s new paper entries, four of which I’ll focus on here. Conveniently, they map onto the four children of the Seder itself.

The wise son, and to me, hands down the best new entry of the year, is “The Night that Unites,” published by Urim Publications and assembled by Aaron Goldscheider. At $39.95 per copy, it makes a good case for a downloadable app. But buy one copy for the treasure trove of insights, primarily from Rabbi Joseph Soloveitchik, Rav Kook, and Rabbi Shlomo Carlebach. Like many interpretation-rich Haggadot, this one is not suitable for seat-of-the-pants, read-as-you-go use at the Seder. Rather, it rewards advance preparation; bookmark your favorite parts, and share them on the first night of Passover.

What “The Night that Unites” misses, interestingly, is the incongruity of its three primary sources. This trio is a motley crew indeed: the rational legalist, the nationalistic mystic and the hippie. Unfortunately, “The Night that Unites” often lapses into hagiography, whitewashing Soloveitchik, Kook and Carlebach into three barely distinguishable exemplars of everything good and righteous. Ironically, “The Night that Unites” unites too much. It would have benefited from exploring the productive tensions between these three luminaries, rather than glossing them over.

Still, I learned a lot, and considering that I’ve reviewed a dozen Haggadot in each of the last six years, that’s saying something.

At the other extreme is this year’s wicked son, Stan Lebovic’s dazzling, weird “Escape Velocity: A Post-Apocalyptic Passover Haggadah.” Although it’s structured along the Seder, “Escape Velocity” is less Haggadah than extended rumination on the Passover story and associated themes. It is huge — 11-by-17, about 200 pages, and filled to overflowing with commentary. It is also visually arresting, with many glossy, striking (if a little dated-looking) computer-generated artworks.

I’ve called Lebovic the wicked son here not to defame him, but to defend him. The apocalypse of the book’s subtitle is the Holocaust, and like Lebovic’s previous work, “Black is a Color,” this is a volume obsessed with the theological rupture of the Shoah, for better or for worse. For me, “Escape Velocity” is unhelpfully haunted by the “apparent Deicide” that Lebovic declares the Holocaust to be. I am not a Holocaust Jew, and I don’t want to be one.

However, many of us are. Many Jews simply cannot pantomime the Seder in the shadow of Auschwitz, and that shadow is cast whether we like it or not. For these Jews, “Escape Velocity” is a post-Holocaust retort par excellence. It rebels against traditional theology, only to reclaim Passover’s redemptive message from the ashes. Although he doesn’t take this approach in his discussion of the four sons specifically I felt as though for Lebovic, the only response to the Holocaust is the wicked son’s questions, his attitude, his alienation. And yet Lebovic turns toward, not away from, the Jewish people as a whole.

This year’s simple son is definitely the “Sixty-Minute Seder,” a slim volume compiled by husband-and-wife team Cass and Nellie Foster. It is what it says it is: a very concise, easy-to-follow rendition of the Seder, geared to non-Hebrew speakers and non-experts. It accomplishes what it sets out to accomplish, and is perfect for those looking for a Seder that, unlike the one described in the liturgy, doesn’t last until sunrise.

A funny thing happened while reviewing CCAR Press’s new version of the famed 1923 “Union Haggadah.” I was all set to lump this together with last year’s CCAR release, “Sharing the Journey: The Haggadah for the Contemporary Family”: good, competent, and Reform-movement-centric. But, amid Lebovic’s Photoshop-Baroque and the literal bells and whistles of talking Haggadah apps, I found the simplicity and elegance of “The New Union Haggadah” deeply refreshing.

This is not a kitchen sink Haggadah. On the contrary, the merit of “The New Union Haggadah” lies in its curation. In a way, its form is very old school, very Web 1.0. A group of experts selected its handful of texts and themes, arranged in the classic leader-response format. And you know what? It works. This is not a choose-your-own-adventure Haggadah, but it is a Haggadah that can be used. Updated for the 21st century, it is free of stilted language, thees and thous. It’s gender-neutral and post-particularist. But as the volume’s introduction discusses, “The New Union Haggadah” is also self-reflectively old school. Its editors have realized that there’s value in the old-new forms of the Reform liturgy, and have embraced them.

As such, “The New Union Haggadah” is the most postmodern of the bunch, a careful re-appreciation of the simplicity and utility of an older form. As Paul McCartney once sang, “I go back so far/ I’m in front of me.”

I admit, as someone often cast in the role of spokesperson for post-denominational Judaism, iSpirituality and all that, it feels a little odd to recommend a movement standby. But maybe not. The last few years have seen celebrity Haggadot that are impossible to use (e.g., “The New American Haggadah”), intricate textual/artistic artifacts, and various helpful how-tos like last year’s “The New Discovery Haggadah” and David Arnow’s useful kits. So why not a usefully curated one that actually delivers the goods?

Personally, I’ll still be conducting my Seder with multiple liturgies and original contributions from participants. But what’s most important isn’t the form, but the content. Are you asking questions? Are you teaching your children? Are you making the old new again? Are you being authentic, honest, and real? Whatever enables you to do those things — go for it.

Jay Michaelson is a contributing editor of the Forward. His most recent book is “Evolving Dharma.”

All The 2014 Haggadah Info You’ll Ever Need