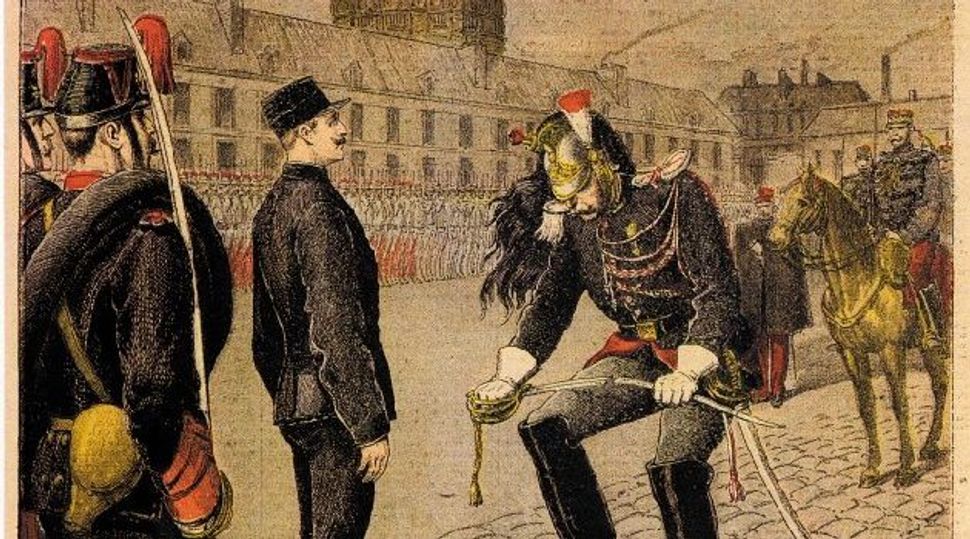 The public trial for treason of French Jewish captain Alfred Dreyfus has proven fodder for everything from anti-Semitic walking cane handles to a riot-inducing 1931 play and another play in 1974, which the New York Times panned as a flop. Roman Polanski is reportedly directing a film about Dreyfus, which is no wonder, since the Dreyfus Affair continues to “intrigue and confound” even after a century, as Robert Zaretsky wrote recently in the Forward.

Dreyfus also was said to have inspired the emergence of Zionism as a movement. The officer was publicly degraded in an 1895 ceremony at the Paris École Militaire, where his sword was snapped in half among other embarrassments, and where the crowd yelled, “Death to Dreyfus. Death to the Jews!” Theodor Herzl would later credit those cries with solidifying his conviction that there needed to be a Jewish state, although in the new book “Revising Dreyfus,” Jess Olson, associate professor of Jewish history at Yeshiva University, refers to that claim as “mythology.”

The book, which is edited by Maya Balakirsky Katz, associate professor of art history at Touro College, includes chapters from 10 other contributors, as well as an English translation, for the first time, of French illustrator Henri-Gabriel Ibels’s 1898 work “Allons-y!” (“Let’s go!”), the earliest illustrated series about the Dreyfus Affair. The book as a whole focuses on visual responses to and interpretations of the Affair by and for both supporters and opponents of Dreyfus.

Dreyfus not only motivated the early political Zionism of Herzl, according to the book, but he also can be credited with setting the stage for blogging and social networking. The 12-year-long Affair became the first modern media event and the first courtroom melodrama, according to Katz, with a variety of publications, postcards and other media jockeying to shape public opinion about the trial. Émile Zola’s article, “J’Accuse,” may be the best-known contemporary media response to the Affair, and it earned its author a year in prison and a 3,000-franc fine.

Zola didn’t quite take selfies, but he did do what one might describe as the 19th-century version of Googling himself. The novelist and critic’s friend Paul Alexis offered a view of the former “as a media-consumer in his private home experiencing the press coverage of himself and fantasizing about redeeming his public image,” writes Katz in the book’s introduction. “Zola apparently took a deliberate interest in the publication of textual and visual abuse… and Alexis’ description of Zola fastidiously poring over his media coverage reminds us that public images are pre- personally experienced.”

One of Katz’s chapters, “Henri-Gabriel Ibels, Nineteenth-Century Blogger,” highlights aspects of Ibels’s work that match today’s media landscape. “It is a compilation of various media and then packaged as a ‘history,’” she says of Ibels’s illustrations of Dreyfus. “This idea that we can read clips of court trials, news, [and] gossip publications as history is very close to our contemporary understanding of media.”

One particularly compelling illustration in Ibels’s work was a response to a cover-page cartoon by Jean-Louis Forain for the anti-Dreyfusard journal, “Psst…!” The original drawing showed a Dreyfusard, or pro-Dreyfus, lawyer kicking an army captain’s hat. A second “Psst…!” image, which depicted then-French Prime Minister Henri Brisson lighting the fuse to a bomb (identified as “Revision”), added the text, “Allons-y!” The fusion of the text “Allons-y!” and Forain’s motif in Ibels’s work shows Hubert-Joseph Henry, the French lieutenant colonel who forged documents purporting to condemn Dreyfus, in military uniform punting not a cap, but the scales of justice.

“Dreyfusards saw Henry’s testimony as an example of military contempt for truth and justice,” writes Katz in the book, “so in this picture Ibels is both responding to Forain and lampooning Henry specifically as well as the army generally.”

Another chapter of Katz’s in the book examines a 1987 exhibit titled “The Dreyfus Affair: Art, Truth and Justice,” which Norman Kleeblatt, chief curator, mounted at the Jewish Museum in New York. (The 70,000 visitors the exhibit drew in its four-month run equaled the population of Jews in France during the Affair, Katz observes.) Although practitioners of every professional discipline were divided over the Dreyfus Affair, none were more fascinating to examine in an exhibit than artists, Kleeblatt observed in his introduction to the exhibit catalog.

“It is still unsettling to realize to realize that it was the Dreyfus Affair that caused the break between the two important artists Degas and Pissarro, who had formerly been fast friends,” he wrote. “[W]e find two archetypical examples of a much broader phenomenon: Monet, Signac, Cassatt, and Vuillard sided with the Dreyfusards against the anti-Dreyfusards Renoir and Cézanne. And this is only the beginning of a lengthy list.” Nearly 30 years later, it is still unsettling to ponder Degas’s and Pissarro’s messy split.

With the benefit of those same three decades of hindsight, Katz studies the larger context surrounding the Jewish Museum exhibit, focusing on the ways that the movement on behalf of Soviet Jewry impacted the 1987 show.

“My father, who was very passionate about the plight of Soviet Jewry, took me to New York to see the show in high school as an object lesson in Jewish activism, and I ended up writing a dissertation on the topic,” Katz says. “It took another decade before I realized that the attitude of the representatives of the Jewish community and our 1980s mentality of Jewish activism did not necessarily connect.”