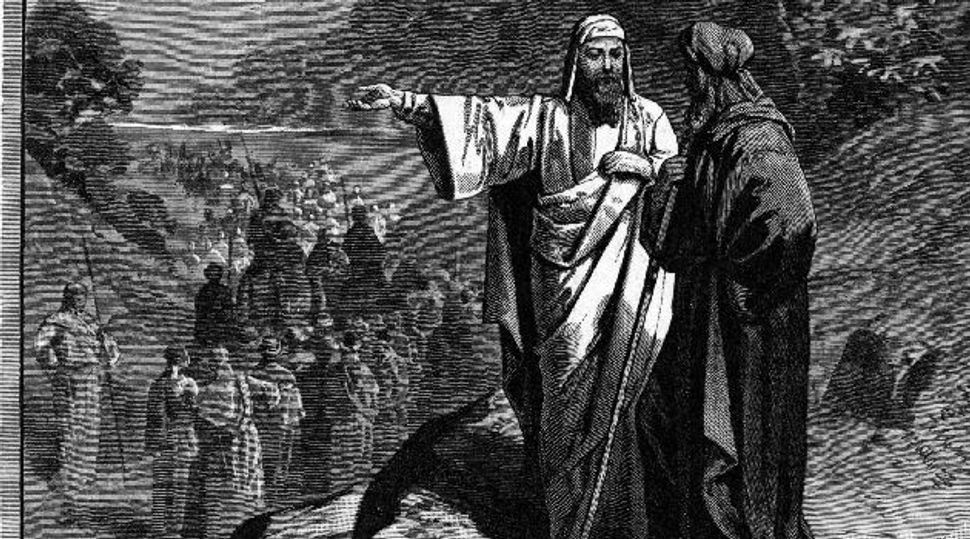 A Land Divided: Abraham and Lot divide the land and, in some way, begin to invent the concept of taxation. Image by Getty Images

Like it or not — and who among us actually likes it — come April 15, you will need to have filed your 2013 income tax return with the Internal Revenue Service. Perhaps one way to feel better about the painful and often inconvenient process is to recognize that it has roots in the biblical concept of tithing. Tithing was something like the original flat tax, meant to redistribute wealth in a more equitable fashion, from each according to his means, to each according to his needs — or, as it says in Deuteronomy 16:17, “Everyone according to what he can give according to the blessing that God gives you.”

Tithing is first mentioned in Genesis 14:17-20, when Abraham, having returned triumphant from battle against a bunch of kings who had kidnapped his nephew Lot and taken him to Damascus, was given a “a tenth of everything” by the king of Salem in recompense. Abraham’s grandson, Jacob, picked up the tradition, dedicating a “full tenth” of what God had provided to him for “God’s house,” the precursor to the Temple.

Later on, as the Jewish people began to form social, political and religious structures, Moses set up a more detailed program of tithing in support of the Levites, the priestly class, as a way of funding the sacrificial system linked to the agricultural economy that was the engine of ancient Israel. The Levites were to receive one-tenth of all produce, flocks and cattle. God chimed in on this, stating with emphasis: “To the sons of Levi I have given every tithe in Israel a heritage in exchange for the service that they perform.” And anticipating some of the more inscrutable rules of the IRS tax code, the Lord — whom you would think has anything He could possibly want or need, or the means to get it — made it obligatory that the Levites themselves pass along a tenth of their tithe received from the children of Israel to God Himself. Eventually, the beneficiaries of the tithes were expanded beyond the Levites to include orphans, widows, and proselytes, setting up a system foreshadowing our contemporary welfare state.

The prophets and the authors of the Talmud have a field day (pun intended) with the matter of tithes, scolding those who would seek to avoid paying their fair share of taxes (although not necessarily through dubious deductions for business expenses or via overseas bank accounts — in Babylon, for example, beyond the reach of the IRS of ancient Israel). The prophet Malachi comes across as a veritable IRS auditor when he says, “Since the days of your forefathers you have veered away from my laws and you have not observed them… Should a person steal from God, as you steal from me? And you say, ‘How have we stolen from you?’ [By withholding] the tithes and the terumah offerings!” Withholding income, of course, is one of the key tools of tax preparers and the IRS. Apparently the populace in Malachi’s time included a sizable contingent of tax resisters.

The federal income tax in the United States was first levied by the Revenue Act of 1861, to help fund the Civil War. After various repeals, reinstatements and constitutional challenges to the tax, the 16th Amendment was finally ratified in 1913, giving Congress the legal authority to tax all incomes, as well as providing a new source of government funding and a potential tool for redistributing income and social engineering.

In case one is intent on doing everything he can to avoid paying taxes, keep in mind that the Talmud is unequivocal about the obligation to obey the law and pay taxes. As Rabbi Shmuly Yanklowitz writes in the Jewish Journal, “The principle of dina d’malchuta dina explicitly includes tax money (Bava Kamma 113a, Hilchot Malveh ve-Loveh 27:1), and tax evasion is prohibited by Jewish law (Hilchot Gezelah ve-Avedah 5:11). As tax evasion is also a felony according to secular law, and evokes harsh criticism from the public, Jewish law also describes it as a chillul Hashem (desecration of G-d’s Name).”

But just because you pay your full share of taxes, don’t think you’re off the hook for the mitzvah of tzedakah. Contemporary sages make a distinction between one’s obligation to the “king” and one’s duty of tzedakah. Consult a tax professional or a rabbi — or, preferably, a tax professional who is a rabbi — as to whether or not tzedakah should count as a deduction against taxable income.

As for me, the only thing I am going to file by April 15 is an application for an extension.

Seth Rogovoy, the son of a certified public accountant, has never done his own taxes. He has, however, explored the Jewish affinities of the Super Bowl halftime show, the pop star Cher and J.R.R. Tolkien’s “The Hobbit” in the Forward.