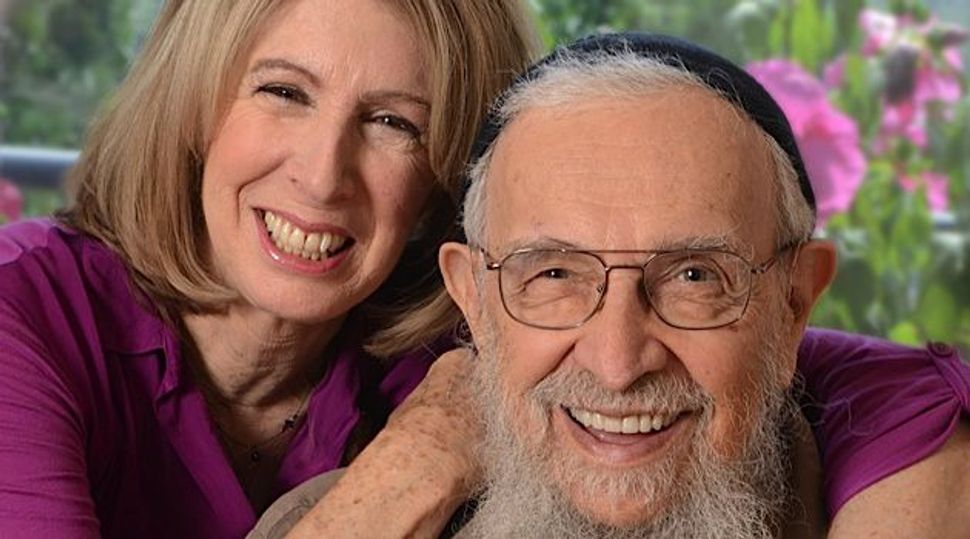 Founded in the aftermath of the Sabbatean heresy, early Hasidism was a paragon of paradox. Its early 19th-century adherents, particularly those of the philosophically rigorous movement Chabad, were uniters of opposites — heaven and earth, being and nothingness, concealment and revelation. The greatest revelations were often those most hidden — even hidden in plain view.

How else to describe this most revelatory of Rabbi Zalman Schachter-Shalomi’s many books — a volume whose cover does not bear his name, and which gives but the barest hints of what lies inside? It’s almost as if Reb Zalman, perhaps the most creative shoot of Chabad’s hasidic tree, doesn’t want this quasi-autobiography to even be about him.

And yet the format of “The December Project” — which mostly consists of extended conversations between Reb Zalman and the book’s author, veteran journalist and television writer Sara Davidson — is actually the best rendering of Reb Zalman’s wisdom that I’ve come across. At age 89, he has finally found his voice.

There are two primary reasons why this is so. First, reading Reb Zalman’s books has often been like listening to a Grateful Dead studio album. The genius is there, but the spark sometimes isn’t. The cadences, the digressions — Davidson renders these perfectly, editing just enough so that they aren’t tiresome or cute, letting Reb Zalman’s idiosyncratic voice resonate clearly.

Second, Davidson is the right interlocutor. Reb Zalman’s hasidim — both his immediate followers in the Jewish Renewal movement, and the wider circles of Jews who have been influenced by him — can often seem like, well, followers. All of us who know Reb Zalman personally — and I am honored to say that, in some small way, I am one of that community — know that he is actually quite down-to-earth, and quite open about his flaws and shortcomings. He doesn’t pretend to be a saint.

Yet much of what has been written about Reb Zalman has an air of hagiography. Thankfully, this book strips all that away.

On its face, “The December Project” is about death. December here refers to the December years, which Reb Zalman says he is in. (May he live, healthily, to 120. Although I’m not sure that he’d want to.) Unlike Reb Zalman’s previous book on the subject of eldering — 1995’s “From Age-ing to Sage-Ing,” co-authored with Ronald S. Miller — this book is not about growing old gracefully, but being old, gracefully or not. The book is remarkably frank on the frailty of the body and the descent of the mind. It pulls no punches.

But Davidson — credited as the sole author of the book — also had the good sense to leave in Reb Zalman’s many digressions and reminiscences, and so “The December Project” is also a sort of memoir. Reb Zalman has told his story in fragments before, but this is its most concise and moving rendition. Here are the years before he was famous: harrowing accounts of survival in World War II, stories of Reb Zalman’s life as a pious Chabad Hasid, celebrity encounters (LSD with Timothy Leary!), and more.

Davidson also brings herself into the narrative, along with her doubts and limitations. There’s a risk in doing so; I’m thinking here of “Julie and Julia,” which juxtaposes the iconic Julia Child with young writer Julie Powell, who pales by comparison — particularly in the film version of the book But Davidson pulls it off. While some of her ruminations, particularly later in the book, are a little pat and “Eat Pray Love”-style, by and large she is the perfect conversation partner for Reb Zalman. When the aged rabbi talks about the afterlife, she doesn’t believe him. When he invites Davidson to open her heart, she pushes back.

This is perfect. Too many “spiritual” books are either written by the guru himself, or recorded by a devotee who doesn’t question enough. Davidson is not Reb Zalman’s foil, exactly, but she’s not his groupie either.

There are really three books here: Reb Zalman on the December years, his recollection of his life, and Davidson’s own journey. Each has its rewards.

On the subject of old age, Reb Zalman’s approach seems to be one of honesty, acquiescence and continued effort. “I’m talking about this because I want people to see it’s not all pleasant stuff in December,” he says at one point. He doesn’t push the body too much, and struggles to “dissociate” from it. He’s at peace with death, but not with suffering and dying. He sympathizes with those who seek to end their suffering by refusing to eat, though not by overdosing on medication. His practices for the December years involve forgiveness, letting go and kvetching — not exercise and vitamins.

And yet December also brings time for rest. The image one gets of Reb Zalman in “The December Project” is remarkably like the Reb Zalman I’ve visited at his home in Boulder. Much of the weight of leading a Jewish revolutionary movement now off his shoulders, he has time for baking challah, praying in his personal “chapel” (sadly, this was damaged in 2013’s floods, which took place after the writing of this book), and reflection.

Naturally, many of Reb Zalman’s reflections concern his own life, and it is likely that these recollections that will attract the most attention to this book. His war stories are as gripping as any, filled with close escapes and horrific incidents. And his tale of falling in and out of love with Chabad Hasidism is revelatory.

To many, Reb Zalman seems like the archetypal Hasid, albeit one who been “off the derech” for decades now. In fact, he was raised mostly secular in Vienna, and came to Hasidism in stages: Orthodox yeshiva, then learning Maimonides and then meeting Chabad. Like many present-day seekers, it wasn’t the theology as much as the personal connection that seems to have attracted him. Meeting the sixth Lubavitcher Rebbe at age 16, Reb Zalman says, “I felt that I had been fully seen — more than at any time in my life. And fully loved.”

When the rebbe died in 1950, Reb Zalman’s relationship to Chabad shifted. He was more of a colleague to the seventh Lubavitcher Rebbe (the man thousands of Chabadniks now consider to be the Messiah) than a disciple. And he bristled at being a shul rabbi in Rhode Island, or a shaliach (emissary) in the Canadian province of Manitoba.

Eventually, the ties frayed. Encounters with Thomas Merton and other spiritual luminaries helped loosen his bonds with normative Judaism. Experiments with alternate forms of Jewish prayer and meditation eventually gave birth to what is now Jewish Renewal. And by 1968, when Reb Zalman gave a notorious lecture, “Kabbalah and LSD,” his tether to the traditional Hasidic world was cut. “It was time,” Reb Zalman says.

Probably the most poignant of Reb Zalman’s remembrances is that of his first wife — with whom he entered an arranged marriage when he was 19 and she 22 — and how the marriage, which lasted 22 years, could not survive his gradual alienation from traditional hasidic life. This was not purely a life of adventuring; there were heavy costs to be paid for straying from the path.

The rest of the story is more familiar: heady days in the 1970s, with plenty of drugs and sex to go around, and more wanderings and innovations. (Perhaps because Reb Zalman is an octogenarian now, “The December Project” is his most frank disclosure of the “free love” ethos that prevailed at that time.)

And then there’s Davidson’s own story. Courageously, Davidson discloses her own struggles with anxiety and depression. Her tales of danger in Afghanistan and grief at the death of her mother are well-rendered, and enable “The December Project” to constitute an authentic encounter between two very different vectors of living. Eventually, Davidson does come around to trust her intuition— she practices letting go and other spiritual basics. But the more persuasive transformation seems to have come simply from being in the elder sage’s presence — and seeing that there’s a real person behind the “sage.” Thanks to “The December Project,” we can taste some of that presence ourselves.

Jay Michaelson is a contributing editor of the Forward. His most recent book is “Evolving Dharma.”