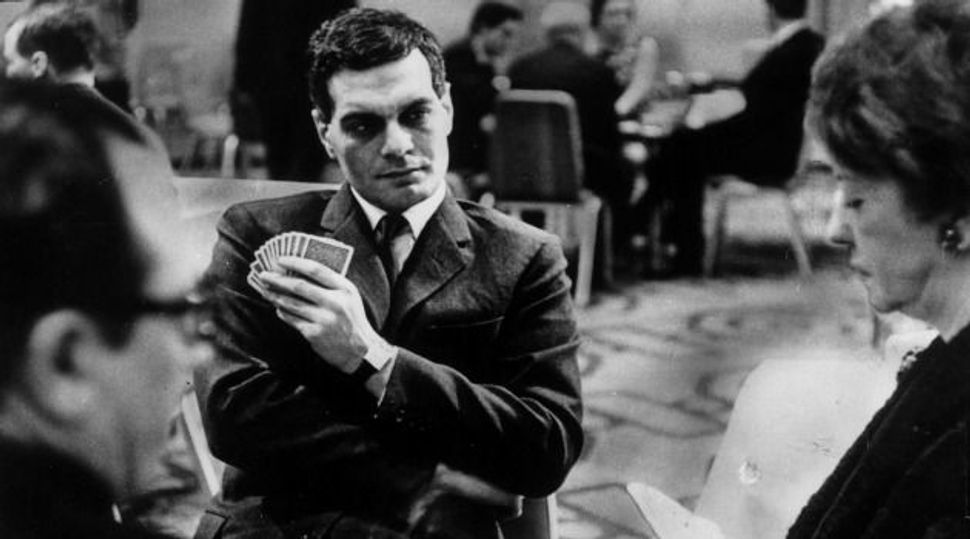 Not Playing: Academy Award nominated actor Omar Sharif, best known for roles in ‘Funny Girl’ and ‘Doctor Zhivago,’ said though he would personally play against Israelis at the World Bridge Olympics in 1963, he was told not to by Arab leaders. Seen here at the competition in 1966. Image by Getty Images

Reports from Russia reveal that the Jews of Kiev are under renewed attack. An official administrative order announced that 580 Jewish families must leave the city immediately. The order was issued in the wake of revelations that a large of number of Jewish families had obtained residence permits to live in Kiev, thanks to the fact that the daughters of each family attended one of three private girls high schools. A number of influential Christians petitioned the government, asking that the Jews be allowed to remain, but the request was denied. Additionally, a delegation of Christian citizens approached Governor-General Pyotr Lavrentyevic Sukovkin, demanding that he do something to prevent the expulsion of the 580 Jewish families, because, after all, their Christian landlords will suffer.

Terrible stories of violent pogroms against Slovakia’s Jews are leaking out of the area. Under attack by the Nazi-affiliated Hlinka Guard, the country’s Jews are hiding behind closed doors, fearing that if they leave their homes, they will be brutally attacked. German-speaking residents of Slovakia, together with the Hlinka pogromists, have been attacking Jews in the streets and plundering Jewish stores and property. In St. George, for example, Slovak hooligans forced Jews to damage their own synagogue and, after cutting off his beard, forced the rabbi to tear up the Torah. The town’s Jews were also forced to crawl on the streets and wash the sidewalks. Similar abuses of Jews have taken place throughout Slovakia. In many towns, the Jewish populations have simply left, and many Jews, unable to handle the attacks, have committed suicide.

The World Bridge Olympic, which opened recently in New York’s American Hotel, was immediately plunged into scandal when players from Egypt and Lebanon refused to participate in a match with a player from Israel. The leader of the Egyptian team, Academy Award nominated actor Omar Sharif, said that though he is personally prepared to play bridge against an Israeli opponent, the order was given from on high that the Arabs were not to sit at the tables with Israelis. The French head of the World Bridge Federation demanded that the order be repealed. On the other hand, if the Arabs refuse to play them, the Israelis will win by default.