‘Ida’ Revisits Poland in the Shadow of the Holocaust 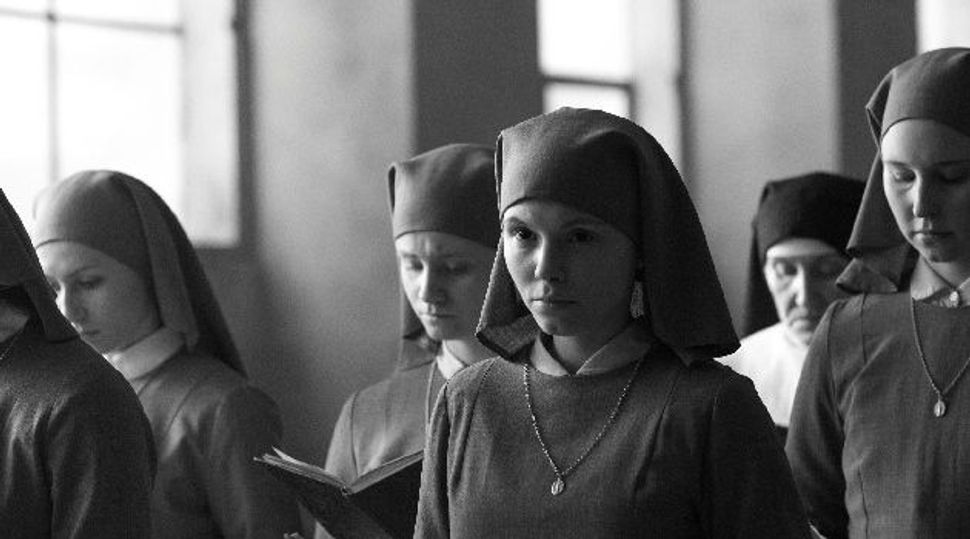 And Then There Were Nuns: Agata Trzebuchowska plays the title character in ‘Ida.’ Image by Getty Images

Pawel Pawlikowski left Poland at the age of 14, but his childhood memories of his homeland never left him. It’s no surprise then that “Ida,” a stunning portrait of two very different women whose lives intersect in 1960s Poland, is the director’s most assured and confident narrative feature yet. The film takes place in the moment in Polish history at which the nation was emerging both from the shadow of the Holocaust and, temporarily, from the iron fist of communist rule. Pawlikowski sat down with Sheerly Avni and spoke about his particular exasperation with contemporary cinema, his attempt to make a film that would be both a meditation and a prayer, and the perils of plunging into the “minefield” of his nation’s contested political history.

Sheerly Avni: Your two central protagonists are Ida, a young nun who discovers right before she is set to take her vows that she is Jewish, and her Aunt Wanda, a former communist judge with more than a few skeletons in her closet. On the surface, these two women seem as opposite as can be, yet there are also moments in the film in which it seems that they are the only two people in the world who understand each other.

Pawel Pawlikowski: But it’s a kind of love story, you know, between these two women, and a moment of grace.

You have a very interesting character in Wanda. She suffered terrible losses during the Holocaust and she was a devout Stalinist. Wanda is a product of these two cataclysmic moments in history, but she is definitely not a victim.

Wanda was a political beast. Like a lot of young people, Jewish and not Jewish, after the war, she was an idealist, and she went for Marxism and Leninism. Nowadays the accepted discourse in Poland is to deny this, but at the time, a lot of intellectuals were very taken with communism, which promised an exciting new narrative and new way of restructuring a world which had compromised itself. And then when Wanda got into this Stalinist system, she became a dangerous fanatic. She has blood on her hands.

Then there’s Ida, this young nun who has no knowledge of the outside world, yet who somehow seems much stronger than Wanda.

Some people who have seen the film really resent some of Ida’s decisions. But Ida is not psychologically or sociologically average, she has this transcendental streak. I know such people, they exist, and yes she is a good contrast to a person like Wanda, who is more like the rest of us. But both these women want more than the world has given them. And they are paradoxical. In a character, in a nation, everything carries its paradoxes and is irreducible to one generalization. And the ’60s were a paradoxical time.

Here you had the trauma of the war, and the trauma of Stalinism, but at the same time you have people who suddenly want to live. There was a slight opening there — and Poland was the most liberal country in the communist bloc. So suddenly there was music, there was pop culture.

And handsome cool jazz musicians who could appreciate the beauty of a young nun.

Exactly. Even people like Wanda, the Stalinist state prosecutor, suddenly felt the urge to dance, to let their hair down. There was a certain style about the country which has gone missing, since the ’70s anyway. The look of the film was very much influenced by childhood memories of Poland, and from all these really great photos of my parents. They were very glamorous, and I think it was a “cool” time. I tried to capture that in the film.

What is the distinction for you, between photographic and cinematographic?

Much of our approach was a direct result of my general impatience with cinema. I’m totally bored with cinematic tricks — you know, tracking shots for no reason, close-ups, emoting, music that tells you what to feel, for example this whole idea of using handheld in order to convey authenticity or emotion. We just composed shots and let the action unfold within those shots. I wanted “Ida” to be a kind of contemplation, meditation, maybe even a prayer.

There are moments when one has the sense that, if there is a God, he has certainly abandoned his creatures. The camera tilts upwards through much of the film’s exterior shots, leaving your characters almost abandoned in an empty sky.

On the other hand, there’s a lot of space for God up in that sky!

Making a film that is even tangentially related to the Holocaust is often a tricky artistic and commercial tightrope. And both your protagonists make choices that might be troubling for Jewish audiences.

This is partly why in the past I have tried to avoid history — it’s a minefield, because when you step into a historical context you always lose, or you end up making a film that tries to explain itself. Your characters become illustrative of a thesis. I tried to avoid making a film that is explanatory, a settling of accounts, like a film about the Holocaust, or about Polish guilt. I tried instead to make a film about these two very specific characters, in a landscape which was very specific in that moment, and hopefully deal with something that is a bit more atemporal. I was more concerned with faith than with religion per se. What is faith? Is it something you imagine, is it a tribal denomination, or is it something truly transcendental?

Have you bumped into audience members who view the film through a more political lens?

Absolutely. For example, [the director] Agnieszka Holland told me, “They can’t accept what Poland is in that period and what it has to offer them.” But I think perhaps they just cannot accept the world as it is. I’m more with Chekhov on this. I think the world is a disappointing place. But what I like about film in general is that it can take you on a journey. Not a journey based on a set of mechanical plot points, but rather a journey in which you create a space for a certain kind of magic. You come out on the other side feeling strangely moved. And that is what I hope has happened for some audiences here. In the end of course, I just made the movie I would most want to watch, in the hopes that others will want to watch it as well.

‘Ida’ Revisits Poland in the Shadow of the Holocaust