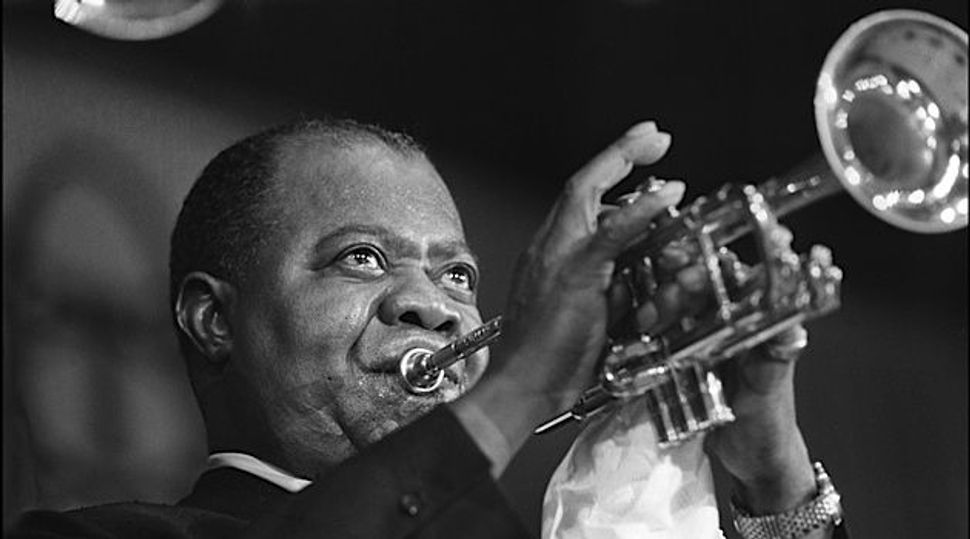 A massive, and massively detailed new biography, reminds music mavens that jazz pioneer Louis Armstrong assimilated lessons from Judaism and expressed them through music and writing during his long career.

“Louis Armstrong, Master of Modernism” by Thomas Brothers is a tribute to an unsurpassed jazz trumpeter and singer who relished Yiddishkeit. Born in 1901, Armstrong performed and recorded nearly until his death in 1971. Grateful early on for the respect, encouragement and affection he received as a boy from the Karnofskys, a Lithuanian Jewish family in his hometown of New Orleans, he later became dependent for decades on his manager Joe Glaser, a Jew with mob ties. Toward the end of his life, he repeatedly jotted down thanks to Jewish doctors who prolonged his career. At home, Armstrong snacked on matzoh as a preferred treat and wore a Star of David (accounts differ over whether it was given to him by the Karnofskys or by Glaser). The jazz photographer Herb Snitzer, who captured an image of Armstrong on a bus in 1960 with the Star of David clearly visible, commented: “[Armstrong] wore the Star his entire life.”

Brothers, a Duke University musicologist, offers up captivating details about Armstrong, who was very vocal about his overindulgence in marijuana, laxatives and extra-marital affairs. More than any previous biographer, Brothers lets us get to know Armstrong warts and all, rather than glossing over, for example, his relationship with Al Capone at the start of his career. A magnificent researcher, Brothers previously published “Louis Armstrong, In His Own Words: Selected Writings,” a key volume that includes the text “Louis Armstrong + the Jewish Family in New Orleans, La., the Year of 1907.” Penned from Beth Israel Hospital in 1969, itis dedicated to Glaser, “The best Friend/That I’ve ever had/May the Lord Bless Him/Watch over him always” from “His boy + disciple who loved him dearly.” (The off-Broadway play “Satchmo at the Waldorf,” currently running at the Westside Theater Upstairs, depicts Armstrong and Glaser as having a more fraught relationship.) “Louis Armstrong + the Jewish Family” also praises a physician at Beth Israel: “Dr. Gary Zucker M.D. (my doctor—He saved my Life at the Beth Israel Hospital, N.Y. Dr. Zucker took me out of Intensive care “Twice. Yea.)”

Dr. Zucker inspired Armstrong by singing a Russian Jewish lullaby that the latter had heard from the Karnofsky family decades ago. This inspired a vehement series of declarations of love for the Jewish people in which he expressed disappointment that the African-American community had failed to mobilize for Jewish causes:

“I had a long time admiration for the Jewish People. Especially with their long time of courage, taking So Much Abuse for so long. I was only Seven years old but I could easily see the ungodly treatment that the White Folks were handing the poor Jewish family whom I worked for. It dawned on me, how drastically. Even ‘my race’ the Negroes, the way that I saw it, they were having a little better Break than the Jewish people, with jobs a plenty around… to me we were better off than the Jewish people. But we didn’t do anything about it. We were lazy and still are.”

Compassionate toward poverty and other forms of suffering, and identified with the African-American struggle against oppression, in his writings, Armstrong used Jewish courage and resolve in the face of oppression as a goad to inspire African Americans. A great musician who was both a product of African-American heritage and influenced by Jewish tradition, Armstrong used his music as a platform to express tough love to his community.

Over the years, Armstrong sang song after song that celebrated Jewish determination. One such tribute was the 1930s song “Shadrach,” which he sang in a 1951 Mickey Rooney film “The Strip” and on his 1958 album “Louis and the Good Book.” The song recounts the story from the Book of Daniel in which three Israelites refused to pray to Babylonian idols: “But the children of Israel would not bow down… you couldn’t fool me with your golden idol!” Armstrong croaked with gritty glee.

Armstrong offered even more Old Testament didacticism in other songs on the “Good Book” album including “Ezekiel Saw de Wheel,” “Jonah and the Whale,” and “Cain and Abel.” The last-mentioned proclaims: “Don’t lament, be content,/ Don’t resent what the Lord has sent,/ And you’ll find that you’re bound to get along.” Although written by others, Armstrong infused these songs with his own vision: In the spiritual “Go Down, Moses,” for example, he implied that when singing about “when Israel was in Egypt’s land,” he was referring to the history of Jews as well as to bigotry against present-day African-Americans.

Decades earlier, Armstrong had appeared in “I’ll Be Glad When You’re Dead, You Rascal You,” a 1932 comedy short by the New York-born Jewish director Dave Fleischer. Starring Betty Boop, the film features the disembodied head of Armstrong chasing two animated characters (Koko the Clown and Bimbo); at a key moment in the chase, a speedometer attached to Koko’s tail registers “kosher” in Hebrew letters. This inside joke was likely the brainchild of Fleischer, yet Armstrong’s singing head juxtaposed with Hebrew letters is suggestive of the amalgamation of black and Jewish culture that Armstrong embodied.

Even before 1932, Armstrong had made his mark with galvanizing trumpet playing and enchanting vocals featuring joyous scat singing that he helped popularize as a jazz idiom, although he did not invent it. As practiced by Armstrong, the wordless syllables freed the singer from the discipline of memorized text and allowed for exuberant improvisation, recalling the tradition of nigunim in Jewish music. Although the nigun’s melodies may be mournful as well as ecstatic, Armstrong’s scat singing was almost exclusively joyful and triumphant, self-aware of its own comedy.

The possible nigun-scat parallel was seen as a literal connection by Armstrong’s friend, publicist Phoebe Jacobs (born Pincus; 1918-2012). In Laurence Bergreen’s 1997 biography “Louis Armstrong: An Extravagant Life,” she explains that she heard Armstrong tell Cab Calloway that he derived his scat singing style “from the Jews ‘rockin,’ [by which] he meant davening.” Jacobs added: “Louis never talked about this in public, because he feared people would assume he was making fun of Jews praying, which wasn’t his intention at all.”

Whether or not Armstrong was serious in making this statement to Calloway, another gifted jester, is moot, but the remark further affirms the centrality of Jewish culture to Armstrong’s world. “‘For Posterity’: The Private Audio Recordings of Louis Armstrong,” an article by Ben Alexander in an American Archivist from 2008, describes how Armstrong taped his daily activities, favorite recordings, and comments from family and visitors. One surviving reel contains performances by the African-American jazz pianist Art Tatum as well as by Eddie Cantor. Born Edward Israel Iskowitz in 1892, Cantor sings “Over Somebody Else’s Shoulder,” an ode to sexual infidelity in which the singer admits falling in love with one girl while dancing with another. Admiringly including Cantor alongside Tatum, which few jazz historians would do, Armstrong showed typical broadmindedness toward music. Despite the flaws detailed in “Louis Armstrong, Master of Modernism,” this is the jazzman’s lasting legacy.