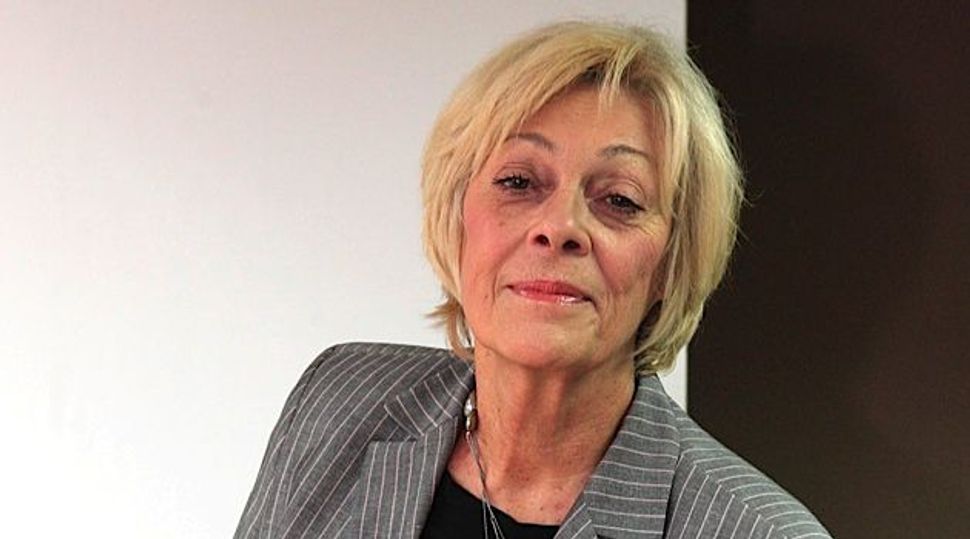 War and War and Peace: Daša Drndić is the author of “Trieste”, which is now available in an English translation. Image by Courtesy of Daša Drndić

In Gorizia, near Trieste, near Italy’s border with Slovenia, an 83-year-old woman named Haya Tedeschi has been waiting 62 years — since 1944 — for the return of her abducted little boy, Antonio. For years she has been collecting shards of the history that surrounds her life story — writing notes, collecting old, cracked photos and news clippings, rearranging them “as if shuffling a pack of cards.” The promise of this grave, staggering book by the Croatian writer Daša Drndić is that we will eventually get to the bottom of a mystery. We will find out not only what became of Tedeschi’s son but why, as his mother awaits him, she remains “wildly calm.”

“Her story is a small one,” Drndić writes, but a necessary one, for Tedeschi, a mathematics teacher, knows that if she succeeds in “sweeping away the underbrush of her memory,” her testimony will take its place in “a vast cosmic patchwork,” and some truth might emerge about the grotesquely unnerving history she’s lived through.

Tedeschi’s forebears were citizens of the republic of displacement. They spoke Italian, German and Slovenian. Their saga begins long before 1944, in the southern reaches of the Austro-Hungarian Empire, where Archduke Franz Ferdinand pays a visit not long before heading for Sarajevo in 1914. From there, the saga bulges out in many directions, heading forward, backward and sideways, folding back upon itself more than once, swelling into a boundless weave of facts and inventions, so that everything in Tedeschi’s story touches a million other stories in a delirium through which a historical sequence pokes out, like bones.

First published in Croatian in 2007, “Trieste” is a darkly hypnotic kaleidoscope of a book about characters suffering from a lethal case of history, who barely catch their breath before they are thrown off-balance again, displaced, bent, crushed and buried; it is about those who did evil and survived, some of them with impunity. To tell a story commensurate with the vastness of Nazi evil, Drndić combines historical, archival fragments with excerpts of memoirs, with poetry (including works by T. S. Eliot, Ezra Pound, Jorge Luis Borges, Eugenio Montale), with anecdotes about historical persons, with photographs, with lists of transports and shreds of historical events, with transcripts of testimony given in Nuremberg. She lists the names of 9,000 murdered Italian Jews. Through such means she recreates the dizziness of history.

The reader, gripped by vertigo, will frequently wonder what here is unearthed and what is invented. But this vertigo has the objective of serving truth. For in the age of Google, it is easy to ascertain that, for example, a certain building in Trieste that Drndić describes still stands — a former rice-processing factory called the Risiera di San Sabba, the site of a Nazi concentration camp that functioned both to transfer Jews to Auschwitz, and to conduct exterminations. It is also easy to ascertain that an SS man named Kurt Franz was posted to Trieste in the fall of 1943. “Trieste” contains photos of him.

In Drndić’s telling, the fictional baby Antonio Tedeschi was born of his mother’s affair with the actual Franz. Before being assigned to Trieste in 1943, the not-at-all fictional Franz was a top commander at Treblinka, in occupied Poland. There, in the course of 15 months, he and his apparatus murdered about a million Jews. After the war, he served 28 years in prison.

Reader, if you want to avoid a spoiler, skip this paragraph: The son of Tedeschi and Franz, it will turn out, was abducted into a Nazi program called Lebensborn — an actual program established by Heinrich Himmler in 1935, though not intended for the children of Jewish mothers. Some 20,000 sufficiently Aryan-looking babies of various origins were raised in Lebensborn homes in Germany and Norway, and then dispersed through “orphanages” to loyal German homes to grow into exemplary specimens of the master race. One of the Lebensborn children grew up to become a member in the Swedish singing group Abba. This happened.

Drndić’s Hans Traube, né Antonio Tedeschi, says of adults who began life under Lebensborn: “We are a lot unto ourselves, an ilk that has unhooked itself from Earth and now wanders through space.” According to Drndić, the “graduates” of Lebensborn resemble the actual children of some actual Nazi leaders, dazed, stained penitents who “wash themselves any way they know, heal themselves as best they can, find straits through which they navigate quietly, on tiptoe, to avoid, at all costs, meeting themselves.” As, one way or another, all Jews navigate through their own remains.

So it happens that Traube, having learned he is not who he was told he is, wandered through Europe in search of his actual mother. “I have arranged a multitude of lives,” Drndić writes in his voice, “a pile of the past, into an inscrutable, incoherent series of occurrences. I have spent eight years probing these lives, these pasts, at the same time drilling into myself. I have dug up all the graves of imagination and longing I have come to. I have rummaged through a stored series of certainties without finding a trace of logic.”

After decades of publications and documentary work about victims of the Holocaust, readers are accustomed — but, one may hope, never inured — to stories of Nazi barbarism, drawn from the records and reflections left by witnesses, actual and fictional ones, from writings that take this form: “Here is what happened to me. This is what it looked like, smelled like, felt like when human beings did this to me and to others. I saw them do this and that to others. I did this, I did that, I saw, I felt, I thought…” So too, for more than half a century now, have clear accounts like André Schwarz-Bart’s “The Last of the Just” and Elie Wiesel’s “Night” demanded, and received, much-deserved attention and empathy.

Such accounts continue to appear, along with historical records from which biographies and histories draw upon, so much so that Drndić has found it possible to do something different within the covers of a book: to strive to evoke a sense of the totality of what happened. An absurd ambition, of course. By definition, impossible. For a novel tells of singular persons, does it not? Do we not learn at an early age that it is personal stories that matter?

Still, might it be that to evoke an experience by the carload, so to speak, is an impossibility worth striving toward? Drndić thinks so. She takes the risk of composing a cubist work that keeps spilling out of its fictional frame. Every incident takes place amid a welter of documentable forces. All escapes are provisional, all actions contingent on what happens offstage. Everyone lives within a vast and unfathomable crime. It is too much to get one’s mind around. But, Drndić is saying, if it cannot be comprehended, it can at least be stared at. So the ensemble of “Trieste” makes up a jagged, unending Möbius strip of the incomprehensible. The whole pays homage to a phantasmagorical history — one that happened. The whole corresponds — unbearably — to the vast scale of the awfulness.

And yet it is not the least part of Drndić’s achievement, in a smashing translation from the Croatian by Ellen Elias-Bursac, that it rewards the reader with a very high order of lyrical writing that seems to originate from the interior of consciousness: “The train glides along, lit from the inside and nearly empty. I move through the black silence, through the fragrance of summer, through a silence which envelops itself, which pours slowly and lazily across the earth and sky, everywhere around us.” Drndić’s characters are not only pushed around by immense forces, but also have their eyes and hearts open. In the spirit of, say, “Mrs. Dalloway,” “Trieste” is a tale of inner lives embroiled with other inner lives, as if a single tangled organism were the true protagonist.

There is another inevitable comparison to be made, and it is deservedly flattering to Drndić. Ever since Leo Tolstoy inserted speeches and letters by Napoleon, Czar Alexander I, and General Mikhail Kutuzov into his beyond-great “War and Peace,” writers have hunted for ways to tell something of history by placing bounded stories that concern hypothetical individuals within more extended, elaborate stories populated by historical personages who walked the earth, leaving verifiable imprints on imagined realities. As her characters collide with actuality, Drndić has in her own way composed an astonishment that extracts light from darkness.

Todd Gitlin, professor of journalism and sociology at Columbia, is the author of 15 books, including 3 novels, of which the most recent is “Undying” (Counterpoint, 2011).