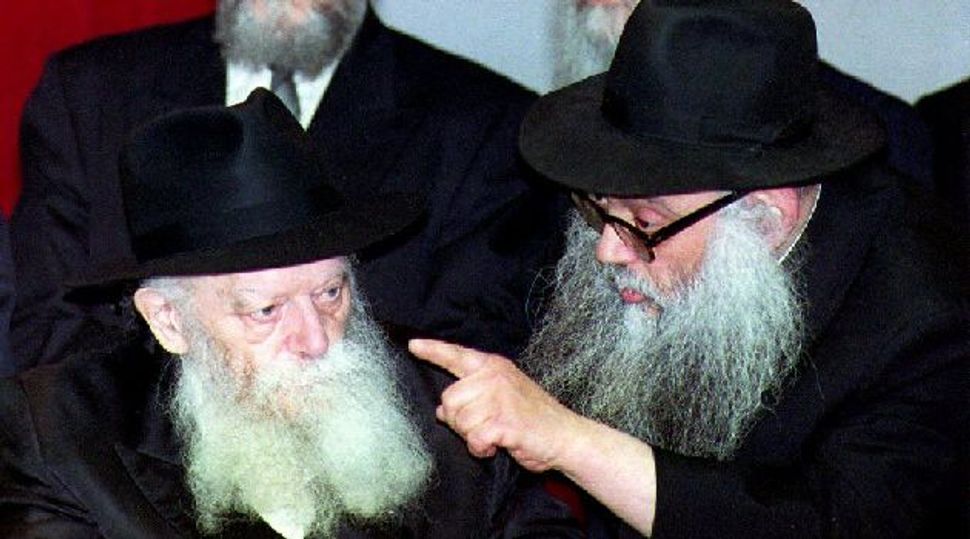 Rebbe: The Life and Teachings of Menachem M. Schneerson, the Most Influential Rabbi in Modern History
By Joseph Telushkin
HarperWave, 640 pages, $29.99
My Rebbe
By Adin Even-Israel Steinsaltz
Maggid, 250 pages, $24.95

At the end of time, when climate change or an asteroid or the Messiah’s arrival has rendered moot Pharrell Williams, the Affordable Care Act, “Game of Thrones,” Rand Paul, the designated-hitter rule, Vladimir Putin on horseback, and Chipotle’s cilantro-lime rice, there will be two kinds of religious people left on earth: Mormons and Lubavitcher Jews.

There could be some Muslims, and perhaps a Roman Catholic looking for a Latin Mass. Some Pentecostal will be laying hands on somebody, somewhere. And surely there will be plenty of eccentric spiritual individualists, making their own paths or journeys — which they will, have no doubt, refer to as “paths” or “journeys” — from a syncretistic mix of crystal-wearing, aromatherapy, chiropractics and the Tibetan Book of the Dead.

But if you are looking for stable religious communities, with continuity over time and a coherent set of traditions, you’ll find Latter-day Saints and Lubavitchers, as Jews of the hasidic sect Chabad are also called. They have a lot of children (the Lubavitchers more than the Mormons, but both groups have strong rates of natural increase); they are good at converting others; and, even when they do not convert others, they are very good at converting among themselves.

Mormon men, and many Mormon women, take two years off in the middle of college to go on “missions,” often to foreign lands. During those two years, they may not save any souls for Mormonism. But in knocking on doors and leafleting daily for two years, they at the very least grow more committed to the message they are bringing. How could they not?

Lubavitchers are sent into the street as 13- or 14-year-olds to ask passersby, “Are you Jewish?” For those who say yes, they offer to help put on tefillin, the little wearable black boxes containing prayers, or, depending on the season, give them matzos or Hanukkah menorahs. They, too, may not convince others to become observant, but they are always solidifying their own observance.

But as we know, Chabad is, in fact, quite good at persuading some Jews to become more observant. And the 4,000 or so shluchim, emissaries, who along with their wives and children have dispersed across the globe to do missionary work among lapsed Jews, or those in areas with little organized Jewish life, have also become necessary to hundreds of thousands of Jews’ religious lives. Their schools, summer camps, adult education classes, and weekly Shabbat dinners have fortified Jewish life, often in towns or countries where Jewish life had been left for toyt.

And the emissaries do it because the Rebbe told them to.

This season marks the 20th yahrzeit, or anniversary of the death, of Menachem Mendel Schneerson, the seventh Lubavitcher rebbe, and the one everyone — not just Lubavitchers — means when they say “the Rebbe.” He died on the 3rd of Tammuz in 1994, which this year corresponds to July 1. And although his father-in-law, his predecessor as head of the Lubavitcher movement, began sending emissaries to help small or failing Jewish communities, this work of outreach was codified and amplified by the Rebbe, who assumed leadership of the movement in 1951. Today, hundreds of cities, and many countries, have but one rabbi, and often that rabbi has been sent there by Chabad. Thus have Lubavitchers become the Mormons of Judaism.

And yet we know nearly nothing of the Rebbe, whose organizational talent is largely responsible for keeping Judaism a worldwide religion (as well as keeping Judaism somewhat vibrant in pockets of communist countries, like those of the former Soviet Union). Two new books, by eminent writers who knew the Rebbe well, promise to bring us closer to the man who wanted to bring us closer to Judaism.

These books promise, but do they deliver? As with a Jew walking into a Chabad house, your level of satisfaction depends on what you’re looking for.

Neither “Rebbe,” by best-selling “Jewish Literacy” author Joseph Telushkin, nor “My Rebbe,” by the Talmud translator Adin Steinsaltz, is a traditional, chronological biography. Both authors divide their book into thematic chapters, approaching this mountain of a man first from one face, then from another. Both authors devote a chapter or a substantial section to the Rebbe’s famous “dollars,” the face-to-face meetings where he would dispense blessings to anyone who came, along with dollar bills intended for charity. Both authors discuss the Rebbe’s theological anti-Zionism, which he married to an intense love for the people who — disagreeing with him — had settled and lived in Israel. After considering the claims of those who believed the Rebbe to be the actual Messiah, both authors dismiss the notion, and exonerate the Rebbe from encouraging such speculation.

These are hagiographies. One can finish both Telushkin’s book, which is long, anecdote-rich and written in a comfy, American idiom, and Steinsaltz’s, which is shorter and stilted, without encountering a single flaw in the Rebbe. Steinsaltz is himself a Lubavitcher, while Telushkin does not identify as one. But it doesn’t take a Hindu to revere Gandhi.

“This is an admiring biography,” Telushkin writes, “but one that I hope has been written with open eyes.” I think that Telushkin did his best, but what can one say about a subject who, after accepting the job that he would hold for the last 40 years of his life, had no personal confidants except his wife (and she none besides him, at least none that have spoken up); never traveled outside his home state; and in millions of written and spoken words rarely spoke of himself or his own feelings? Although the Rebbe made his hawkish beliefs on Israeli defense policy known, he otherwise stayed out of politics, especially in the United States. He stayed in Crown Heights, Brooklyn, met with admirers, offered them blessings and cryptic bits of advice on personal matters that they brought to him, gave out dollars, and told his emissaries to go out and spread Judaism.

If the Rebbe had any personality outside his persona, either nobody saw it, or those who saw it don’t tell. Beholding the discretion of those around the Rebbe, one can only wonder that every pope should be so lucky.

So there’s really not much to say, if the goal is to bring us closer to the Rebbe. Telushkin, who seems to have read everything by or about every member of Chabad, and who has many personal friendships to draw on as well, offers a rounded portrait of life in the shadow, or the sunlight, of the Rebbe. We meet dozens of followers and hear their stories, get a feel for the texture of their devotion, for why they loved him.

The Rebbe insisted that girls as well as boys be featured on the cover of his Chabad youth magazine. The Rebbe hatched the idea of putting Hannukah menorahs on public lands, to announce a Jewish presence alongside the Christmas tree. And then there were the miracles attributed to the Rebbe, like the couples who conceived a child after asking, in desperation, for his blessing.

The Rebbe believed that every Jew, even one who had helped Stalin to murder other Jews, could be saved. “When you go back the next time,” the Rebbe said to a Jewish dignitary who was to have an audience with Lazar Kaganovich, “you should tell him he should still do teshuvah,” referring to repentance. “[H]e still has a chance.”

That belief that all Jews contain a spark of the divine undergirded his belief in kiruv, or outreach, at a time when most Orthodox Jews believed that less observant Jews were something like possible contaminants. Today, other Orthodox groups do outreach work, and even leaders of the Reform movement point, perhaps with a gulp, to the Chabad model.

Did we need 500 pages of this? Not when 300 would have done. But even at its present length, Telushkin’s book is a winning portrait — of the lover, not the beloved. If I had written this book, I would have been more scathing about many of the Rebbe’s teachings: how he discouraged his followers from going to secular university, for example, or his ruthless realpolitik with regard to the Palestinians. But seeing Telushkin’s ardent efforts to put the Rebbe in the best possible light, even when he has to overthrow his own better judgment, paradoxically makes me even more intrigued.

The Rebbe got a lot wrong, but he got religious charisma very right. In his book, Steinsaltz is usually the opposite of illuminating — “He was always polite and considerate,” he writes of the Rebbe, in a typical passage, “yet always spoke with authority.” But near the end, Steinsaltz gets to the hard heart of the Rebbe’s appeal, arguing that the Rebbe’s concentrated but strangely absent public self was a conscious choice. “The Rebbe once explained to me,” he writes, “that many individuals cannot commit to a cause based only on systematic thought and reasoned conclusions.” The Rebbe knew, according to Steinsaltz, that “rampant celebrity worship and the power of ‘brands’ characterize much of society,” so he “allowed himself to become a symbol, a tangible figure that appeals to the heart.”

Steinsaltz writes movingly of how lonely the Rebbe must have been in this remote posture. He was childless, and at the end of his life widowed, too. And after “[t]hose who had once been his peers, workmates and colleagues became his subordinates… he could no longer talk to them as equals.” Most people who become matinee idols for a cause maintain some private life, which inevitably becomes public: It wasn’t too many years before Gandhi’s sexual peccadilloes became as widely known as those of Martin Luther King or John F. Kennedy. Somebody like Ronald Reagan was reasonably remote, but even he had an ex-wife and an embittered daughter! The Rebbe was in a whole other league of social continence, which was good for his hasidim, and perhaps for world Jewry, but very bad for his biographers.