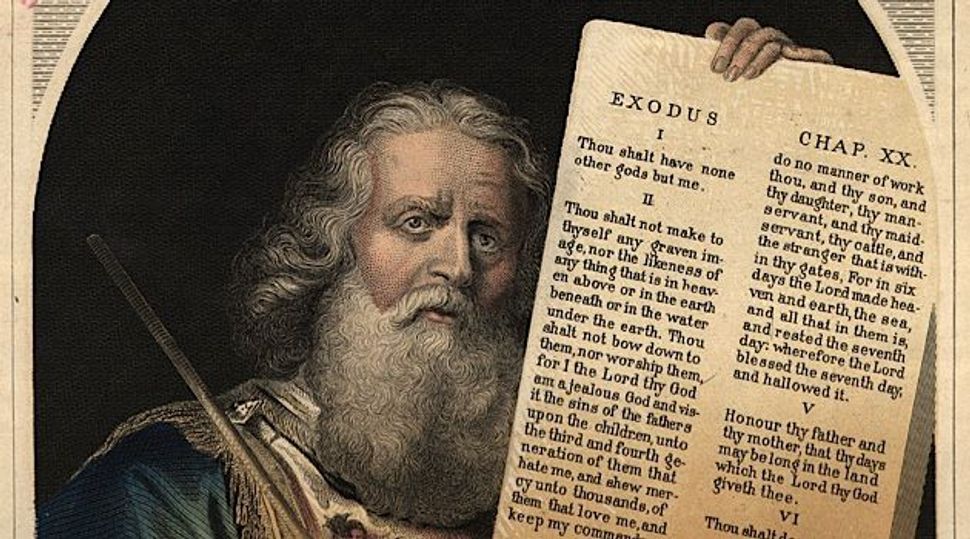 Writing The Bible: The Torah is actually a redaction of texts, threaded together from different traditions. Image by Wikimedia Commons

According to a Gallup poll taken last month, 40% of Americans believe that the Bible is the literal record of words spoken by God. A new crop of books from Yale University Press shows why this belief is illogical and incoherent.

All three cover ground that is largely familiar to scholars of religion, but still has the capacity to shock traditionalists. Far from being a unified set of texts, the Bible is the product of multiple hands, contradictory agendas, and a gradual process of codification that proceeded according to the prevailing political agendas of the times. Indeed, the boundaries of biblical literature were themselves contested over an extended period of time, settling only in the first centuries of the common era.

This is true even of the Torah itself, which scholars have long understood to be a redaction of multiple texts, threaded together from different traditions. This view, known as the “documentary hypothesis,” has been remarkably successful over its 150-year lifespan. Joel Baden’s 2012 volume, “The Composition of the Pentateuch,” surveys the history of the documentary hypothesis, observing that subsequent scholarship has provided better evidence for the hypothesis than did the original theorists.

Baden emphasizes that this hypothesis is, first and foremost, a literary solution to a literary problem. Traditionalists sometimes treat it as a religious point of view — a matter of opinion, much like some fundamentalists regard the theory of evolution. But neither evolution nor the documentary hypothesis is a “point of view.” They both try to explain otherwise perplexing evidence.

In the case of the Pentateuch, Baden thoroughly summarizes the “problem”: The text as we have it is rife with factual and doctrinal contradictions, repetitions, omissions and errors. Some are well known, such as the two versions of the Ten Commandments, and the stitched-together narrative of Joseph being sold into slavery, which makes no sense as a single narrative. Others only reveal themselves upon close inspection.

Traditional commentators were familiar with most (though not all) of these issues. But they worked from a premise that dictated their conclusions: The Bible was a work of divine authorship, and therefore it must somehow make sense. No interpretation was too contorted: God speaking the words “remember” and “preserve” at the same instant, Joseph being sold into slavery twice, whatever. If the axiom is that the text absolutely must make sense as the product of a single author, anything goes.

Yet that axiom is only a premise, not a conclusion. Viewing the text objectively, without taking the divinity of its author as a given, it becomes clear that the Torah contains multiple traditions that were later edited together. Most of “The Composition of the Pentateuch” proceeds along this path. Helpfully, Baden has organized the book thematically, according to different types of textual issues, and provided case studies for each and careful reconstructions of the textual strands in question.

The results can be amazing. Reading Baden’s sifted and reconstituted biblical passages is like a breath of fresh air. Suddenly, the stories make sense, the narrative proceeds without perplexing insertions and repetitions, and the distinct theological agendas of the different texts emerge. It’s often an astonishing journey, and in refreshing the documentary hypothesis, Baden has written an excellent introduction to it, suitable for students but accessible to laypeople.

Michael Satlow’s “How the Bible Became Holy” begins where Baden leaves off. Satlow notes that the documentary hypothesis is now basically a matter of consensus among experts who read biblical literature closely and without theological bias. As the title implies, his question is different. How did these texts, and not others, come to be regarded as sacred? Were they uniformly accepted? And when?

Satlow immediately rejects the traditional explanation that the masses of Israel readily accepted these texts as sacred. What he proposes instead is surprising. Biblical texts, Satlow says, were initially the property of a tiny subclass of elite scribes. They had very little authority, and may even have originated as exercises in transcription. Only much later, as late as the rabbinic period, was the written word given such priority. The “people of the book” was a late invention.

“How the Bible Became Holy” is more audacious than “The Composition of the Pentateuch.” Baden stays with literary texts, using extratextual evidence to support but not greatly advance his readings. Satlow, however, employs archeological evidence, non-biblical texts, and, occasionally, speculation.

Some of Satlow’s evidence is revelatory: He makes a convincing case that the scribal class only came to Jerusalem after the destruction of the Northern Kingdom. Judea was a backwater, but when the Assyrian-influenced Israelite scribes arrived, they brought sophisticated traditions that transformed Judean religion. Other evidence is less persuasive, like Satlow’s repeated suggestions that these texts were mere scribal exercises, one step above penmanship practice.

What emerges is a fascinating inversion of the Bible’s picture of reality. If you were an average Jew in ancient Israel, you gave authority to family traditions first and foremost. These probably included the worship of multiple gods, from El and Baal to familial “household gods” who protected house and hearth. Priestly elites competed for authority, with the Jerusalem cult only one of many such institutions. Some kings were pluralistic; others favored one cult over another.

It was in part an accident that the Jerusalem group’s traditions — which, of course, privileged their god, YHVH, and their sacrificial cult — took primacy. Those imported-from-Israel scribes had a lot to do with it. Eventually, when the exiled Judeans returned from Babylonia in 539 B.C.E., it was the YHVH-centric traditions that were consulted for authenticity — and the texts’ authority became central.

In a way, this makes sense. After the Babylonian conquest (and Persian conquest of Babylonia), there were no direct family traditions anymore; everything had been uprooted. These old scraps of texts suddenly became the repository of ancient wisdom.

Satlow’s story continues on through Ezra and Nehemiah, the Sadducees, the Dead Sea Scrolls, and onward through the early Christians and talmudic rabbis. This part of the story also appears in Timothy Lim’s scholarly “The Formation of the Hebrew Canon,” which focuses on the canonical debates that occupied Jewish and Christian communities, and which makes a valuable contribution to biblical scholarship, albeit one of less interest to non-specialists.

But by now the contours are clear — far from being a straightforward adoption of texts universally acclaimed to be holy, the composition of the Bible proceeded in fits and starts, with multiple competing agendas.

For the contemporary Jewish practitioner, perhaps the central question is what all this means theologically. I resisted the documentary hypothesis when I learned about it in college. Gradually, I settled on a compatibilist position: Yes, these texts where written by humans, but were “divinely inspired” and could be said to be written by God as well. Eventually, I set this, too, aside, making peace with the textual, historical and archeological evidence that these scholars have adumbrated here.

At what cost? I won’t dissemble: Losing my faith in Torah mi’Sinai — the traditional belief that God spoke the entire Torah to Moses on Mount Sinai—did, indeed, change how I regarded Jewish text and tradition. Some specialness has been lost, along with traditional understandings of authority. The yoke of Halacha (Jewish law) is one voluntarily assumed, not compelled by some unbroken chain of tradition.

But the point is that there isn’t really a choice between the traditionalist view and the historical/scholarly ones. The traditionalist view is false. So the real choice is between different ways of being religious: one that admits the truth, and another that denies it in the face of all available evidence.

And in this regard, my choice of the former has led to an important loosening of doctrinal bonds. I have come to believe that the value of Jewish religious practice exists independent of its foundation myths. If there is merit to the wisdom of the Torah, it exists on its own, not because God spoke it on the mountain. If there is value to the practices of Judaism, it exists regardless of its invention by priests in the sixth century B.C.E..

Traditionalists can act as if everything is at stake in these factual debates. If the world is five billion years old, the church service is meaningless. If the Torah was written by four sets of authors, the beauty of Shabbat disappears. None of this need be the case. Satlow, Baden, Lim, and hundreds of scholars like them are, in the end, only pursuing the truth. And however one elaborates the meaning of God or religion, surely they must have something to do with truth. This, in itself, is a religious value, since whatever God or religion can be said to be, surely they must have something to do with truth. If that cardinal principle is to be maintained, the insights of these textual experts must be welcomed, even if they shake the foundations of religious dogma. To the extent they are correct, they are further iterations of the truth. And the pursuit of that truth, not self-deception or willful ignorance, is the task of religious adulthood.

Jay Michaelson is a contributing editor of the Forward. He was the 2014 winner of the Deadline Club Award for opinion writing.