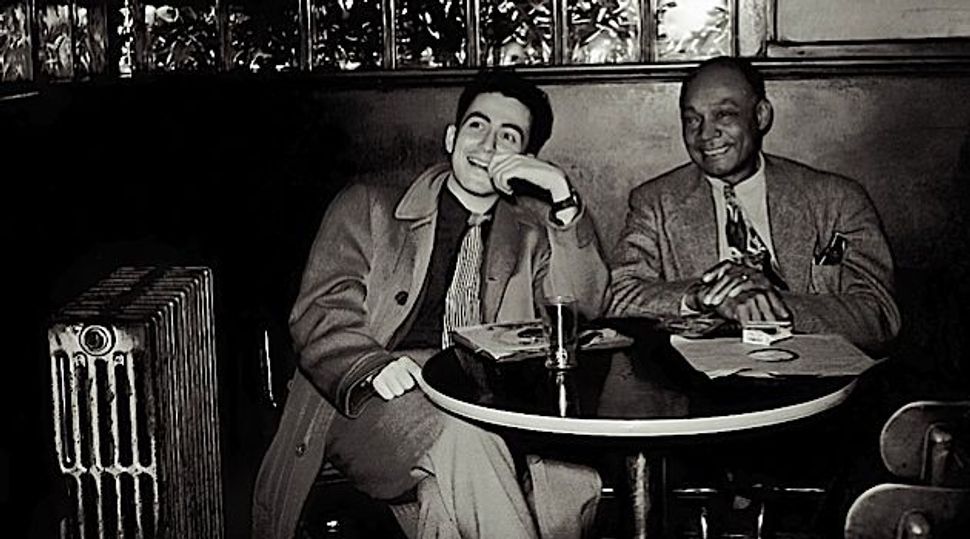 Sittin’ at the Savoy: Nat Hentoff (left) and clarinetist Edmond Hall as seen in David Lewis’s documentary, ‘The Pleasures of Being Out of Step.’ Image by Bob Parent

The writer and activist Nat Hentoff has died at 91, ‘surrounded by family and listening to Billie Holliday’s music,’ as his son put it on Twitter.

Here’s a look back at the bearded, jazz-loving, proudly aetheistic, First Amendment advocate and columnist, written after the release a 2013 documentary about his life and career.

The title of David Lewis’s documentary “The Pleasures of Being Out of Step/Notes on the Life of Nat Hentoff” begs a central question: Has Hentoff, 89, famed social commentator, critic, jazz writer and activist, really spent his life being out of step? Or is that largely a romanticizing conceit?

If one considers the prevailing conformity of Eisenhower-era culture out of which his career first flowered, the answer, of course, is yes; a bearded, left-leaning, jazz-loving, African-American-befriending agnostic Jew was about as out of step as a person could get. But situated more narrowly within his own milieu, among his own kind, this East Coast child of the Great Depression who lived in the heart of Greenwich Village, frequenting its lively night scene while helping to forge the distinctive tone of its own local newspaper, has spent most of his life not only in step, but also frequently choreographing those steps for his confreres.

Nevertheless, Hentoff was, in his way, in the vanguard. He developed a love for jazz early in life, and unlike many fans of his generation, took it seriously as art music rather than as glorified dance music. He brought to his listening a quality of focused, sustained attention that has always been rare. In Lewis’s film, Hentoff relates a story that seems as extraordinary as it is characteristic of the man: Unable to appreciate Charlie Parker’s genius — the ideas were too dense, he says, and came too quickly for him to grasp — he followed a friend’s advice and listened to Parker’s records at half-speed, closely and repeatedly. Slowed down, the music gradually became comprehensible, its intricacies less opaque, its beauties less veiled, and he began to understand the scope of the talent on display. It is no accident that Hentoff was the first non-musician to be named a Jazz Master by the National Endowment for the Arts.

Musicians themselves sensed in him a kindred spirit, and many became his personal friends. Charles Mingus wrote in his memoirs that Hentoff was one of the few white men with whom he found it possible to form a deep, abiding friendship. The writer’s admiration for his favorite artists was unfeigned, wholehearted and free of any consciousness of a racial divide. Interracial friendships were not so very rare in left-wing circles during the 1950s; nevertheless, there seems to have been a special quality of warmth and receptivity that Hentoff brought to these relationships.

Besides jazz, Hentoff’s other passion was the First Amendment. He was as consistent — and as fanatical — about civil liberties and freedom of speech as he was about music. When American Nazis wanted to march through Skokie, Illinois, a town with many Holocaust survivors among its denizens, it caused a schism in liberal circles. Did hateful expression as ugly and provocative as that of the march qualify as protected speech? Many said no, but Hentoff was unwavering, publicly and vociferously supporting the ACLU in its defense of the Nazis. No doubt this position remains controversial to many. But as Margot Hentoff said of her husband, he tended to feel it necessary “to take things to an absolute position.”

Lewis, the documentary’s producer and director, is a veteran journalist, and this his first feature-length film. So how should we assess it? Do we judge it as an aesthetic artifact without regard to its subject? Or do we like it or hate it depending primarily on our personal reactions to Nat Hentoff’s tastes and opinions? Can we simply ask whether it holds our interest?

According to this last criterion, the documentary emphatically succeeds. It is a compelling portrait of a specific time and place, easy to view in retrospect as a verdant intellectual oasis amid a vast gray desert. Hentoff is a fascinating figure worthy of our attention. Andre Braugher provides authoritative narration. And Lewis has assembled a congenial and lively group of witnesses, especially the witty, skeptical Margot Hentoff, the fine jazz historian Stanley Crouch, and Hentoff’s estranged but apparently still grudgingly affectionate Village Voice colleague Karen Durbin

Perhaps the most striking presence is that of the late Amiri Baraka; despite a history of having penned, along with a few superb plays, some repellently anti-Semitic screeds (quite a few of them produced after he claimed to have abandoned that prejudice), he nonetheless offers a sympathetic and insightful account of the natural alliance between African Americans and Jewish Americans, along with an acknowledgment that most of jazz’s early white enthusiasts tended to be Jews. His testimony in the film is gripping in its own right and startling when considered in its context.

But judging the film as a crafted object, one has to admit that it is not edited with anything resembling a sure hand. If Lewis was guided by some principle while shaping his documentary, if there is some overarching architecture governing the way the succession of historical footage and testimony is structured, I fail to perceive it. The film jumps around chronologically and in terms of subject matter, and cuts from witness to witness without apparent logic or purpose. Virtually every scene succeeds in holding our interest, but the way these scenes are assembled appears almost random.

With one exception. Mr. Lewis — or perhaps it’s Mr. Hentoff — has a surprise for us up his sleeve, and that surprise is saved for the final ten minutes or so of the film. In the last decade, Hentoff turned violently against abortion. He became as vociferously pro-life as the most zealous evangelical Christian. In the film, he presents this change of heart as a logical extension of his belief in individual freedom — a line of thought implicitly granting personhood to a developing fetus — along with his longstanding opposition to capital punishment.

Regardless of where one stands on this issue— and independent of how one weighs the logical consistency he claims to embrace — this stance comes as a shock (even his wife seems a little shocked). As does a final card superimposed over the film, telling us that in 2009 Hentoff became a Senior Fellow at the Cato Institute. The film identifies the Cato Institute as “a libertarian think tank,” which, while not inaccurate, doesn’t do it justice. It is a rabidly right-wing entity founded by the Koch family; other than its stance on abortion, one can say with justice that it flies in the face of virtually every cause Hentoff has championed. But as if to confirm the thoroughgoing nature of his apostasy, Hentoff has recently endorsed Rand Paul’s presidential candidacy. An astonishing, an unthinkable development; it’s as if the word “libertarian,” all by itself, has overridden not only the man’s lifelong value system, but his higher cerebral functions.

Hentoff was fired from the Village Voice in 2008; many suspect it was because of his pro-life stance, although the paper’s owners deny it. He certainly lost friends; his combative forensic style was never gentle, and when it was turned on erstwhile allies, it seems to have alienated many of them permanently. In his ninth decade, Nat Hentoff has justified the film’s title. He’s finally, decisively, out of step.

Erik Tarloff is a screenwriter, novelist, and playwright. His latest novel is ‘All Our Yesterdays.’”