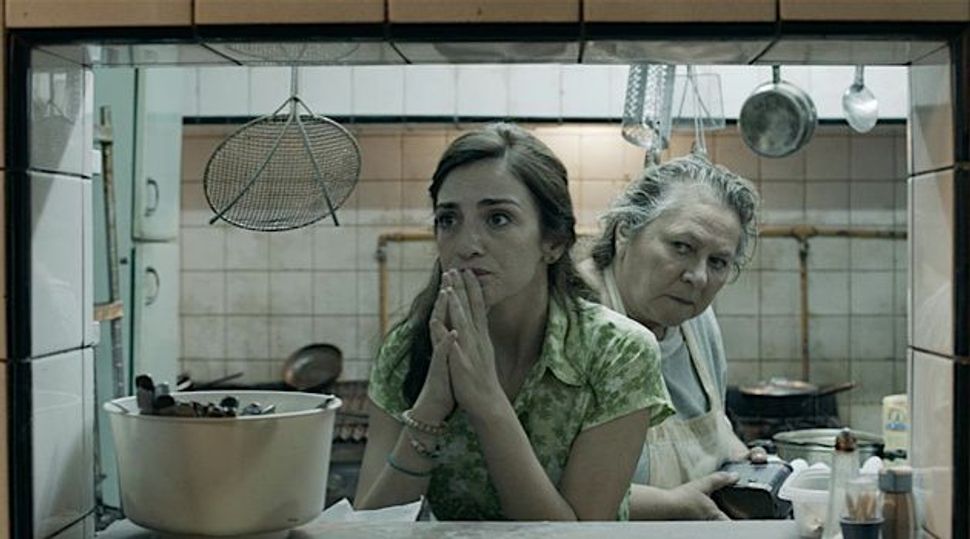 Short Cuts: ‘Wild Tales’ is composed of vignettes that suggest stories by Kafka or Etgar Keret. Image by Kramer and Sigman Films

‘Why did you ruin a perfectly good Jewish wedding?” The question is addressed to Damián Szifrón, the 38-year-old director of “Relatos Salvajes” (“Wild Tales”), the Argentinian film that competed at this year’s Cannes Film Festival. He seems caught off guard. Indeed, it’s unlikely that many of the audience members recognized the amped-up version of “Havenu Shalom Alechem” or the 1979 Eurovision-winning Israeli song “Hallelujah” during the film’s climax, an epic meltdown at a glitzy wedding complete with a klezmer band and simcha dancing.

“Well,” Szifrón begins somewhat timidly, raising his voice to be heard over the rustling of a palm tree overhead, “I am Jewish, so I can make those jokes without being offensive.”

We are sitting near the shore of the Magnum Beach (as in the ice cream) on a beautiful day. With his medium-length red hair and aviator shades, Szifrón seems like the most laid-back director in town. But he still hasn’t answered the question. “Why a Jewish wedding? It’s probably because I know Jewish weddings,” he hazards, by way of explanation. “I feel surprised by some kind of energy that there is during the Jewish dances. They’re out of control often. They can take the groom’s trousers off and stuff like that. So it sounded like a good context to tell the story,” he says.

The sixth and final “wild tale” of the film’s title, which concerns the ruined wedding in question, features a vengeful bride who goes AWOL after her groom confesses to a liaison with a co-worker who is also one of the wedding guests. “In Buenos Aires, it’s natural even for Jewish families who don’t have a lot of money to spend a lot on weddings. It’s the kind of scenario that makes the story more dramatic. Because what’s being ruined is something very expensive,” the director says.

Ever since it was announced in the main slate of the world’s most prestigious film festival, Szifrón’s film had been considered the outsider in the competition. And while it didn’t score a festival prize, this highly baroque and wicked film, an anthology of stories about characters losing control, was my favorite film of the festival. Sublimely lurid, in a manner that betrays influences ranging from Luis Buñuel and Alejandro Jodorowsky to cult 1980s TV, “Wild Tales” is the sort of visionary work that heralds a major talent.

Szifrón, whose grandparents come from Poland and who was raised in a secular family, has two previous features to his credit as well as an incredibly popular TV series, “Los Simuladores” (“The Pretenders”), about spies for hire who solve the problems of ordinary people. “Relatos Salvajes,” which was co-produced by Pedro Almodóvar and has already been picked up for distribution by Sony Pictures Classics, is likely to make Szifrón’s name known outside of Latin America.

The individual vignettes that make up the film bring to mind stories by Kafka, O. Henry, Roberto Bolaño or even Etgar Keret (although Szifrón drew a blank when I mentioned the Israeli writer’s name). The first tale is the punchiest and quickly establishes the film’s atmosphere of matter-of-fact surrealism. It takes place aboard a plane where all the passengers slowly realize that all have a common (and unseen) acquaintance. But this Twilight Zone-worthy setup soon takes a darkly humorous turn and, like in many of the other tales, the punch line has the force of a stick of dynamite.

Even in the most outlandish segments, there’s often an undercurrent of social commentary. Violence and corruption are endemic to the story-worlds that Szifrón invents. Take the waitress at a roadside diner who finds herself alone with the crime lord who wrecked her family decades earlier, or the ballistics engineer who wages an epic battle against the DMV, or a well-to-do family bribing everyone in sight to cover up a fatal hit-and-run.

“I don’t think this crazy world is natural,” the director says, adding that the film’s element of social criticism goes beyond problems that are specific to Argentina. “It’s not our natural space. It’s a corrupt space and I don’t feel it’s fair to judge a person in this system,” he continues. The film allows us to sympathize and root for characters whose savage behavior is their only remaining defense against the cosmically unfair circumstances of their existences. Often the victims quickly become aggressors and vice versa, leading to many shades of moral ambiguity.

“We repress our primal instincts often in society and that has a function, but it has consequences too,” Szifrón says, adding that he finds himself identifying with the redneck driver of a rickety Peugeot who terrorizes a slick yuppie in his brand-new Audi. The segment itself is a variation on a well-worn theme, the same one, in fact, that Spielberg made use of in his 1971 directorial debut “Duel.”

Szifrón cites Spielberg as a major influence on his work, singling out “Indiana Jones” and “Jaws” as well as the short-lived anthology TV series “Amazing Stories,” all of which were part of his cultural background coming of age in the 1980s. A similar taste for thrills, adventure and irony inform “Wild Tales,” which, as Szifrón describes it, only acquired its present, episodic form once he let his imagination take flight. “I wrote one story and then another and suddenly, very quickly, I realized I had a movie,” he says.

“There a very close relationship to what I do now and what I did when I was a kid,” the director muses. “I used to play with little toys, imagining stories. It’s the same now.” He pauses. “Except I’m an adult and I can make a living with that.”

A.J. Goldmann is a journalist based in Berlin. He is a frequent contributor to the Forward.