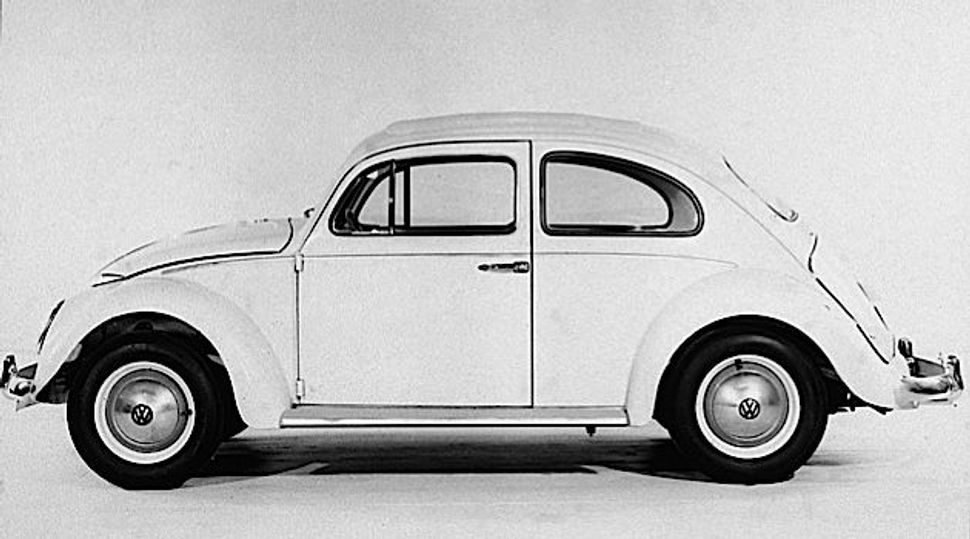 Editor’s Note: A version of this article was originally published in the Forward on June 14, 2014..

The renowned advertising copywriter Julian Koenig, who died at age 93 on June 12, 2014, baffled the 1960s hucksters on the hit TV series “Mad Men.” In the show’s first season, the fictional admen are puzzled by Koenig’s real-life successful campaign for marketing the Volkswagen Beetle in America. By the [show’s second year, Don Draper approves of an campaign devised by two aspiring admen which has the “fingerprints of Julian Koenig” on it, an evolution in taste explained in “Mad Men, Mad World: Sex, Politics, Style, and the 1960s.”

Koenig’s fingerprints were on more than just hucksterism, although in later years he would liken advertising to “deception” and downplayed its significance as a human endeavor. As Paul Leventhal, who founded the Nuclear Control Institute in 1981, writes in “Nuclear Power and the Spread of Nuclear Weapons,” Koenig devised the [full-page ad in the Sunday New York Times that launched the organization with a headline asking the prescient question, “Will Tomorrow’s Terrorist Have an Atom Bomb?” Leventhal notes that the question is still “highly relevant,” although he persuaded Koenig to serve as a long-time member of the board for the Institute by arguing that the “plutonium problem” would have to be solved in the next five years, or “he and I probably wouldn’t survive to talk about it anyway.”

Koenig did survive, and also originated the name for Earth Day, the annual April 22 commemoration of environmental protection. He volunteered to help a U.S. Senate committee in 1969 to promote a day to celebrate the environment, just as he would volunteer to promote gun control and the candidacies of Robert Kennedy. Since the environmental day happened to fall on his own birthday, Koenig found a rhyming term that captured the world’s imagination, while also offering his colleagues a choice of alternatives, including Ecology Day, Environment Day, and E Day. Now Earth Day is celebrated in 192 countries each year.

Arguably, Koenig also made a positive impact on the environment by devising the “Think Small” campaign in 1959 to promote the compact, fuel-efficient Volkswagen Beetle, despite the fact that the car was originally contracted in 1934 by Adolf Hitler to be designed for drivers in Nazi Germany. Koenig recounts in “Helmut Krone. The Book” about an art director he worked with on the Beetle campaign, that he was assigned the job “because I was the only one who had heard of the car. I had one of the first Volkswagens in the States, probably one of the first hundred, long before I ever worked” at the ad agency involved. From a family of German Jewish origin, Koenig elected to drive the economy car at a time when vast gas-guzzling automobiles were favored in America, as explained in the authoritative history, “Real Mad Men: The Remarkable True Story of Madison Avenue’s Golden Age.” Koenig’s innovative “Think Small” approach has been called the “world’s greatest ad.”

Yet Koenig himself would likely be skeptical of any such hyperbole, just as he refuted claims in recent years by another old advertising man, George Lois, who purported to have concocted campaigns that were in fact written by Koenig or in collaboration with others. Characteristically, Koenig responded to a credit-grabbing 2003 memoir by Lois by running a page in the advertising trade publication Adweek, with the headline: “Low, Lower, Lois.”

Yet Koenig himself was not shy about making claims which have yet to be verified, such as [in a 2009 radio interview for “This American Life” produced by Chicago Public Media. During the chat, Koenig claimed to have invented thumb wrestling in 1936 as a counselor at Camp Greylock, a boys’ summer camp in Becket, Massachusetts whose other attendees and counselors have included businessmen Stanley Marcus, Ron Perelman, and Jonathan Tisch. Koenig explains that all other forms of wrestling were popular at the competitive camp, so he conceived of thumb wrestling “with the same rules as a hockey puck face-off. One, two, three, go!” (Subsequently, other claimants to the invention of thumb wrestling have included the novelist Norman Mailer).

Despite repeated statements about the ultimate insignificance of advertising (he once told his son: “If you don’t find something you want to do and really work at it, you’re going to end up like me: a writer of short sentences.” Koenig’s short sentences, some motivated by admirable ethical values, have become part of American popular history.