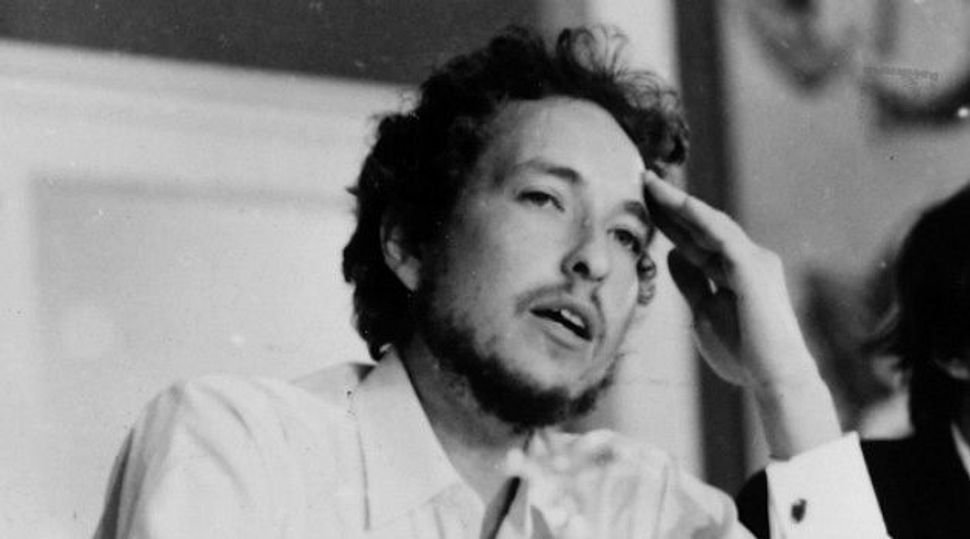 ‘What is this sh–?” Greil Marcus famously asked in his Rolling Stone review of Bob Dylan’s most reviled album, “Self Portrait.” Throughout my reading of “Dylan: The Biography,” by Dennis McDougal, I’ve been asking myself the same question.

It purports to be “the ultimate biography of the musical icon,” the one that will reveal “the real story behind the myths,” the book we’ve all been waiting for, in which the riddles will all be answered and the texture of the man’s life will be made as visible as his legendary illusions and feints.

But what is it really?

It’s a book that tracks Bob Dylan’s peripatetic life from his childhood in Hibbing, Minnesota, through his ongoing Never Ending Tour, which has taken him around the world from gig to gig for much of the past 20 years. We hear about his high school bands, his dalliance on the fringes of the Minneapolis folk scene, his move to Greenwich Village (which McDougal annoyingly calls “Greenwich” throughout the book, though anyone with even a casual knowledge of New York City knows it’s commonly referred to as the Village), and his explosion onto the national scene. We hear about how he went electric at the Newport Folk Festival and hid out in Woodstock after what may or may not have been a faked motorcycle accident. We hear about how his obsessive fans stalked him and how crazy A. J. Weberman dug through his trash. We hear about the circus that was the Rolling Thunder Revue tour and about his conversion to born-again Christianity. The story continues on and on, through his teaming up to tour with the Grateful Dead to his return in recent years to the folky roots music that started his career, which produced a string of albums that rank with his very best. All of this without telling even the least attentive Dylan fan much of anything he or she doesn’t already know.

It’s a book that gets bogged down in the facts of his career while ignoring the animating force behind it. This album, the book tells us, was recorded in that studio; this tour consisted of x number of gigs; here’s a list of the other pop stars who appeared with Dylan on “We Are the World.” For hundreds of pages, it informs the reader of every last detail of Dylan’s business transactions as though the meaning of a life could be reduced to a spreadsheet.

The book knows no middle ground. When it’s not breathlessly claiming that Dylan’s the voice of his generation, a prophet, a poet worthy of the Nobel Prize, it’s dismissing him as a plagiarist and condemning his drug addictions as though an artist can’t possess contradictions.

It’s a book that’s happy to leer over the details of Dylan’s sometimes girlfriend Ruth Tyrangiel’s palimony suit against him — presenting accusation as fact and burying the crucial information that she lost the case — as it is to legitimize William DeVogue’s claims of being Dylan’s son, despite a near total lack of evidence.

It’s a book that compulsively includes footnotes, as though to prove its seriousness, though most of them tell the reader things like how high Dylan’s albums rose on the Billboard chart or how much his houses cost, or, bafflingly, that “[m]any Generation X’ers would be surprised to learn ‘Knocking on Heaven’s Door’ was not a Guns N’ Roses original.” Some of these footnotes even tell the reader things the book has already said in the main text.

It’s a book that will assert on page 198 that “[t]he kid from Hibbing who’d once told Nat Hentoff and Studs Terkel that he didn’t care about money had come to care about it a lot,” and then tell us on page 199 that “like some aging graduate student, Bob’s heart remained vested in expanding his horizons, not making more money.”

It’s a book that wants you to know that Dylan is “a musical hero to a new generation, the so-called Millennials, all of them born after 1980” because his “poetry kept pace with the ever-shortening attention spans promoted by Facebook.”

It’s a book that contains this: “Dylan was not so different from the Boomers he led out of the ‘60s. Now beginning to wonder where all that youthful promise had gone, they too faced a geezer future.”

In short, it’s a book that thinks it’s clever but consists nearly entirely of clichés, a scattershot, poorly written book that leaves a greasy film all over your hands.

And yes, if you squint, you might find an underlying argument that Dylan never left little Bobby Zimmerman behind, that he’s really just a doting Jewish son who made sure that all his children had bar mitzvahs, and whose closest friends are still the guys he met at the Zionist Herzl Camp where he spent his pubescent summers. It’s interesting to learn that he attempted to obtain a get after his first marriage and that he raised money for the Lubavitchers.

“Anybody who wears jeans is a Hebrew,” he once said. “Also, anybody who wears a baseball cap backward, that’s a yarmulke.” A typical Dylan joke, but there’s something worth exploring in it. A writer other than Dennis McDougal might have done so.

Instead, we get the kind of book that begs the question: Who was this written for, and why?

Late in his Rolling Stone review, Greil Marcus answers his own question. “The purpose of Self Portrait is mainly product and the need it fills is for product—for ‘a Dylan album.’” It’s the typical tautology of the marketplace. The purpose of “Dylan: The Biography” is to provide us with yet another Dylan biography.