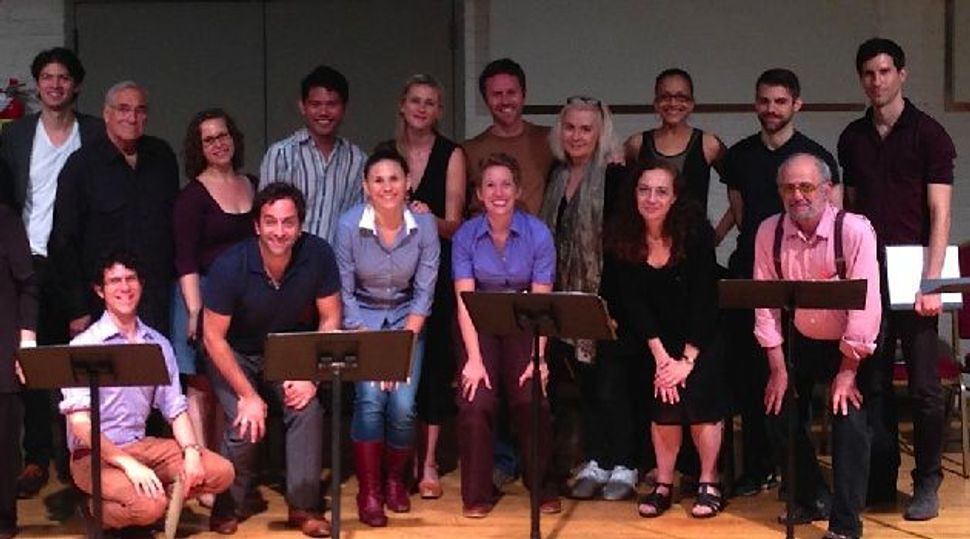 Funny, You Don’t Look Pewish: Short plays by ten Jewish playwrights were presented at a staged reading at the Judson Memorial Church in New York. Image by David Shmidt Chapman

The Pew Survey of American Jewry came as a shock to the chattering classes (or kibbitzing classes) of professional Jews, the pundits, academics and culture boosters that make a living by analyzing or promoting Judaism, myself included. Of course, anybody with eyes could see that interest in the religion has dwindled and many American Jews see little point in supporting Israel. But the decline was much steeper than anybody expected. American Jewry is quickly becoming a divided community, with a minority of Zionist daveners and a majority of “secular Jews” — that is, those whose identity starts and stops with an occasional hankering for whitefish.

So it’s no wonder that the study generated a flurry of discussion among professional Jews and the people who listen to them. And in many ways it’s a productive conversation. But the one problem is that the people whom we need to hear from the most — the indifferent Jews — haven’t been chiming in. It’s likely that most of them haven’t even heard about the survey. This is unfortunate because it would be helpful to know more about their indifference, if only to track the death throes of a moribund community. And it’s also unfortunate because even indifferent Jews, with little prodding, will quite Jewishly talk your ear off about their non-Judaism.

David Shmidt Chapman, an energetic young theater director, also noticed that the voices of a usually voluble group were missing.

“In the Jewish world everybody was talking about it, rabbis, scholars, academics,” Chapman told me. “But the survey didn’t register with the artists. They didn’t know about it. And the survey should have had a bigger impact on the creative community, because artists can be good emissaries of cultural information.”

Chapman was inspired to commission short plays from ten Jewish playwrights who usually don’t write about religious issues. Then, with sponsorship from ROI, he put together “Pew-ish: Artists Responding to the New Jewish Identity,” a staged reading of the plays that took place on June 26th at the Judson Memorial Church.

I must admit to some trepidation about the evening. As a writer who explores the nexus of religion and culture, I’ve endured a lot “artistic responses” to Jewish issues. In particular I’ve seen a lot of bad theater, the kind that makes you wish you’d listened to your mother and gone to law school.

But “Pew-ish” was surprisingly enjoyable. One reason is because the show opened with Adam Blotner performing as Ari Sweatlove, a Jewish hippy singer too dim to notice just how patronizing he is. Later, Blotner sang about a neglected holiday: Grap your kippah and wear it / Get some cheesecake and share it / Shmini Atzeret.

As this was a staged reading, it was understandable that the plays themselves were at times a little inchoate or ragged. Nevertheless they were all interesting, which is highly unusual when so many writers are involved, and most achieved moments of humor and real pathos.

One standout was “The Spivaks,” by Anna Ziegler, in which the eponymous family argue over dinner about Israel (what else?). The piece was particularly engaging for its multigenerational and contradictory approach, with the patriarch, Walter (played by a thundering David Mandelbaum), banging the table to punctuate his support for the Jewish state — which he’s never visited.

Meanwhile his petulant granddaughter, Ivy (the versatile Annie Purcell), has zero interest in Israel, comparing it to a relative “that everybody thinks is related to me but really isn’t, like a step-uncle who gets drunk and says too much.”

A second standout was “The Covenant,” or “Bagels and Butchery,” by Ken Weitzman. In this playlet, new parents debate whether they should go through with their son’s bris when the mohel who shows up is crosseyed. It’s an amusing beginning to a serious subject, especially when the wife isn’t Jewish: the word “mutilation” comes up a lot.

Jake Goodman is charming as David, an ambivalent secular Jew tortured by his indecision about the excision, and Megan Ketch is appealing as the sharp-tongued but loving wife and mother. And, as a Jewish father, I can attest to how well the play captures the horror of parents facing the insanity of circumcision.

But “The Covenant” exemplifies an interesting thread that ran through the evening. At times it was unclear just who was grappling with a religion that they don’t know much about — the writer or the characters. This didn’t necessarily detract from “Pew-ish.” After all, Shmidt’s goal was to work with writers who don’t usually tackle such issues. But I’d have liked to see one or two more voices from younger people not struggling with their Zionism or Judaism. Not for ideological reasons—Shmidt insisted that he has “no agenda” for “Pew-ish” other than dialogue, and I commend him for that. But while the Pew Survey demonstrates that the less ambivalent subset of American Jewry is fast diminishing, nevertheless it still exists.

The evening was a one-off: Shmidt, by his own admission, has “no idea” what happens next with “Pew-ish.” I hope he figures out some way to keep the conversation going. These plays are a glimpse of a generation that is rapidly losing its religion and its ability to swallow the Israeli national myth. (The one pillar that seems to be holding strong is the centrality of the Holocaust to Jewish identity and history.) It’s a generation that doesn’t know how to be Jewish. They’re lost, but maybe in a good way — because even if they don’t have answers, they’re still holding on to the questions.