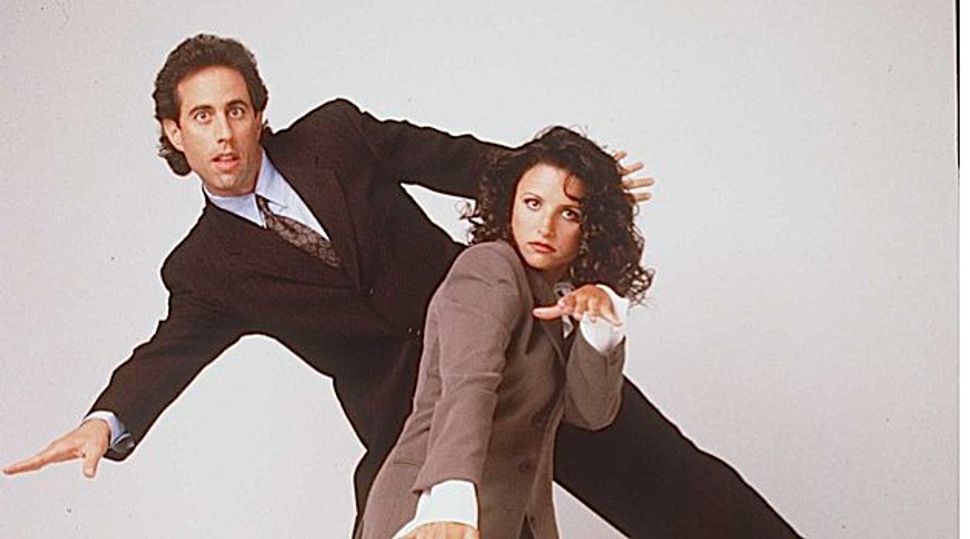 A Show About Something: ‘Seinfeld,’ starring Jerry Seinfeld and Julia Louis-Dreyfus, is celebrating its 25th anniversary. Image by Getty Images

Every era gets the sitcom it deserves. In the early 90s that sitcom was “Seinfeld,” a show about a motley collection of Jews on the upper west side of Manhattan, kvetching, kvelling and ordering soup. And now, 25 years after its premiere, Seinfeld can be seen as a turning point not only in American comedy, but in how Americans, and in particular, American Jews see themselves and their relationship with the world.

It’s impossible to separate the show and its mores from the public persona of its titular star Jerry Seinfeld. Seinfeld, the man, or anyway the version of himself portrayed on the show, was an inextricably Jewish comedian whose observational gifts rose not from religious or class difference, but from a blandly suburban sense of sameness. He was a fully assimilated Jew, a Jew in affect only, and he thrived on elucidating the nuances of inconsequential and mundane annoyances. His comedy worked on an assumption that everyone’s life — Jew and gentile alike — consisted of this sort of thing, and thus we could all identify with his petty obsessions.

“Seinfeld,” the show, famously claimed to be about nothing and in the blunt, obvious parlance of the Hollywood pitch, this may well have been true. It pointedly avoided the political and social issues that provided the premises for “All in the Family,” “Sanford and Son” and “Diff’rent Strokes,” or even “The Cosby Show” or “Family Ties” — all shows that, like “Seinfeld,” obtained cultural significance beyond their modest mandate of entertaining the masses for half an hour each week.

But “Seinfeld” wasn’t about nothing. It was about a specific entitled segment of society and though it may not have built its plots around “social issues” (read, glosses on the political flashpoints of the moment) the way previous sitcoms did, it couldn’t escape political significance simply by avoiding politics. In fact, the careful avoidance of political commentary implied a set of assumptions that we, as a nation were beginning to take on faith.

Jerry and his pals George, Elaine and Kramer were constantly affronted by the pesky frustrations that came from dealing with poor and working class people. They were mean. They were petty. They were smug and self-satisfied. Like so many Jewish comedians before him, Jerry Seinfeld built his persona on a sense of grievance, but unlike them, his grievance was directed at those with less cultural and economic power than himself. He and his friends were angry at inconvenience, not injustice. If they wanted anything out of life, it was to be told that their selfishness was justified.

And we were meant to identify with them.

Watching an episode of “Seinfeld” became the television equivalent of playing the party game “Scruples,” in which comfortably upper middle class people were invited to indulge their sense of themselves as harmless people whose decision making may be questionable, but whose biases and assumptions and essential goodness were not. The show glorified a self-centered conservatism that was new then but has now, sadly, become the norm, even among “liberal” New York Jews.