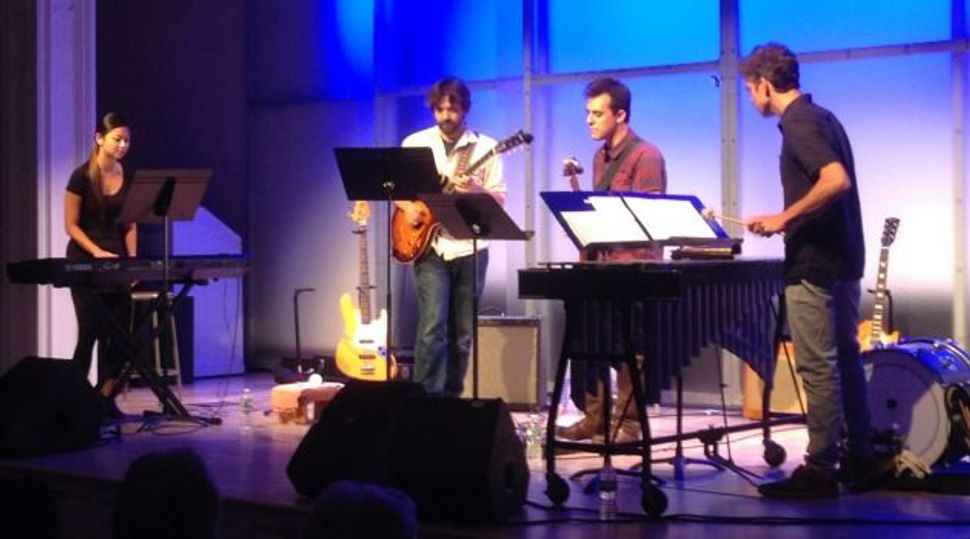 Defining Bang on a Can is hard. Founded in 1987 by composers David Lang, Michael Gordon, and Julia Wolfe, it is a musical collective made up of composers and musicians dedicated to performing, producing, and commissioning new music that is innovative in some way. Among their most prominent projects is the annual Bang on a Can Marathon, an eight-hour concert held each summer in New York. This year’s Marathon was held on June 22 at the Winter Garden at Brookfield Place, and featured an array of old and new works, including Caroline Shaw’s “Partita for Eight Voices,” which won last year’s Pulitzer Prize for music.

The music that Bang on a Can produces and performs is heavily indebted to the Minimalist movement of the 60s and 70s, which emphasized simplicity in everything from art and design to music. In fact, they often collaborate with well-known Minimalist composers, such as Steve Reich and Philip Glass.

Last Thursday, Bang on a Can members performed at the Jewish Museum, which is nearing the end of a five-month long exhibition on the Minimalist art of the 60s. Pianist Vicky Chow and percussionist David Cossin, two members of the Bang on a Can All-Stars, played alongside two members of Dither, a New York-based electric guitar quartet. It was a wild, riveting performance, and one of the first that Bang on a Can members will take part in at the museum over the coming year.

The night started with a rendition of “Warmth” written by David Lang in 2006. The two guitarists, Taylor Levine and James Moore, performed the piece by themselves on distortion-free electric guitars. They traded off simple, repetitive lines in extremely difficult ways – instead of settling into a discernible rhythm, Levine and Moore answered each other in seemingly impossible intervals, as if they were nanoseconds apart.

Next, Levine left the stage and Moore performed a set of solo études from John Zorn’s “The Book of Heads,” which was written in 1978 but recorded and released in 1995. Zorn’s pieces call for bizarre and humorous techniques, such as rubbing balloons across the guitar strings and tapping the strings with a pencil to create strange harmonics. Moore broke into a sweat switching between guitar effects pedals on the floor in front of him to produce the wacky and original set of sounds.

Chow and Cossin then joined the group onstage at the piano and percussion set respectively. Chow informed me afterwards that the group had formed for this particular performance and had only rehearsed together twice – which is remarkable considering the rhythmic complexities of the pieces they played.

The full ensemble started with “City Walk,” a pulsing work written by Michael Gordon, before moving on to Philip Glass’ “Music in Fifths” (1969) and Louis Andriessen’s “Worker’s Union” (1975). “Music In Fifths” is simultaneously brilliant and maddeningly repetitive, built on a simple ascending and descending structure that stretches out into seemingly infinite patterns. Andriessen’s “Worker’s Union” was a pioneering work that abandoned specific tones altogether and encouraged improvisation. The sheet music only gives the performers a set of complicated rhythms that oscillates around a central line.

“There is no real musical staff in the music,” Moore explained.

The performance was linked to “Other Primary Structures,” a current exhibit of 60s era Minimalist artworks that is a tribute to the museum’s 1966 exhibition “Primary Structures.” The original exhibition was a landmark moment in postwar art that brought together works by English and American artists who were making sculptures with similarly formal and abstract techniques for the first time. It helped kick-start the Minimalist movement, whose aesthetic influence eventually extended to all aspects of life, from architecture to food. A flyer for the current exhibit explains that since “Primary Structures” has been “mythologized” and “exhaustively discussed in print and in museum culture,” a “remake, a reconsideration, a revolt – with all the problems such an effort raises – is a necessary experiment.”

A remake, reconsideration, or revolt would have been quite interesting (especially since many artists dubbed “Minimalist,” such as movement figurehead Donald Judd, fiercely rejected the label). Instead, “Other Primary Structures,” which runs through August 3, is a very brief continuation of the old exhibition; the styles, materials, and even the scale of the artworks, all which are also from the 60s, seem eerily identical to the original works (now immortalized in photographs).

However, the new exhibition’s importance is more symbolic. While the 1966 version featured works by mostly white American and English men, the current exhibit evokes the cultural “other” – the many ethnic, political, and cultural groups that have been underrepresented in the Western art world. In this way, it only includes works by artists from Africa, Latin America, East Asia, Eastern Europe, and the Middle East.

Thursday night’s musical performance showcased a more radically different and perhaps more nuanced “other,” in the form of a completely different artistic medium. Although cultural representation is vitally important, minimalist music is the more interesting “other primary structure” to explore here, as it takes the elements of Minimalist visual art – simplicity, geometry, abstraction – and manifests these principles in musical, not physical, structures.

In addition, while the museum’s current art exhibit features works from “other” artists that were from the same time period, it is worth noting that Thursday’s musical program included both older and newer pieces. In other words, it displayed a retrospective trajectory of artistic influence and development that “Other Primary Structures” lacks.

Unfortunately, despite the confident, thrilling performances, all of the performed pieces were composed by white men – a fact that strongly clashes with the goals of the new exhibition.

Maybe a more universal eye should be focused on the realm of music as well – and perhaps a revisionary performance series will come in the future.