Richard Linklater’s ‘Boyhood’ Captures the Spirit of the Time 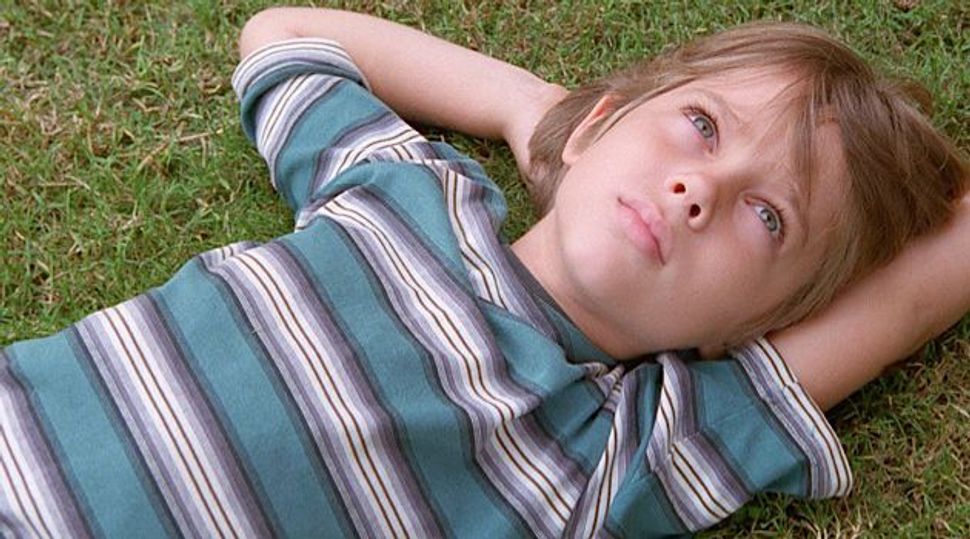 About a Boy: “Boyhood” is a slice-of-life story, except the slices are spread out over 12 actual years. Image by Universal Pictures

One of the great productive tensions between Jewish tradition and contemporary spirituality is that between time and the timeless. On the one hand, the passage of time is central in Judaism. Some of this time passes in a linear fashion — we age along with life-cycle events , from birth to death — and some according to the cycles of the seasons and holidays. But it all passes.

Much of contemporary (and contemporary Jewish) spirituality, however, dwells in the timeless. “In the Now,” in Eckhart Tolle’s bestselling phrase. “Be Here Now,” in Ram Dass’s. The dance between temporality and the evanescent present is in many ways the dance of our lives, whether we articulate it in this way or not.

Richard Linklater’s astonishing new film “Boyhood” enacts this dance as no work of art has done before. It is an instant masterpiece that took 12 years to make. And it is about the grandest of themes while remaining entirely familiar.

In a sense, “Boyhood” is a slice-of-life story — except the slices are spread out over 12 years. Twelve actual years: The film was made from 2002 to 2013, with its actors aging along with it. We watch Mason, the titular 6-year-old boy, grow to 18, and his messed-up, divorced 20-something parents grow into adults. And alongside them, we watch as cordless phones change to cell phones, cell phones into smart phones; the heady politics of post-9/11 to the exasperation of post-recession America; Blink 182 to Arcade Fire. Without nostalgia, “Boyhood” becomes the story of all of our recent pasts.

Never before has a project like this been attempted, and the result is an entirely new kind of cinematic experience. Several times, Linklater seems to play with our expectations, setting us up for climactic moments (a car crash, a horrible accident) only to deny them.

One of the film’s lessons, possibly, is to savor each moment, as time marches relentlessly on. Several of the characters make this point, not least 18-year-old Mason himself, observing in a pot-shrouded conversation that “it’s always now.” Many critics, raving about the film, seem to agree.

But this puts the matter too simply. In fact, “Boyhood” complicates the neat atemporality of pop spirituality by setting ephemeral moments against the sweep of Mason’s life, and that of his family. In the Brooklyn theater where I saw “Boyhood,” Mason’s big revelation got a knowing laugh from the crowd — we’ve all had that insight, many of us on pot. Its truth is profound, yet it is also silly, especially when set against the epic story we have seen unfold.

Similarly, Mason’s father, played by Ethan Hawke, eventually grows out of his live-in-the-moment mentality and into a kind of responsibility, even respectability. When we first meet him, the elder Mason is a ne’er do well, a wannabe musician bouncing from gig to gig and utterly neglecting the children he has abandoned. He buys them toys and enjoys fun moments at the bowling alley — but these are just moments. Where is he when his ex-wife’s alcoholic new husband beats her up? Where is he when his kids actually need a father, rather than a playmate?

The elder Mason, too, grows up over the course of the film. Midway through the film — I’ll provide a spoiler alert, but “Boyhood” is hardly a plot-filled movie — he, too, remarries, to a traditional-seeming woman whose parents are fundamentalist Christians. “I’ve finally turned into the castrated guy she always wanted me to be,” he says of his ex-wife. “If she’d just been a little more patient.”

Note the irony: The former acolyte of “seize the day” (and here I can’t help but think of Hawke’s childhood role in “Dead Poets Society”) now wishes his ex-wife could have been patient and waited for his extended adolescence to pass. Time defeats the timeless — eventually.

Interestingly, this evolution also takes place in the context of traditional religion. The elder Mason’s new in-laws provide a bit of comic relief, buying the younger Mason a gun and dragging the family off to church. But they also provide a kind of ballast. In contrast to the elder Mason’s bachelor-pad existence, and the serial jerks Mason’s mother (unnamed in the film, subtly portrayed by Patricia Arquette) shacks up with, they provide one of the few places of domestic stability. To be sure, neither Mason is converted to the old time religion. But they don’t quite ridicule it either.

In Jewish esoteric traditions, the dynamic interplay between sublime moments and the continuity of the everyday is represented by two of the Sefirot of theosophical kabbalah, Netzach (eternity, endurance) and Hod (splendor). Most Hollywood movies are about Hod: big moments, great sex, flashy cars, transformative experiences. But most of life is about Netzach: coffee in bed the next morning, taking care of the sick kid, amassing meaning not just by chasing the next thrill, but by gradually building a life of relationship and mutual humanity.

In studiously avoiding Hod moments — almost none of the typical episodes of a “coming of age” film are present here — “Boyhood” calls our attention to a different aspect of the poetic. Somewhere, out of all the moments of the ordinary, there amasses an accumulation of the miraculous.

Richard Linklater’s ‘Boyhood’ Captures the Spirit of the Time