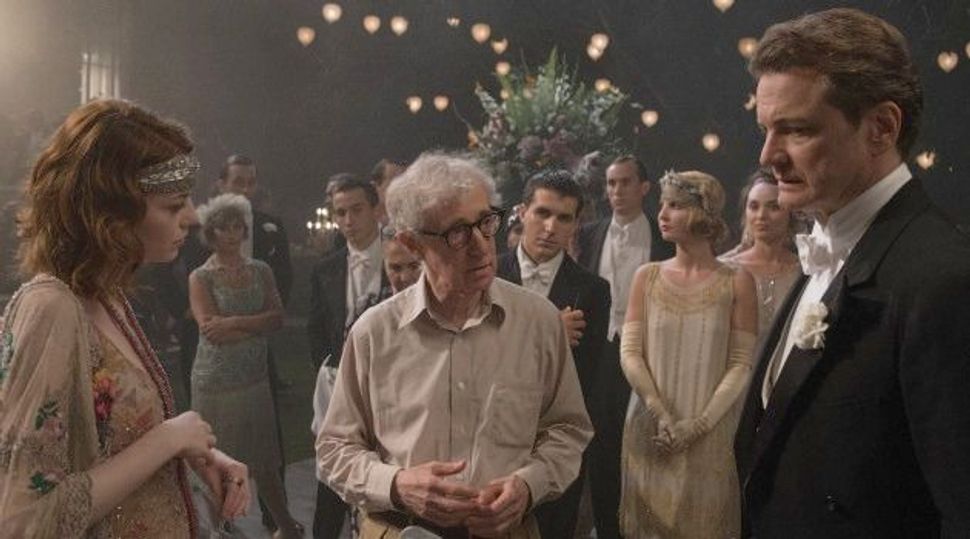 Misdemeanors, Not Crimes: Woody Allen directs a scene from ‘Magic in the Moonlight.’ Image by Sony Pictures Classics

Back in February, my colleague Ezra Glinter said that because of the allegations of sexual misconduct lodged against Woody Allen, Ezra felt “tainted” writing about him, and warned that “when the next Woody Allen movie hits theaters,” he would not be able to separate the man from his art.

Alas, Ezra’s savaging of Allen’s new film, “Magic in the Moonlight,” has lived up to that promise. He is wrong, morally and aesthetically, on three counts.

First, nowhere in either of his pieces has the critic engaged with the facts of the case. For example, that the claim of molestation was independently investigated and refuted; that it was found non-credible by an adoption agency that ended up placing children with Allen and his wife Soon-Yi Previn; that its only evidence is the memory of a highly over-coached seven-year-old (who of course “remembers” the incident today, just as I remember many things that never happened in my childhood); and that it was shown to be fundamentally incoherent – in terms of motive, character, timing, and even geography – in a (weird) op-ed by the accused himself.

Nope. Allen has been accused and thus found guilty. According to Ezra’s review, he is a “rotten” person. Done!

Second, and even more disturbingly, Ezra blends two very different sexual peccadillos in his condemnation of Allen: that he likes young women (obviously true), and that he molests seven year olds. Spot the difference? One is a somewhat pervy peccadillo shared by, oh, roughly half of heterosexual men. The other is a violent crime that deserves our harshest condemnation.

Of course, Soon-Yi Previn was not just any younger woman. She was Farrow’s step-daughter, and while she didn’t live with Allen, wasn’t Allen’s child, and didn’t have a father/daughter relationship with him – yes, it’s creepy. But there’s a chasm between creepy and sinister, is there not?

Of Allen’s penchant for writing his own May-December romance into his films, Glinter writes, “what once seemed like harmless foibles now appear in a more sinister light… a beautiful younger woman pursuing an older man who seems not only oblivious to her charms, but also actively uninterested in them. When she finally breaks through, he has the power to accept or reject her, take her or leave her. It’s a juvenile fantasy in every way.”

Why is any of this “sinister,” exactly?

Once again, it may be argued that this “fantasy” is creepy, and it certainly does appear often: in “Manhattan,” “Mighty Aphrodite,” “Whatever Works,” “You Will Meet a Tall Dark Stranger,” and now “Magic in the Moonlight.” But it’s morally wrong to confuse that which some of us find weird or uncomfortable with that which is evil.

Maybe I’m just a little sensitive here, since homosexuals were, for decades, accused of being pedophiles. Maybe I’m a little suspicious of condemning other people’s sexual choices and mixing them up with crimes. I’ll proudly cop to that.

Third, Ezra’s obsession with Woody Allen’s supposedly obvious guilt has twisted “Magic in the Moonlight,” and all of Allen’s oeuvre, out of all recognition. We’re told in the lede that Woody Allen should’ve “quit while was ahead,” which was several years ago. Wait a minute, didn’t his last film (“Blue Jasmine”) get nominated for several Oscars? Wasn’t it widely acclaimed as the best narrative rendition of the Madoff scandal? Even if “Magic in the Moonlight” is as awful as Ezra says, it’s hardly a losing streak.

And it’s not really as awful as all that. It is a slight film, derivative of other Woody Allen philosophical ruminations on the absence of God/morality/meaning. “Crimes and Misdemeanors” is the best of these; “Match Point” and “Cassandra’s Dream” in the middle; “Scoop” toward the bottom end. Unlike those other films, it blends the philosophizing with a Romantic European Location, a la “Midnight in Paris,” and, yes, a May/December — really more like an April/October — romance between Colin Firth and Emma Stone.

The film works better as a parable than as an actual story. Firth’s character, Stanley Crawford, abandons a lifetime of skepticism in an instant, with nary a traumatic tear in sight. Supporting characters are cartoonish sketches. The romance is hokey and unbelievable — at one point, our heroes stumble into an open, but unattended, giant telescope that one just happens to have visited before.

As a parable, though, “Magic in the Moonlight” is an interesting one. Its climax is Allen’s longest exploration of the theodicy theme since Martin Landau’s speech in “Crimes and Misdemeanors.” Only this time, it’s a soliloquy by Colin Firth’s character, who tries to pray to God to save his beloved aunt, who has been in a traffic accident. It’s a remarkable moment – the skeptic suddenly trying to pray.

And then it turns. “I’ve never felt so ridiculous in all my life!” Crawford explains. And suddenly, he realizes why people fall prey not only to magic tricks but to religion as well. He has been in the emotional trenches, and lost his atheism – only to regain it by perceiving exactly how desperate we are for something to make sense. He sees how badly we want to believe in the supernatural – and in that moment, he sees through it.

This is an audaciously atheistic nihilism. At precisely the moment when so many people report conversion experiences, Allen’s protagonist realizes it’s all a con.

But Allen doesn’t leave us there. Crawford does not go back to his earlier cynicism, because he finds a substitute for God: love. Falling in love with Stone’s character, he sees how the manifest world can be enlivened even if there is no life after death, no supernatural plane, no God.

Yes, this revelation is occasioned by a forty-something falling for a twenty-something. Yes, it’s a little unbelievable and a little weird. But I am not going to condemn it as Ezra does. Quite the contrary: in this flawed film, as in several others, Allen shows the redemptive possibility of an unconventional, cross-generational love — one which, we imagine, he has enjoyed in the seventeen years (!) he has lived with his wife.

Not only do I not find that repellent, I find it inspiring.