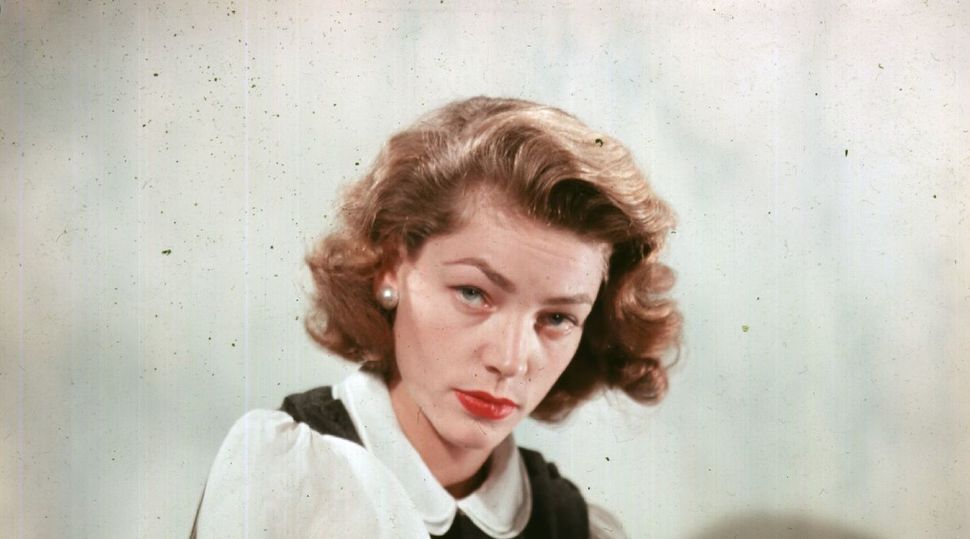 Whistling Past the Anti-Semites: Lauren Bacall, seen here in 1951, died on August 12 at the age of 89. Image by Getty Images

For all her onscreen boldness and teaching-Bogie-how-to-whistle bravado, actress Lauren Bacall, who died on August 12 at age 89, spent a good part of her career timorously trying to dodge Hollywood anti-Semitism. Born Betty Joan Perske in the Bronx, she would later adopt an altered version of her Romanian Jewish mother Natalie Weinstein-Bacal’s name, because experience had taught her it was practical to do so. In her 2006 memoir “By Myself and Then Some” Bacall recounts how as a teenage model, after she informed a colleague that she was Jewish, she was fired. This prejudicial treatment baffled her: “I’ve never really understood it, and I spent the first half of my life worrying about it.”

The wider world’s anti-Semitism was particularly shocking given the warmly nurturing Romanian Jewish atmosphere she was brought up in. Later in the same book, she declares: “Going back through my life until now, the Jewish family feeling stands strong and proud, and at last I can say I am glad I sprang from that – I would not trade those roots – that identity.” Yet when she first arrived in Hollywood under contract to director Howard Hawks, as she told the New York Times in 1996,, she didn’t tell Hawks she “was Jewish, because he was anti-Semitic and scared the hell out of me…He made me so nervous so I didn’t say anything. I was cowardly, I must say. I was not proud of myself.” Fortunately for fans for on- and off-screen romance, after she fell in love with Humphrey Bogart, she did broach the subject, telling People Magazine in 1979: “I had once been asked out by a West Point cadet and the subject of religion came up. He never called back, and I was sure it was because I was a Jew. So when I fell in love with Bogie, I knew I had to damn well get it straight. Of course, he was the last man on earth it would have bothered.” Still, when “To Have and Have Not” (1944) premiered, making her a star, studio publicists claimed that Bacall was the “daughter of parents who trace their American ancestry back several generations,” forgetting that her mother went through Ellis Island like so many other Jewish immigrants.

And so it went. As a sultry blonde, Bacall was known by an inner Hollywood circle to be Jewish, although she never played one explicitly onscreen, even when she was cast as Barbra Streisand’s mother in “The Mirror Has Two Faces.” (1996). Perhaps Bacall’s Yiddishkeit is best reflected in her firm ethical principles, willing to embrace a minority viewpoint if she felt it was right. As she told Larry King in 2005, she was an “anti-Republican… A liberal. The L-word. Being a liberal is the best thing on earth you can be. You are welcoming to everyone when you’re a liberal. You do not have a small mind.”

Signs of her non-small mind included protesting the HUAC anti-Communist witch-hunt, and on a personal level marrying two of show business’s most energetic drinkers and hellraisers, Humphrey Bogart and Jason Robards, both not coincidentally also inspired actors and mensches. Choosy about screen roles, she opted for offbeat characters like a lesbian villainess in “Young Man with a Horn” (1950) who leaves Kirk Douglas for another woman. Refusing kitschy publicity stunts such as posing in cement at Grauman’s Chinese Theatre, she instead selected thinking parts, such as a mental health counselor in “The Cobweb” (1955) and a similar medical role, although this time a baddie, in “Shock Treatment” (1964). She frequented Broadway when film roles were scarce, and having seen her in Broadway farewell, “Waiting in the Wings,” (1999) I can say that her stage presence remained unusually powerful for a screen star, even later in life.

Never ingratiating to power for its own sake, she was politely enthused in 1984 when her first cousin Shimon Peres was elected Prime Minister of Israel, since he hailed from her estranged father’s side of the family, the Perske’s, whom she had shunned for decades. She later visited Peres in Israel on a social visit, perhaps as a gesture of reconciliation. Bacall never needed to reconcile with her generations of ardent fans, who rightly admired her for nearly 70 years as the epitome of a strong-minded, independent woman.