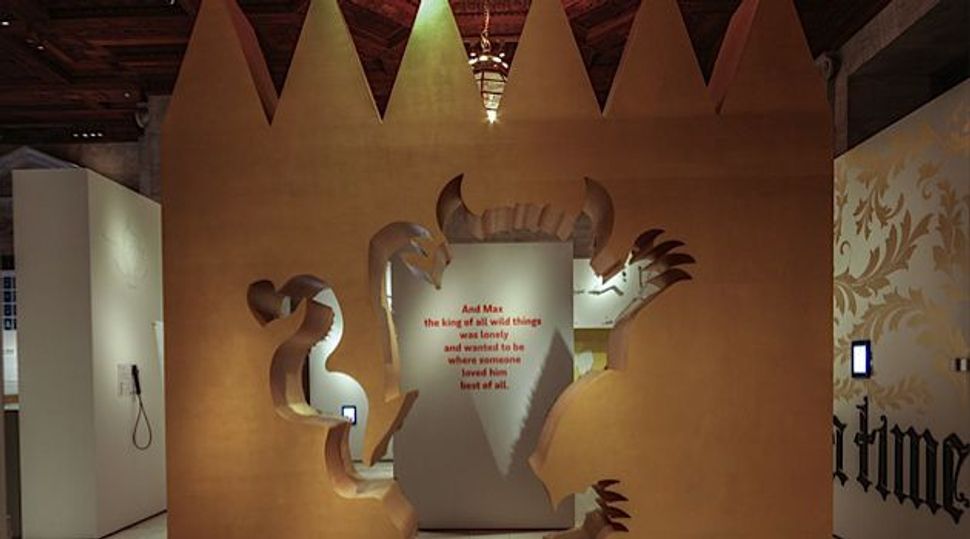 Let the Wild Rumpus Start: ‘The ABC of It: Why Children’s Books Matter’ runs until September 7 at the main branch of the New York Public Library. Image by Jonathan blanc/nypl

‘It’s a pattern really. So many of the progressive writers and illustrators of children’s books were Jews,” says Leonard Marcus, who does not usually concern himself with the old parlor game of counting famous Jews. Marcus is curator of the New York Public Library’s exhibit on children’s literature, “The ABC of It: Why Children’s Books Matter,” which will conclude its run of over a year on September 7. It has attracted more visitors than any other exhibit in the library’s history.

The gallery spaces tell the history of children’s literature while giving the visitor the feel of walking into a children’s book. Marcus got this design idea from the children’s classics “Goodnight Moon” and “Where the Wild Things Are,” books that have a way of inviting children to enter the imaginary spaces they describe. The exhibit contains a wealth of anecdotes and artifacts from literary history. You’ll discover there, for example, the original Winnie the Pooh, Piglet, Eeyore, et al. — the actual stuffed animals belonging to Christopher Milne, son of author A.A. Milne, who wrote stories about them — and a handwritten letter in purple ink from Lewis Carroll to his friend Alice Liddell, who inspired him to write Alice in Wonderland.

Marcus explains that Jews from immigrant families in many cases found their way to the field of children’s literature because other artistic fields were closed to them.

“The culture of childhood is often considered a rung below,” says Marcus, who teaches a course in children’s literature at New York University alongside a child psychologist. “Even child psychologists are sometimes treated like second-class citizens by their peers.”

Children’s authors and illustrators like Tomi Ungerer and Maurice Sendak shared a sense of persecution and alienation as Jews, Marcus speculates. Ungerer, author and illustrator of adored children’s books like “Crictor,” lived under the Nazi occupation of Alsace-Lorraine before immigrating to the United States; Sendak grew up in Brooklyn at a time when Jews feared local anti-Semitism. His mother dressed him up meticulously when he was a child in the Bensonhurst neighborhood of Brooklyn, Marcus says, so as to be beyond the reproach of anti-Semites. It seems that in part it was insecurityabout their lives as Jewish immigrants that drove them to take refuge in the outsiders’ realm of children’s literature, and that perhaps also drove them to work to legitimize their outsider art in the cultural mainstream.

“He had a vision of children’s books,” Marcus says of Sendak. “It was really transformative of the field. It was because of him more than anyone else that people began to see children’s art as art.” Sendak’s New York Times obituary describes him as “the most important children’s book artist of the 20th century, who wrenched the picture book out of the safe, sanitized world of the nursery and plunged it into the dark, terrifying and hauntingly beautiful recesses of the human psyche.”

“He was the one who brought the picture book into the Freudian age,” Marcus says. “He opened up the emotional territory of the picture book, showing anger and deep feeling of all sorts. Little children have all these feelings but can’t verbalize them.” In “Where the Wild Things Are,” Sendak’s pictures gradually replace the words in order to depict a journey into the unconscious, “the place for which there is no words,” as Marcus puts it. Artists like Sendak, with their celebration of the child’s inner devil, helped children’s literature in its long departure from the puritanical didacticism of its origins.

Shel Silverstein, author and illustrator of classics like “The Giving Tree” and “The Missing Piece,” “did not conform to the stereotype of the children’s book author,” Marcus says. Kids may remember Silverstein’s provocative author photo showing him bald, bearded, barefoot and playing a guitar — in pointed contradiction of the average librarian’s expectations of what a children’s writer should look like. Silverstein worked for Playboy magazine, and his children’s stories sidled up to real emotional topics like rage, ambition and despair.

“The Phantom Tollbooth,” which Marcus has described as the closest thing we have in America to “Alice in Wonderland,” was written and illustrated by a pair of Brooklyn Jews named Norton Juster and Jules Feiffer. They happened to live in the same brownstone at 153 State Street and met because Juster so annoyed Feiffer with his pacing that it compelled Feiffer to confront his upstairs neighbor. Like William Blake before them, Juster and Feiffer saw children less as beings in need of education and more as repositories of wisdom and wonder who have the power to restore order to the world.

If it seems ironic that Jewish outsiders and mavericks should seek order, or that they should succeed in attaining it, it also reflects a notion fundamental to modern psychology: that we must get comfortable with our demons in order to live reasonably with them. “Stories give a structure to the chaos that everybody is living through,” Marcus says. “There were all these Jews who were doing maverick children’s books and they did a lot to make children’s books more psychologically real.”

“But it wasn’t always the writers who did it,” Marcus adds. “Sometimes it was the publishers.” Dick Simon and Max Schuster started a publishing firm when they graduated from Columbia and had difficulty finding work. Their firm, Simon and Schuster, went on to revolutionize children’s literature with progressive titles like “Pat the Bunny” and with their affordable Little Golden Books series which helped spread children’s literature into many more households than ever before.

In many ways, the involvement of Jewish immigrants with children’s literature belongs to the story of the 20th century, but perhaps the ancient experience of the wandering Jews prepared them to write for children a long time ago. As Marcus says, the Passover Seder is a storytelling endeavor “for the benefit of children more than anybody else.” One wonders respectfully if most Hagaddahs couldn’t be improved by a little of Sendak’s brevity and cleanness of line; Bible stories, on the other hand, perhaps anticipate modern children’s tales The precarious homelessness of the ancient Jews seems to have focused their attention on the needs and experience of children as fragile links between one generation and the next. As Sendak knew well, nobody is apt to feel so precarious as a child — not even a Jew.

Austin Ratner is the author, most recently, of “In the Land of the Living,” published by Reagan Arthur Books.