It’s Getting Harder To Get Kicked Out of Hebrew School 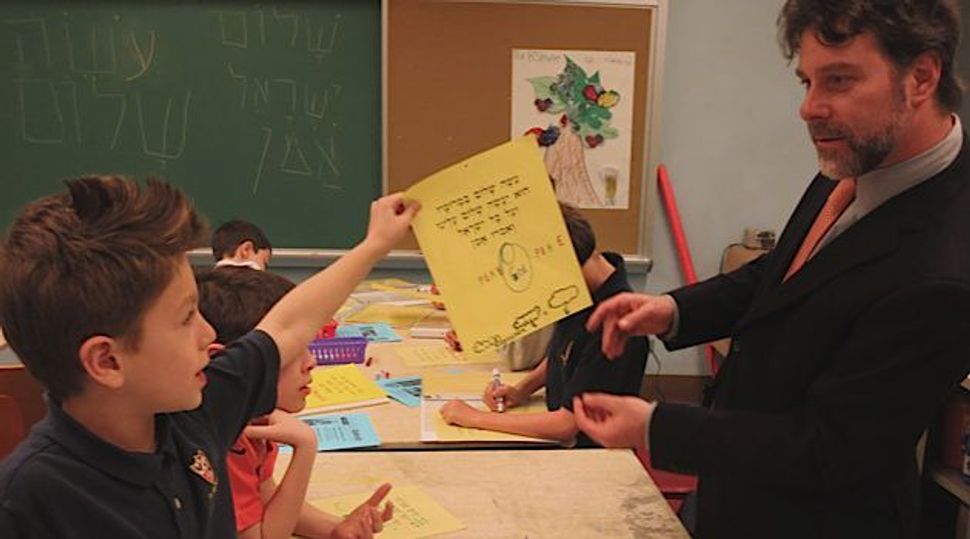 For Nadine Epstein, it was a piece of gum she spat out… right into her teacher’s face.

For Sharon Feder, it boiled down to pesky questions about the nature of the universe.

And for Atarah Derrick, it was the storyboard of The Romantics’ song “Talking in Your Sleep” that teachers found lodged in her notebook.

All of these events, close to 20 years apart, resulted in the students getting kicked out of Hebrew school or being asked to leave.

At one time, such stories of Hebrew school horrors were common and provided writers from Philip Roth to Shalom Auslander with raw material. But some say they are a thing of the past.

Among members of the millennial generation (those born roughly between 1980 and 2000) it is rare to find a Hebrew school student who has been kicked out. According to Cyd Weissman, director of innovation in congregational learning at the Jewish Education Project, a New York City-based think tank, “If you are talking about people in their 40s or 30s and [older] you may hear that story.” Now, however, discipline is less strict. “We once lived in a world where teachers hit you with a ruler,” Weissman says. “We no longer live in a world where a child must fit into a [rigid] school order.”

Today, it easier than ever for students to find progressive Hebrew schools that strive to engage and entertain while they educate. And though the statistics aren’t conclusive, they suggest that Hebrew school attendance is on the rise. Fifty-nine percent of Jewish children attend “formal Jewish education programs aside from day school,” according to a 2013 study on Jewish Americans by the Pew Research Center. The research wasn’t conducted on the same population, but by any measure that percentage would constitute a jump over similar data collected for The National Jewish Population Survey of 2000-2001, which reported that only 24% of children were enrolled in “part-time Jewish programs that met more than once a week.”

Today’s Hebrew schools are different from the one Epstein attended in Asbury Park, New Jersey, in 1970. She remembers standing in front of the classroom and listening as her teacher demanded that she spit out her gum. Epstein did as she was told and watched in shock as it landed squarely on her teacher’s face. Sobbing, her teacher fled the classroom and fetched the principal. Within a day, Epstein had been kicked out of Hebrew school.

Epstein was delighted. An excellent student in public school, she did not enjoy the rote memorization that Hebrew school required. Her teachers didn’t ask intellectually stimulating questions, and her attachment to Hebrew and Judaism suffered as a result.

Attending an Orthodox Hebrew school in Montreal in the 1980s, Atarah Derrick also had trouble seeing the relevance of Hebrew school to everyday life — which for her consisted of going to grade school, watching music videos and playing with Barbies. She was frequently loud, and interrupted lessons she found boring and bland. The last straw was when her teacher found The Romantics storyboard in her notebook. Derrick’s parents were called, and she was asked not to return.

Five years later, in 1987, Sharon Feder had a similar experience at a Hebrew school in Irvine, California. Persistently inquisitive, she frequently peppered her Hebrew school teacher with serious questions about metaphysical issues like predestination. Her teacher’s answer — “Don’t worry about it” — proved unsatisfactory. Eventually, the teacher asked Feder to leave. She continued her Hebrew education with a private tutor.

Feder was kicked out for being too curious. The current generation of Hebrew school students, by contrast, is having an easier time finding teachers who reward, rather than condemn, inquisitiveness. Mia Clateman, 7, from Port Washington, New York, said in an email from her mother’s account, “I feel comfortable about asking questions. If I needed extra help, the teachers would give it to you because they are really nice.”

Hebrew schools are working harder than ever to keep students engaged and entertained while taking a less strict approach to discipline. Out of self-interest as much as pedagogical principle, teachers and administrators are trying to adopt some of the tactics of other Jewish educational organizations, like camp or Birthright trips to Israel. Instead of sitting in a classroom for the eighth hour of the day, students are “in soup kitchens, they’re taking video cameras to malls and interviewing people,” Weissman said. “It’s not a question of kicking out, but how to engage the heart and soul.”

Now, there are many new programs that spice up Hebrew school life by taking Jewish education out of the classroom and into the larger community.

Rachel Rubin, 14, of Mamaroneck, New York, experienced Hebrew school in class, but also in her classmates’ houses and even in the supermarket on excursions to learn about kosher food. When she was old enough, she was given the choice to control her own schedule and select lessons she was most interested in. To prepare for her bat mitzvah, Rubin Skyped with a Hebrew teacher for 20 minutes at a time in a series of one-on-one sessions.

The Jewish Journey Project, founded by Rabbi Joy Levitt, allows children to enroll in courses that take them on trips to different Jewish neighborhoods in the New York City area. This supplements but does not replace their time at synagogue. Children can tag along on as many excursions as they like. According to Rabbi Lori Forman-Jacobi, director of JJP, “We believe it is about the journey, and no two kids’ journeys are the same.”

Hebrew schools have worked on turning academic lessons into something students find useful in their own lives. Laurie Landes, the education director at the Community Synagogue of Rye, New York, has made relevancy a priority. For example, when she teaches the biblical text about Abraham welcoming strangers, she opens up a discussion about how the children treat new kids in their class, bunk or team.

That’s not to say millennials in Hebrew school can’t be bored, act out or feel disconnected from the material. According to the 2013 Pew Study, for students age 10 to 15, attendance in Jewish education drops from 24 to 7%. Clearly, post-b’nai mitzvah dropouts are still common, but Hebrew schools are doing their best to keep their students engaged past age 13.

At Temple Emanu-El in Manhattan, for example, teenagers are brought into Hebrew school classrooms to act as role models and mentors for younger kids. As Saul Kaiserman, the temple’s director of lifelong learning, said, “Teens are excited and engaged in the classroom. [The kids can see] it’s not just old people like me.”

Rabbi Jodie Siff from the Reconstructionist Synagogue of the North Shore in Long Island, New York, structures her congregation’s educational program around community building. Class composition varies. There are classes where all the children are the same age, but also multi-age groupings, such as a “prayer buddies” class that pairs second and sixth graders.

Scheduling is another hurdle for Hebrew schools, which have traditionally asked students either to get up early on a Sunday morning or schlep to Hebrew school after a long weekday at secular school. Neither option is particularly appealing to kids who may also juggle sports, an instrument and homework. Many students feel like they just need a free hour to socialize, and sometimes Hebrew school becomes that hour, according to Rabbi Koller-Fox, the founder and president of the Coalition for the Advancement of Jewish Education.

In terms of discipline, today’s schools are more willing to work with parents to curb their students’ disruptive impulses. Landes said that her congregation developed an independent study track to provide “an individualized learning alternative [to] accommodate learners who may not be able to thrive in a classroom model.” Rabbi Siff isn’t afraid to bring parents into the classroom to address behavioral problems and facilitate communication.

And it turns out that at least some of those who grew up bored and frustrated with the Hebrew school education of the ’70s and ’80s have nonetheless remained connected to Judaism. Many years after Atarah Derrick was kicked out of Hebrew school, she visited Israel for work, and came to appreciate her Jewish background. She even made aliyah.

Nadine Epstein, too, has come a long way from her brief stint as a gum-spitting, Hebrew-school hating, juvenile delinquent. She now works as the editor and publisher of Moment Magazine, where she devotes her life to writing about Jewish life and thought.

Rachel X. Landes is a summer fellow at the Forward. Contact her at [email protected]

It’s Getting Harder To Get Kicked Out of Hebrew School