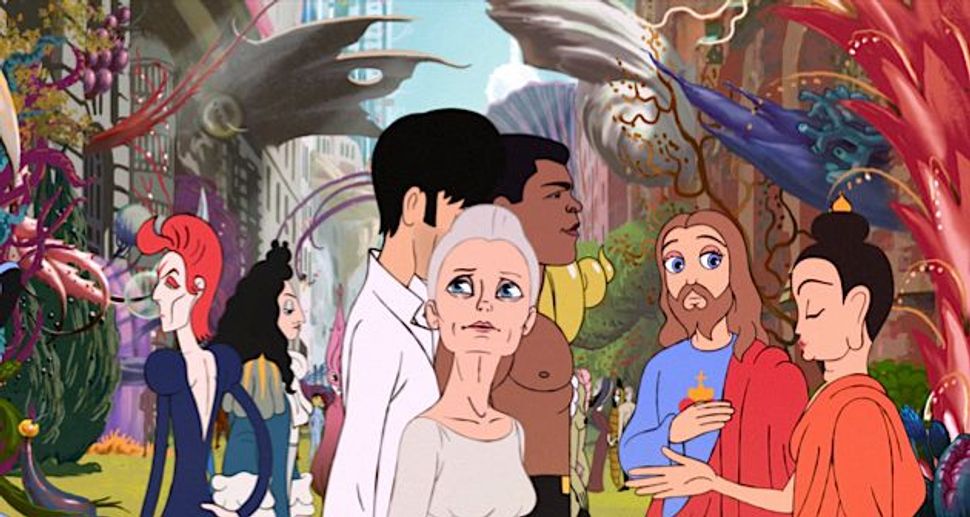 Heavenly Delights: Actress Robin Wright wakes up in a landscape straight out of Hieronymus Bosch. Image by Courtesy Drafthouse Films

Is it better to live a happy life of fantasy or to be unhappy knowing the truth? Are the choices we make truly free, or do social pressures coerce us? If you could choose to be someone else, would you rather be Jesus Christ or Ron Jeremy?

These questions roll around like a bag of loose marbles in “The Congress,” a part-live action, part-animated movie about a washed-up actress who unwillingly ushers in a brave new world of drug induced entertainment. Directed by Ari Folman and starring Robin Wright as a fictional version of herself, “The Congress” is a brilliant spectacle and a chaotic sci-fi story, an exhilarating visual extravaganza and a slapdash thought experiment. It is also unlike anything I have ever seen.

Folman, 53, is the director of “Waltz With Bashir,” the groundbreaking 2008 animated documentary about his experience as a soldier in the Israel Defense Forces during the 1982 Lebanon War. “The Congress,” which is roughly based on “The Futurological Congress,” a 1971 novella by Polish science fiction writer Stanislaw Lem, departs from that personal and historical territory. But in addition to the part-digital, part-traditional animation techniques invented for “Bashir,” and a hypnotic soundtrack by Max Richter, “The Congress” shares similar concerns with memory and consciousness, subjective experiences and objective fact. Only here the setting isn’t war-torn Beirut, but a hallucinatory future in which psychotropic good times have supplanted reality itself.

At the outset of the movie, Wright’s agent, Al (Harvey Keitel), and Jeff Green (Danny Huston), a sleazy executive of the wryly named Miramount Studios, are trying to convince Wright to accept a contract they say will be her last: to be scanned by the studio and turned into a digital character for the next 20 years.

It is, Green explains, the end of an era. From now on, all characters will be portrayed not by real actors, but by their indistinguishable digital counterparts. Meanwhile, Wright is preoccupied with the future of her daughter, Sarah (Sami Gayle), and son, Aaron (Kodi Smit-McPhee), who suffers from Usher syndrome, a genetic disorder that is robbing him of his hearing and sight. Reluctantly, she agrees to the deal.

Twenty years later Wright is one of the biggest movie stars on the planet for her role as “Rebel Robot Robin, Street Fighter,” a heroine who battles for the rights of robots. This isn’t Wright herself, of course — it’s her digital avatar, which is owned by Miramount. But thanks to her celebrity, and to the fact that her contract is up, she is invited to speak at the Futurist Congress, a gathering held by the studio at the Abrahama Hotel, inside a “restricted animated zone.”

The phrase “restricted animated zone,” though silly, isn’t the biggest problem with “The Congress.” The excessive length of the live action section — a tedious first act that takes up an entire third of the movie — is a worse flaw, and it makes the story as a whole feel unbalanced. But the phrase is typical of the film’s confusing depiction of its imagined future, even if that confusion is fitting for what may be a series of nested hallucinations.

Within the world of the movie, the Futurist Congress isn’t animated, exactly, but chemically manipulated to appear animated. Here reality is colored by hallucinogens of immense sophistication, drugs that enable their users to experience, and to be experienced, however they like.

It is “the era of free choice,” as the head of Miramount announces to a cheering throng, and “the big chemical party,” as another character, a digital animator voiced by Jon Hamm, puts it later on. It is a technology that makes even digitally created actors obsolete. In her contract renewal, Wright agrees to be rendered in chemical form so that anyone can “be” her, whenever and however they want. It is the ultimate distillation of celebrity, entirely divorced from art.

Lem, who wrote dozens of novels, stories and nonfictional works, was one of the greatest — if perhaps most underappreciated — science fiction writers of the 20th century. Today he is best known for “Solaris,” a brooding 1961 novel that was adapted by Russian director Andrei Tarkovsky in 1972 and again by Steven Soderbergh in 2002. In “Solaris” Lem depicted humanity’s failed attempt to understand a strange form of extra-terrestrial life, and the futility of all such anthropocentric endeavors.

“The Futurological Congress,” though equally pessimistic about human prospects, provides a more humorous take on the future. It presents a world governed by drugs with names like hedonidol, euphoril and felicitine, and in which war is waged using “LTN” or “Love Thy Neighbor” bombs. Even acts of violence and revenge are sublimated into chemical form.

Many of these elements show up in “The Congress,” including the LTN bombs, if you look closely. But the movie isn’t a direct adaptation of Lem’s novella. Instead of an aging movie star, Lem’s story features the cosmic adventurer Ijon Tichy and jumps off from an academic gathering in Costa Rica convened to solve the problems of overpopulation and resource depletion, not the next wave of 3-D cinema. Still, the wacky animation of Folman’s film, along with its wild flights of imagination, captures the playful spirit of Lem’s comic dystopia and at least some of his more colorful ideas.

In contrast to the hi-resolution sheen of Pixar movies, or the visual feats of CGI hybrids like “The Lord of the Rings” or “Avatar,” “The Congress” takes its cues from the hand-drawn style of Fleischer Studios, home to characters like Popeye and Betty Boop.

At the same time, it incorporates a kaleidoscope of visual influences, from the whimsical psychedelia of “Spongebob Squarepants” to the fever dreams of Satoshi Kon. When Wright first enters the “animated zone,” she is surrounded by rainbow oceans and cuddly sea creatures straight out of a Lisa Frank catalog, while the little robot butlers at the Abrahama Hotel bring to mind the DMT-fueled “self-transforming machine elves” described by New Age guru Terence McKenna.

Like Lem’s novel, “The Congress” follows a head-over-heels structure once the live-action introduction gives way to the animated headspace of Abrahama. When the hotel is attacked by guerillas rebelling against the chemical future, Wright suffers from “irreversible hallucinogenic poisoning” and is cryogenically frozen until her condition can be cured. When she wakes up, she is led through a landscape straight out of Hieronymus Bosch’s “Garden of Earthly Delights,” populated by Jesus and Picasso (rendered in a cubist style, of course), Confucius and a little Ron Jeremy.

This cornucopia of visual stimuli succeeds in re-creating the hallucinogenic experience it portrays, even if it doesn’t offset the weaknesses of the script. In its voyage from live-action prologue to animated congress to post-congress dystopia, the movie hops from one plot point to another, introducing themes and ideas only to drop them later on. And for a film that seems to critique the Hollywood studio system, it’s ironic that it tries to accommodate both a romantic subplot and a family drama, neither of which fits comfortably in the whole.

Still, watching “The Congress” will likely make you feel like you inhaled some of those futuristic drugs yourself, or wish that you did. (When I first saw the film, at the New York Jewish Film Festival, the audience was visibly shocked.) And in a world of hyper-targeted, immaculately constructed sci-fi flicks, it’s actually nice to have one that’s full of baffling detours and loose ends.

As to the movie’s central question, if I had the option of living in a rainbow world where a bowl of gruel became fresh lobster and the waiter serving it to me was Michael Jackson? I’m not so sure I would say no.