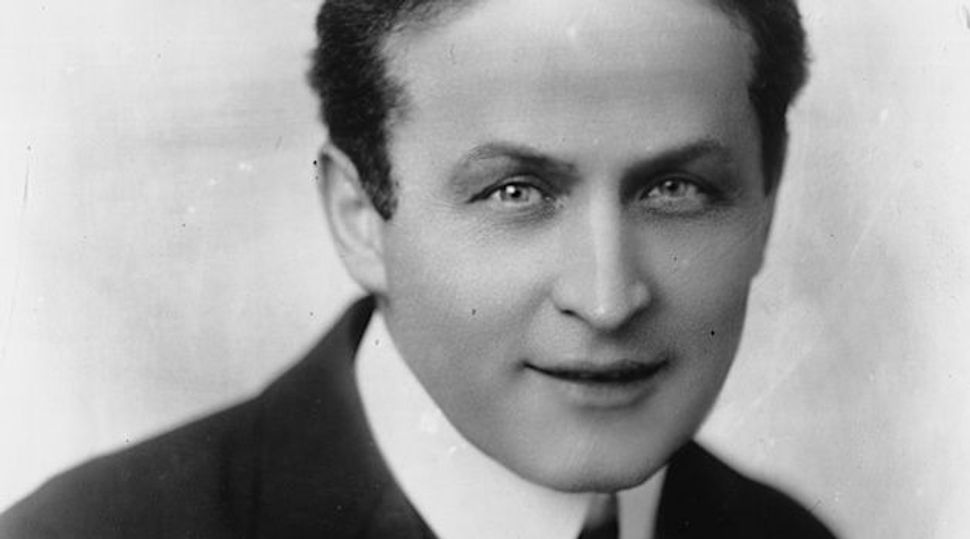 Defiant: The father of Houdini, né Ehrich Weiss, pictured here in 1900, was a failed rabbi who worked in a necktie sweatshop on the Lower East Side. Image by getty images

My father, a New York psychoanalyst, wrote about the sons of passive or absent fathers. (There was doubtless a reason why they interested him.) Among his many elegant papers and monographs, covering such (seemingly) disparate characters as Bishop James Pike and Antoine de Saint-Exupéry, are two published full-length biographies, one of Joseph Conrad (whose father vanished into exile) and one of Harry Houdini, né Ehrich Weiss, whose Hungarian father, a failed rabbi, wound up his anonymous life in a necktie sweatshop on the Lower East Side.

There are many biographies of Houdini. Some chronicle his achievements; others explain his tricks, but to my knowledge only “Houdini: A Mind in Chains,” by my father, Bernard C. Meyer, M.D., attempts to explain why the great escape artist did what he did.

Almost three years ago when my friend, producer Gerry Abrams, approached me about doing a life of Houdini, I drew his attention to my father’s book, which looked at the magician from this very different perspective. There have been endless abortive attempts to make a film or television “limited series” about Houdini, but aside from the charming and very sentimentalized Tony Curtis version, few appear to have reached a screen of any size or shape.

That this one did may be largely due to Abrams, who optioned my father’s book. Abrams and I had endless meandering conversations about this driven man, his motives and his times, and we presented our approach to the History Channel and Lionsgate Films, both of whom signed on. Now “Houdini,” for which I wrote the screenplay, airs September 1 and 2 on the History Channel.

Houdini was intent on rejecting the life his father settled for — living as though he was never alive. An encounter with a traveling magic show in Appleton, Wisconsin, and the chance discovery of the memoirs of Robert Houdin, a French illusionist, supplied Houdini with the inspiration and the means to shape his destiny. It was this rage to prove he existed that seems to have prompted many if not most of his actions, his repeated re-enactments of death and resurrection, in which, as he keenly understood, audiences shared his fears and desires to defy mortality.

This insight, to be sure, was not where Houdini started, but rather where he wound up. As a magician, he began, conventionally enough, with variations on the popular illusions of the day. It was more or less by accident that he stumbled upon extrication as entertainment, converting the hitherto taboo subject of bondage into wholesome family fare.

There is unsubstantiated speculation that he also toiled in the clandestine world of espionage on behalf of the United States and Great Britain. Like so much of his mythopoesis, the Italian expression se non è vero è ben trovato (“even if it is not true, it is well conceived”) seems to apply.

Uli Edel, director of such stirring films as “The Baader Meinhof Complex” and “Last Exit to Brooklyn,” was an eager convert to all things Houdini. His indefatigable zeal for Houdini’s world, the details of vaudevillian life, and the specifics of recreating the tricks, soon made Edel a Houdini expert in his own right.

John Gaughan, builder of illusions for such modern masters as David Copperfield, has a wonderful collection of Houdini memorabilia that he was pleased to show us — the great man’s steamer trunk, his Chinese Water Torture cell, and assorted handcuffs employed by the prisoner no chains could hold. Edel couldn’t get enough.

There are many moving parts to a movie and in some respects even more to a television show. There were many inevitable compromises, some due to schedule, some to budget, still others to the Hungarian censor.

There were two good reasons to shoot the movie in Budapest. Firstly, it made economic sense (all films try to shoot where their dollars will stretch farthest), and secondly, Budapest probably has more legitimate theaters than any other city in the world. Houdini was first and foremost a vaudeville performer, so much of any film devoted to his life will wind up taking place in theaters.

But of course there are limits to what even the most promising location can provide. Budapest is nowhere near any ocean, and CGI versions of scenes that required ocean liners and New York City docks were prohibitively expensive.

Nonetheless, it is stunning to see how much of the world production designer Patrizia Von Brandenstein and her team were able to create and how convincingly they simulated different eras of Houdini’s life.

The fireplug-sized magician was born in 1874 in Hungary, and died in Detroit in 1926. He spent his life literally on the road, traveling with his daredevil escapes to every corner of the planet.

The miniseries, which is four hours long and spread over two nights, was alloted just 48 days of shooting — a backbreaking schedule. A 50-day shoot is not unheard of for a single studio feature; “Houdini” was the equivalent of two feature films, done in period style, which always complicates matters. (Try getting horses to hit their marks!)

Of course it was not possible to shoot everything I’d written, and many scenes were dropped. Some I didn’t miss; they probably would have wound up on the cutting room floor anyway, while the loss of others leaves me inconsolable.

There is always a gap between the imagination of the screenwriter and the finished film. For that matter, there is also a gap between what the director plans and what is finally achieved. (Asked what he thought when he watched one of his plays on the stage, the Irish playwright John Millington Synge was said to have answered, “I sit in the box and curse the actors.”)

But it is also true — if inarguably less common — that the collaboration, the meshing of all those moving parts and variables, sometimes results in something infinitely superior to the most vivid hopes and dreams of those who created it.

Watching the finished “Houdini,” I am hard-pressed to contain my wonder at all that is on the screen.

I’m sure my father would have felt the same.