The Wonder Women of Video 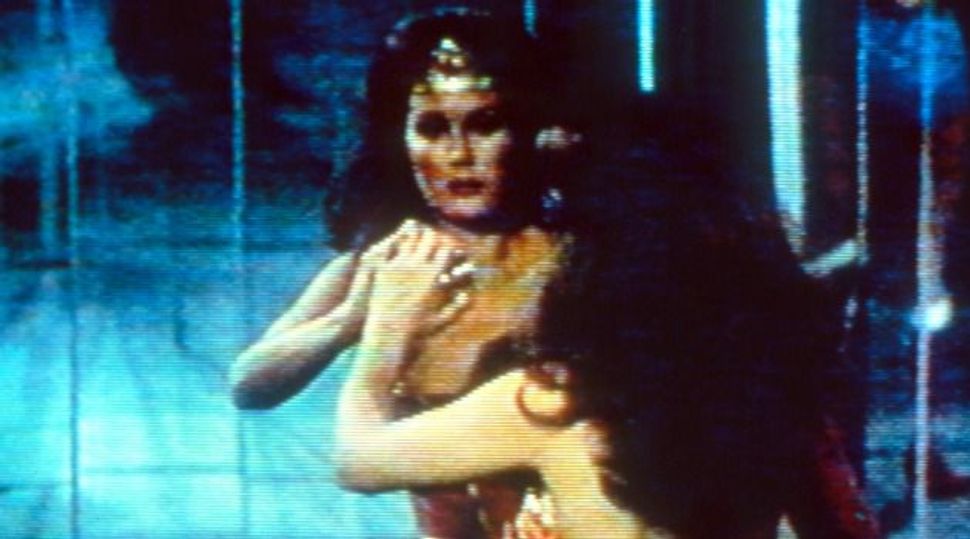 Super Powers: No Wonder Women were harmed during the making of this film. Image by Dara Birnbaum

Nowhere, perhaps, is the distinction between interior and outside space more pronounced than in Edgar Allan Poe’s “The Masque of the Red Death.” Prince Prospero and his privileged colleagues hole up in “the deep seclusion of one of his castellated abbeys,” which is decorated with the prince’s “eccentric yet august taste.” The outside world, plagued by the Red Death, “could take care of itself,” Poe writes. All sorts of pleasure “and security were within. Without was the ‘Red Death.’”

No masked corpses traipse through the 18th-century German castle Schloss Ettersburg in Janaina Tschäpe’s 2004 film “Lacrimacorpus,” but the artist, who was born in Munich in 1973, clearly meant to address outside ugliness permeating and contaminating beauty within. The castle, which housed dignitaries like Goethe, overlooks the concentration camp Buchenwald.

The film’s title refers to a mythical creature that, when captured, melts into tears and bubbles. The dancer in “Lacrimacorpus” wears a dress, a large bonnet suggestive of E.T. and a ring of balloonlike bubbles around her neck. She twirls for a few minutes in the castle parlor before collapsing on the floor. Outside is the shadow of the crematorium; inside, death has gained its foothold.

“Lacrimacorpus” is one of 10 works on exhibit in “Total Art: Contemporary Video,” on display through October 12 at the National Museum of Women in the Arts, in Washington, D.C. The show claims that women video artists were able to innovate in the 1960s and ’70s partly because of the medium’s “accessibility and ease of use.” Although other exhibits have focused on works by women video artists, this exhibit suggests that those artists’ larger contributions haven’t been studied sufficiently.

Seeing “Total Art” is reminiscent of visiting interconnected black box theaters of varying sizes. The merits of trekking to a museum to view short films that one can track down on YouTube might be debatable, but there’s something unexpected about arriving in the middle of a video’s loop and navigating the confusion and disorientation that inevitably follow. And at a certain point, the videos — simply because they all share the same gallery space — are set into dialogue with one another, inviting comparisons and contrasts, but also unifying them all.

The exhibit’s contention that women artists pioneered the video art medium because the tools were so accessible seems consistent with what Snowden Becker, program manager for moving image archive studies at University of California, Los Angeles, has learned. “Women have had a leading role in the video-art community from its very beginning,” she said.

According to Becker, “simple timing” may be responsible. In the late 1960s, the launch of “portapaks” occurred conterminously with the rise of feminism. “Portapaks were self-contained systems that allowed one person to bring everything they’d need to capture video — power supply, camera, microphone and tape recorder — in pretty much any location that was humanly accessible,” Becker said. “When the apparatus for artistic creation becomes something one person can control, that eliminates many barriers to production; all you need is access to the tools.”

Since video was still being conceived at the time as an artistic medium, “men didn’t have any kind of head-start on women when it came to making, shaping or establishing what counted as video art,” she said.

That ease of use also created opportunities for Jewish women. Dara Birnbaum’s film “Technology/Transformation: Wonder Woman” (1978–79), which is part of the NMWA exhibit, depicts a twirling woman who turns — after an explosion — into the DC Comics superheroine. No Wonder Women appear to have been harmed in the making of the film, but viewers may be a bit confused by the sequence. A woman morphs into Wonder Woman, and then turns back into a woman (presumably the superheroine’s alter ego, Diana Prince); the figure then becomes Wonder Woman again (defending a male acquaintance, with her arms, from bullets from an unknown source), before the film fades into a barrage of explosions and a blue screen with text.

Michal Rovner’s contribution to the exhibit is titled “Data Zone, Cultures Table #3” (2003). Six petri dishes sit on a steel table. Upon closer inspection, tiny human figures are revealed, projected onto the petri dishes. A NMWA publication characterizes their movements as “reminiscent of Hollywood musical productions or a ritualistic dance.” Whether that’s accurate is subject to debate; some might find it more evocative of the movements of insects, which is very unsettling when one recognizes that the figures are human. Undoubtedly, though, this kind of work is one of many realms where video art charts provocative new ground.

Menachem Wecker is the co-author, with Brandon G. Withrow, of the recent book “Consider No Evil: Two Faith Traditions and the Problem of Academic Freedom in Religious Higher Education” (Cascade Books).

The Wonder Women of Video