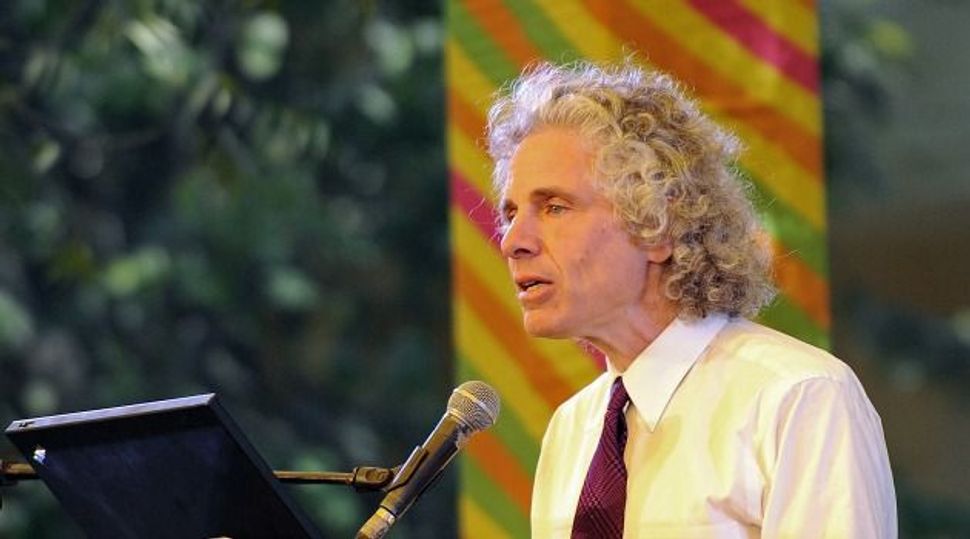 Style Maven: Steven Pinker is a professor of psychology at Harvard. Image by Getty Images

Steven Pinker, the Johnstone Family professor of psychology at Harvard, didn’t coin “language maven” (William Safire did, back in the ’70s, to describe himself), but he did more than anyone else to popularize the term. In a 1994 article in The New Republic called “Grammar Puss,” included in his subsequent book “The Language Instinct,” Pinker put it out there only to snatch it away: “Maven, shmaven!” he sputtered. “Kibitzers and nudniks is more like it.”

Pinker’s problem with the mavens was and is what he calls their bubbe mayses, or “fetishes, folklore, hobgoblins, superstitions, shibboleths,” such as not saying “I could care less,” when you mean “I couldn’t care less,” bending over backward to not split infinitives, and never using a preposition to end a sentence with. Many of these so-called rules, he writes in his new book, “The Sense of Style: The Thinking Person’s Guide to Writing in the 21st Century,” “were the brainchildren of self-proclaimed experts who cooked up idiosyncratic theories of how language ought to behave, usually with a puritanical undercurrent in which people’s natural inclinations must be a form of dissoluteness.”

The New Republic piece, written in admirably high dudgeon, did much to set the terms of the subsequent discourse on these issues. In “The Sense of Style,” Pinker not only expands on his position, but also provides a guide to scores of language and usage issues, helpfully sorting the bubbe mayses from the legitimate mistakes. And yes, Pinker — like all “prescriptivists” worthy of the name — acknowledges mistakes can indeed be made. So, on the one hand, he is perfectly okay with using “aggravate” to mean “annoy” (as well as the only sense accepted by mavens, “make worse”), noting that this has been done since the 17th century. On the other hand, it is definitely not okay to use “disinterested” to mean “uninterested,” or “nonplussed” to mean “unimpressed” or “unfazed,” which are basically the opposite of its original sense.

He actually doesn’t like the word “mistakes,” preferring “nonstandard usages.” Most of these, he helpfully writes, “are malaprops traceable to a mishearing, a misunderstanding, or a kitschy attempt to sound sophisticated. A general rule for avoiding malaprops is to assume that the English language never tolerates two words with the same root and different affixes but the same meaning, like amused and bemused, fortunate and fortuitous, full and fulsome, simple and simplistic. If you know a rule and then come across a similar one with a fancy prefix or suffix, resist the temptation to use it as a hoity-toity synonym.”

The right-wrong conversation has become pretty familiar over the last 20 years, so it wouldn’t do merely to repurpose it, especially in a book with such a grand title. And, indeed, this topic takes up only a chapter in “The Sense of Style,” the subtitle of which describes Pinker’s ambitious goal. Like a legion of others (including me), the skinny white whale he has in his sights is William Strunk and E.B. White’s “The Elements of Style,” which was originally published in 1959 and whose continual popularity is such that, as I write, the latest edition is number 51 on Amazon.com’s list of bestsellers. Pinker allows that much of Strunk and White is charming and even “timeless.” But, he says, “much of it is not.” How could it be, when the younger of its coauthors (White) was born one year before the turn of the century? The 20th century, that is.

Pinker aims not only to bring things up to date but also to bring honest-to-gosh science into the mix. “We have,” he writes, “a body of research on the mental dynamics of reading: the waxing and waning of memory loads as readers comprehend a passage, the incrementing of their knowledge as they come to grasp its meaning, the blind alleys that can lead them astray.” The coolest aspect of the book is the way Pinker brings this research to bear on matters of style. One concept I’ve already tried to incorporate into my own writing is what he calls “the Curse of Knowledge: a difficulty in imaging what it is like for someone else not to know something that you know.”

Although economists coined the term, it’s become a mainstay in psychology, relating to egocentrism, illusory transparency, false consensus and many other sorts of biases. In writing, overestimating the extent to which readers know what you know, share your opinions, and are amused and interested in the same things you are leads to all sorts of problems, most notably, baffling and/or boring the pants off them. Bearing this in mind can help you cut way back on the jargon, tangents, impenetrable ideas, and non sequiturs readers will encounter in your prose. Even if you’re mindful of all that, you need to contend with practical matters such as the amount of information a reader is able (studies show) to hold in his or her head at one time. Spoiler alert: Pinker advises breaking complex ideas into digestible parts.

Equally helpful is his take on psychologists’ notion of “functional fixity”: our tendency, once we become familiar with something, to think of it less in terms of what it looks like and is made of, and more in terms of the use we put it to. The problem? “We are primates,” Pinker writes, “with a third of our brains dedicated to vision, and large swaths devoted to touch, hearing, motion, and space.” So, whenever possible, tell your primate readers who did what to whom. He gives an example of a sentence plagued by the curse of knowledge, functional fixity, and much else: “Participants were tested under conditions of good to excellent acoustic isolation.”

Pinker’s fix: “We tested the students in a quiet room.”

Everyone who aspires to write the next Strunk and White (including me) ultimately comes up against a particular obstacle. You can get a sense of the nature of the obstacle, and the fact that I ultimately chose not to even attempt to surmount it, in the title I gave my book: “How to Not Write Bad.” That is, addressing writing problems and malaprops, while not necessarily easy, is doable — all the more so if, like Pinker, you’re a good reader and writer and have a strong theoretical starting point. But telling your lumpen readers how to become “Really Good Writers,” or “RGW,” well, that’s a Yao-Ming-grade tall order.

The key word in Pinker’s title actually has four meanings that are relevant to the project of becoming a RGW. There’s style in the sense of correctness and consistency (as in Associated Press style); the sense of clarity and grace (kind of the way Strunk and White used it); the sense of ornamentation and flair (“She dresses with a lot of style”); and the sense of identifiable individuality (the way we would talk about “Charlie Parker’s style” or “Monet’s style”). Pinker’s discussion of the first is solid; of the second, interesting but less than comprehensive; and of the third and fourth, almost nonexistent.

That’s a big bowl of missing. Pinker leaves out humor, presentation of self, rhythm, use of metaphor and other figures of speech; a mastery of high and low registers and the ability to fruitfully mix them; and resourceful and surprising word choice — as well as that notion of individual distinctiveness, which is as mysterious as it is important, and thus the hardest thing of all to get a handle on.

The closest Pinker gets is a chapter in which he presents passages from four writers he admires and proceeds to “reverse-engineer” them: to “think aloud as I try to understand what makes them work.” Thinking aloud usually isn’t a very good strategy on the page (or in the classroom), and here it becomes a sort of arm-wavey exercise that elicits Pinker’s own worst prose. After quoting some lines from the excellent New York Times obituary writer Margalit Fox, he writes, “Fox has found some mots justes and packed them into readable phrases which put the lie to the lazy excuse that you can’t sum up a life’s accomplishments — in just a few words.” Clichés alternate with merely flat phrasing in that sentence, jointly lumbering to an anticlimactic finale.

The best piece of writing Pinker quotes isn’t one he reverse-engineers. It comes from a man’s description of his college English teacher, written decades earlier:

“In the days when I was sitting in his class, he omitted so many needless words, and omitted them so forcefully and with such eagerness and obvious relish, that he often seemed in the position of having shortchanged himself — a man left with nothing more to say yet with time to fill, a radio prophet who had outdistanced the clock. [The teacher] got out of this predicament by a simple trick: he uttered every sentence three times. When he delivered his oration on brevity to the class, he leaned forward over his desk, grasped his coat lapels in his hands, and, in a husky, conspiratorial voice, said, ‘Rule Seventeen. Omit needless words! Omit needless words! Omit needless words!’”

The student, of course, was E.B. White and the teacher was Will Strunk. The winners and still champions.

Ben Yagoda is a professor of journalism at the University of Delaware and the author or editor of twelve books, including the new e-book “You Need to Read This: The Death of the Imperative Mode, the Rise of the American Glottal Stop, the Bizarre Popularity of “Amongst,” and Other Cuckoo Things That Have Happened to the English Language.”